Give that Detective the Right Ending

I missed it the first time it aired awhile back, but this past Sunday night, after watching an episode of the new series Unforgotten on Mystery!, I saw the final episode of the Inspector Lewis series.  I guess I just can’t get enough of these Brit mysteries series, even though I’ve been watching them since Mystery! first aired back in 1980. 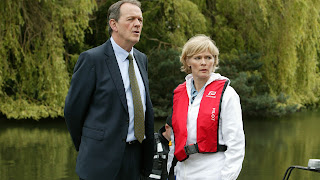 Anyway, in the last show, Lewis basically has to decide whether to let go from his job somewhat – at least enough to take an extended trip to New Zealand with Dr. Laura Hobson who is both his colleague and romantic interest (partner would be too strong a word since his actual investigative partner, Hathaway, really is the only person who deserves that appellation) – or stay on the job without pause until, well, he ends up in a box like the man he once served as assistant for, the incomparable Inspector Morse.  Anyone who followed the Morse series remembers its great final episode, where Morse, on a case and ill with a bad heart aggravated by his years of heavy drinking, dies - but not before uttering, “Thank Lewis for me”.  These prove to be his last words ever, and poignant ones they are since over the years of their working together he often could be rather callous, and even mean, toward his decent, talented, and always loyal underling.  There was no more appropriate way for the Morse series to end and for Morse, the lonely workaholic, to die.  It’s a sad ending but feels just right. 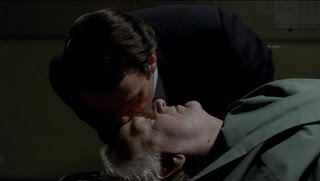 Lewis has a different personality than Morse. As a viewer, I think you’d feel the tone of the ending was off if the series wrapped up in any way like the Morse series did.  Lewis is a workaholic himself but a better adjusted human being than Morse.  He’s a widower and has two grown children. Over many episodes, he’s developed his relationship with Dr. Laura Hobson. He’s someone who should be able to find a balance in life as he ages, and indeed, after a brief dilemma where he considers not going on the New Zealand trip, Detective Sergeant Hathaway talks him round to common sense.  He goes on the trip, and the last we see of Lewis, he’s at the airport with Laura Hobson, heading toward the New Zealand bound plane.  A happy ending, you could say, but, again, the right one.  And it made me think that when a series comes to an end, that’s what I’m most looking for in a farewell to a character – a finale that fits what the character has been like.  The ending can be pleasant and grant the character a hopeful future, as with Lewis, or it can be a death that suits the character, as befalls Morse.  It can also be dark and depressing, (I’m thinking here of the last shots we have of Prime Suspect’s Jane Tennison, Helen Mirren walking away from the police station alone, retirement at hand, not even attending the going away party being held for her, facing a lonely and probably alcoholic future), but if that ending is true to the character’s history, it works, and I wouldn't want to see anything different.

When a series is good, you feel it’s so important it end correctly.  After sticking with Robbie Lewis for nine years (and that’s after his years with Morse), I was glad to see that his series did that.

Posted by scott adlerberg at 10:13 AM