I've liked David Hare's writing for a long time, so last week I set aside time to watch Collateral, the four-episode procedural he wrote now showing on Netflix.  It runs four hours and stars Carey Mulligan as Kip Glaspie, the detective inspector who's the lead on a London murder case.  Somebody has shot an Arab pizza delivery man, and Glaspie's investigation takes her into contact with a wide array of people who have complicated ties to each other. While serving as a good mystery, more a whydunnit than a whodunnit after episode one, Collateral adroitly tackles a number of topics relevant now in Britain.  Which is not to say these topics don't have relevance here, and elsewhere in "the liberal democratic West". The story touches on political isolationism, the refugee crisis as it involves countries like Syria, the exploitation of immigrants and refugees, the effects of endless war on those who've served, and the sexual harassment of women in the military by their male counterparts.  It's a heady brew.  And you might think that a detective thriller that incorporates so many hot-button topics would play like an issue movie, with the issues subsuming the thriller aspects. But David Hare is an old hand at this; he's been writing plays and scripts that weave politics and suspense genre elements for a long time. Except for one or two instances, particular lines that come across as didactic, all the political content is woven seamlessly and organically into the plot. Even better, each character, no matter what "side" they lean toward or what their core beliefs are, has some complexity.  This is the type of story where, quite clearly and with background given to each major player, "everybody has their reasons". 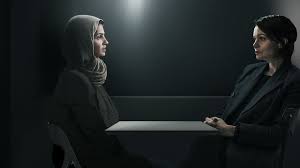 The first time we see Kip, she's awakened at night in bed by a phone call telling her about the killing of the pizza man.  She's lying in bed beside her husband, and when she rises from bed to go to work, we see that she is pregnant.  It seems like a nod to Fargo, but since watching Collateral, I've read that Mulligan was pregnant when she read the script and accepted the role.  David Hare, who'd not conceived of the character as pregnant, decided to simply go with her pregnancy.  As he put it, "It seemed to me that it was an ideal opportunity to say that there are women who proceed with their jobs and behave in a completely normal way and get on with it while being pregnant.  All I knew was that I didn't want to make a big fuss about it and that it should just be a fact that she is pregnant."  One of the refugees in the story is pregnant as well, so you have a sharp contrast between Kip, who knows she will be able to raise her baby in secure circumstances, and Mona, the Iraqi refugee, who is held in a detention center and does not know whether she and her newborn will be sent back to her homeland.  There are also a number of mother-children relationships in the story, from an MP's ex-wife and her young somewhat neglected daughter to the woman soldier at Collateral's center and her grieving mother.  An MI5 agent plays a key role in the plot, too, as does a British ex-military man who is a human smuggler.

Sound like a lot of characters? There are, and I haven't mentioned all of them.  But Collateral unspools smoothly, with scenes taking as long as they need to take and no sense of rush or confusion.  I should add that Kip Glaspie herself is engaging.  A onetime athlete, a pole vaulter, she does her job without histrionics or a pervading aura of gloom.  She doesn't have eccentric tics or a self-destructive habit.  Neither do any of the other police we see her working with.  I've loved recent series like River and Marcella, but it was refreshing to watch a police drama where the main character and her colleagues don't come with exotic psychological baggage.

Is there anything earth-shatteringly inventive about Collateral? No. But is it solid, engrossing, and thought-provoking all the way through?

We enjoyed it too!

Not reading right now as we just started last night. :-)