Excited to share that last year I signed a contract with Down & Out Books for publication of my novel, THE SPYING MOON. Constable Kendall Moreau had hoped to be assigned to the region where her mother disappeared when Moreau was just a child.

Instead, when an officer is assaulted and hospitalized Moreau finds herself assigned to a task force in a town on the Canada-U.S. border, miles from where she'd hoped to be.

Her co-workers either exclude her or harass her and there is reason to suspect corruption within her own police department. When the death of a teenage suggests a connection to the local drug trade Moreau is forced to decide who she can trust if she's going to find out the truth about the boy's death, who put her colleague in the hospital and the real reason she was transferred to Maple River.

The book is scheduled for release this September. 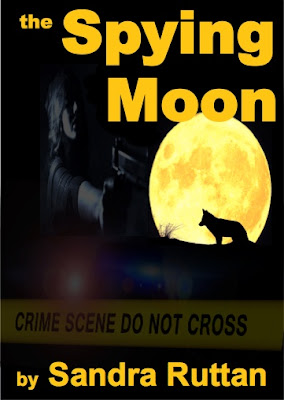 This is NOT the cover, but we are at that stage where I've been asked for my cover suggestions. This manuscript marked a turning point for me in many ways. I gave myself some specific goals and it feels timely in the wake of the #MeToo movement because it addresses reasons people are judged or excluded and presumptions people make based on race and gender.

It's exciting to think that Moreau's story will be in store shelves later this year.
Posted by Sandra Ruttan at 5:30 AM

Email ThisBlogThis!Share to TwitterShare to FacebookShare to Pinterest
Labels: down & out books, police procedural, Sandra Ruttan, The Spying Moon