"I talked about what a shit show 2017 was personally. Professionally it wasn't much better." - Joe Clifford, joeclifford.com 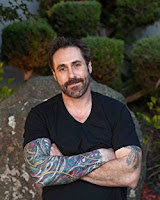 The one constant in life is change and usually only the passing of time tells if it was for the better. Weathering the storm depends on the strength and tenacity of who is being challenged. Author Joe Clifford knows all about challenges.

Seemingly always busy, Joe serves as acquisitions editor for Gutter Books, producer of Lip Service West, and editor for many award-winning anthologies. All that and he has collected a rich catalog of his own trophy-heavy novels, including GIVE UP THE DEAD, his current Jay Porter book.

Joe's life before, however, is a rockier tale. His childhood was tough; a lesson in how to be hard. As he got older he grew determined to put as many miles between himself and his troubled childhood as possible. He wanted to escape.

Escape can hide in many forms and after spending years as a heroin addict struggling on the streets of San Francisco, Joe pieced his life together and earned an MFA from Florida International University.

Around the same time, however, his first marriage was crumbling and he was injured in a serious motorcycle accident that nearly killed him. Two steps forward, two steps back.

Joe lumbered on and upon returning to the Bay Area joyfully began a successful writing career, married and started a family. Of course, life is never done teaching and this year brought many more tests and tragedies for Joe.


"I left my agency over the summer, not for anything they weren't doing-my agent got me five book deals in five years-who can ask for more? I reached a point where I needed to make a change."- Joe Clifford, joeclifford.com

"When I left my agency...I didn't exactly inundate the market with submissions. I had hoped my name might carry some weight. It didn't. I was back to square one...I stopped trying."- Joe Clifford, joeclifford.com

"Several other factors factored into my giving up. Like my brother dying...suddenly pushing on with my career didn't seem so important." - Joe Clifford, joeclifford.com

How do you feel writing has helped you during all the recent changes and challenges in your life?


This is always the rub, isn't it? Because as writers we process our grief and loss through words. My wife Justine just said the other day, something like, "I have to read your interviews to see what's going on with you." And it's true. I don't talk as much. Mostly because I am a WAY better writer than I am talker. I mumble a lot. I am more comfortable writing. There's also this idea that the traumatic and harrowing provide material. And that's true too. Happy lives don't translate to entertaining stories. Conflict and drama, tragedy fuel art, and since losing my brother, I can honestly say I've written some of the best shit of my life. The last Jay Porter deals with it. The follow-up to JUNKIE LOVE will deal with it. And now all that said, who gives a shit? I'd trade in all the books and good news, deals, to have my brother back, or to have my mom back (they can keep my father). But no one is giving me that choice, are they? So all I'm left with is the work.

And your legacy, of course. Your children are going to be proud and amazed when they hear your entire life story. Do you consider what your history will mean to them?

Yeah, I think about my history with them. Mostly because how the fuck am I going to tell them not to do drugs? "Yeah, well, sure it worked out for me. But you? No, you shouldn't do it." Good luck telling a teenager that!

You've authored six books and edited several anthologies. That's a lot of time spent writing. Of those creative experiences, which stands out the most in your memory?


Novels are like your children. There is only one acceptable answer: you love them all the same. Memorable? That's a little different. I could get cute and say WAKE THE UNDERTAKER, because it's also true in a way. I wrote that book while in grad school; it's the novel where I learned "how" to write a mystery. There's also the shit that was going on in my life at the time. I was in Miami (I am SO not a Miami guy), going through a horrible divorce, and I almost died in a motorcycle accident. Pretty fucking memorable! But it's tough to answer this question honestly without saying JUNKIE LOVE, the story of my addiction and life and how I got here.

Which of your own books do you enjoy reading the most?


It's funny. With each book I write, I get better. I'd like to think so, at least. I think the latest Jay Porter, BROKEN GROUND (June 2018) is a "better" book than the first in the series, LAMENTATION. Not to disparage my own work. I'm not knocking LAMENTATION; it's more that I know the character better, his world more familiar. My prose is tighter, cleaner.

All that said, I think THE ONE THAT GOT AWAY (December 2018), which will be the first in the new batch of standalones to be published by Down & Out Books, is my favorite to read. The best plot, mystery, reveal, etc.

"...I just signed a three-book deal with Down & Out Books to publish my three standalone novels. While writing Jay Porter, I would write and additional novel each year. These books, THE ONE THAT GOT AWAY, SKUNK TRAIN, and OCCAM'S RAZOR, are among the best things I've done. I love the Porter books but it's been especially frustrating to not have these three books out in the world. Now, thanks to Eric Campbell and Down & Out, these works have a home." - Joe Clifford, joeclifford.com

There is a new Jay Porter book coming in June of this year, BROKEN GROUND, but what does the Down and Out contract mean for the series?

I don't know. That's out of my control. If Oceanview wants another Jay Porter, I am happy to write it. But I can say this: it will be a new Jay Porter. I'd want any Jay Porter from Book 6 on to feature a harder, quieter, less complain-y Jay. Not that Jay doesn't have a lot to complain about. You see the Marlowes, et al, and they are hard and quiet and have their own cynical worldview. But you don't know WHY they are that way. I'd want a 6th Porter to have that same aesthetic. Except if you wanted to find out WHY Jay is the way he is, you can read 1 - 5 and learn the story of how a man was broken.

What can you tell us about THE ONE THAT GOT AWAY?

THE ONE THAT GOT AWAY is the story of Alex Salerno, a 29-year-old woman from Upstate NY, who was abducted 12 years earlier, the latest in a horrific string of abductions. She got away. They caught the guy. No more girls were supposed to die. Until another one did. Something like that. I can't remember the exact elevator pitch. It's based on this fucked-up story I once read in Cosmo. One of my friends thought it would be funny to sign me up for a free year. But the joke's on them. Because I got a book deal out of it! But it's a seriously fucked-up story. One of the worst things I've ever read and it shines an unflattering light on the worst of people. Being as writer, of course, I filed it away, thinking of ways to use this story to do what I do, y'know, "entertain" but illuminate a greater truth. That's what writers, artists, do, right? Mine tragedy, personal and familiar, to show we're not alone. At least I think that's what we do?


I've noticed a pattern. I think. You seem to favor female writers. Gillian Flynn. Paula Hawkins. You've also been very helpful to loads of female writers. Why do you think this may be the case?

That's really sweet. That makes me sound like a nice person! No, the truth is I don't have a demographic I help more than others. I help people who want to be writers because if I am in a position to help, I should help. I can't do much. But I DO remember before I got my first book published, how desperate I was to get my work out there and how helpless I felt. Now that I've at least cleared that hurdle, I hate seeing anyone else suffer or feeling alone or having something to say but not having the avenue to say it.

But, yes, in terms of what I read these days? Almost exclusively female. (I'm reading Emily Carpenter's Weight of Lies right now--SO good!) Flynn, Hawkins, Mary Kubica, Jamie Mason, Hilary Davidson, Shannon Kirk, Wendy Walker, Eileen Cook. There is just a ridiculous talent pool of women writing crime right now. I am also making up for lost time. Since I neglected half the population for YEARS. I used to only read white dudes with books from 1938 - 1955. So I'm catching up...

Your writing goes dark and I know you often joke about channeling the characters you are following. How do you jump from the dark back to the light? How does your current family life, stable and happy, help your writing?

Ha! I do! I just got a pack of fake cigarettes because I like to chomp on them as I write Jay Porter, who smokes like a fiend. But that light and dark thing, man, it's real. I remember reading where Gillian Flynn, when she was writing Gone Girl, had to leave herself a reminder on her desk, something like, "Leave the darkness upstairs," because she was taking Amy Dunne downstairs to her husband. (Personally I would love to be married to Amy Dunne, but that probably says more about me.) I know I drive (my wife) Justine crazy when I am writing Jay Porter, who, let's face it, isn't the most pleasant guy to be around. And, yeah, it does affect me and my relationships. You spend all your time in someone's head, how can it not? I'm not sure one sets out to write dark. It's whatever interests you and draws your attention. I've always been drawn to those darker places.

Posted by Marietta Miles at 8:54 AM

by Scott D. Parker Exciting news! The first Calvin Carter team-up has arrived. With the publication of Cash Laramie and the Sundown Express ...