Eighty-five years ago today, Doc Savage landed on magazine shelves for the first time and, one might argue, helped change popular culture all the way up to the present day.

The brainchild of Street and Smith publisher, Henry Ralston and editor John Nanovic, Doc Savage was the brighter answer to the magazine’s other runaway bestseller, The Shadow. But where the Knight of Darkness fought crime at night and in the, um, shadows, The Man of Bronze was a different type of hero. He strove “every moment of my life to make myself better and better, to the best of my ability, that all may profit by it. Let me think of the right and lend all my assistance to those who need it, with no regard for anything but justice. Let me take what comes with a smile, without loss of courage. Let me be considerate of my country, of my fellow citizens and my associates in everything I say and do. Let me do right to all, and wrong no man.” He was a paragon of virtue, the kind of person kids could look up to and revere.

Clark Savage, Jr. appeared in 181 adventures from 1933 to 1949, mostly written by a single author, Lester Dent. In nearly all of them, he was accompanied by his five stalwart brothers in arms: Monk Mayfair, Ham Brooks, John Renwick, Long Tom Roberts, and William Littlejohn. Each man of the Fabulous Five was an expert in his chosen discipline, but Doc bested each. Doc had trained his mind and body since birth to be a superman. He even had a Fortress of Solitude where he would retire from time to time to study. Invariably he would emerge from his seclusion with some new invention, knowledge, or something else to benefit humankind. His headquarters on the 86th Floor of the unnamed building in New York (but we all knew was the Empire State Building) was a palace of gadgets, technology, and books where Doc and his comrades planned their adventures. And his villains were trying to take over the world long before Lex Luther or Blofeld.

If you’ve read this far, I think you will recognize some names and terms. The obvious descendant is Superman himself. Extrapolate, if you will, what Superman wrought: Batman, DC Comics, other superheroes, Marvel Comics, novels, toys, merchandise, movie serials, major motion pictures with superheroes, and many other things that shape large chunks of popular culture. In fact, the biggest superhero movie to date, The Avengers: Infinity War, can trace its roots all the way back to a pulp magazine character that debuted eight-five years ago today.

I am woefully deficient in my Doc Savage reading, but then just imagine reading one novel a month at the pace Lester Dent and a handful of other co-writers drafted the books. You would finish in 2034! But these stories are fantastic to dip into from time to time for the breathless sense of adventure and wonder.

Generations of readers grew up on the original pulp magazines while other generations were raised on the Bantam reprints of the 1960s and 1970s, with Frank Bama's depiction of Doc with a widow's peak and a tattered shirt. 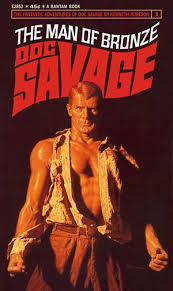 Nostalgia Ventures reprinted the entire run, adding historical commentary. And Will Murray has been using abandoned outlines from Dent’s personal papers to write new adventures, including one in which Doc teams up with The Shadow, bringing the entire saga full circle.

Now, in this 85th year of Doc Savage, I plan to read a few more adventures, including the black-and-white comics from the mid 70s as published by Marvel Comics. I'll be reviewing these yarns as I get to them, beginning with The Polar Treasure next week.

What are your favorite Doc Savage stories? How about a Top 10 list?
Posted by Scott D. Parker at 1:00 AM

I've never read a Doc Savage (sad to admit), but I often talk about the series in writing workshops as context for introducing Lester Dent's Master Plot. I appreciate the post here and look forward to checking out the books themselves!

That's really nice you teach the Dent Formula. I've used it, too. What I really appreciate is its scalability: instead of 1500 words for Part I, you can write 15,000 (and fill in accordingly). Are there any other comments on the Dent Formula you talk about?

As far as the books are concerned, most are single adventures and can be read in any order. That said, THE MAN OF BRONZE is the first and acts as the origin and sets up everything. After that, just find stories that interest you and dive in.