Research Without a Cause

Today I visited a neglected cemetery and the site of an assassination.
No reason.

Well, other than to satisfy my morbid curiosity. The cemetery is sometimes called the Mulatto Bend cemetery because it sits at the south end of the road with that name, in Port Allen, Louisiana, over the magnificent Huey Long bridge from Baton Rouge. It is also called the Benevolent Society Cemetery, and searching for either of those names will get you sent to the West Baton Rouge History museum, a ten minute drive away. So, don't use Google.

Last night I read the book Fragile Grounds: Louisiana's Endangered Cemeteries, by Jessica H. Schexnayder and Mary H. Manhein, which had been sitting on the night table in my mother-in-law's guest room, and learned that Slim Harpo was buried not far from where they lived. Maybe you don't know Slim Harpo, but he's most famous for the deliciously salacious blues tune "I'm a King Bee," which the Rolling Stones covered, but did not improve upon. The original is here, and Slim really slings the innuendo in it, and his nasal voice gets sweet as honey as the tune goes on. His other killer hits include "Rainin' in my Heart," "Got Love if You Want It," and "Shake Your Hips," which cement him as a blues king in my book. So I went to see where he was interred, and had a little adventure. 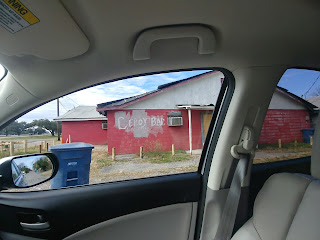 First, Google sent me to the museum, where I saw some wonderful restored Louisiana buildings, like a Creole Cottage, a shotgun shack, and so on. But no Slim. So I choogled and I Googled, and found an article by an LSU music historian who found Harpo's final resting place. Even after reading it, I made the same mistakes the author did, and took a right on Mulatto Bend Road and followed it past settling old shacks and rusty playgrounds and one dive called Leroy's Lounge, with the Lounge crossed out and reduced to Bar, maybe when Leroy tired of customers lounging around and not drinking. The cemetery is at the end of the road on the other side of the highway, so I had to race across traffic, right past the historical marker that Baton Rouge residents erected a few years back to honor the native musician. 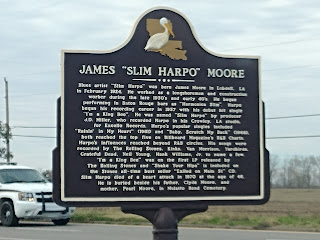 At the end of the road I found the cemetery, and walked its length several times in the cold. The cold? What did you say, Tommy? You're in Louisiana! And yes, the state is under a five day cold snap that's got them under a hard freeze warning, and covered them with four inches of snow last week, during which residents delighted in sledding and making snowmen. And me without my peacoat! I walked until my hands were numb, eyeing the concrete sarcophagi, looking for James (Slim Harpo) Moore. I used Find a Grave to no avail. I read the LSU article closely, and followed his footsteps. He found a small section dedicated to the Allen family, and said he saw a tomb covered in harmonicas along the fence from that vantage point. When he visited, there was a sign saying that the eldest Allen was a straw boss on a plantation, but that sign is long gone.

But I found a few Allen headstones, and on tiptoe, spotted the only white tomb decorated with mementos. I had walked past it at least five times, but from the path, you can't see the engraved marker or the harmonicas. It was a little anticlimactic, but it got me to visit parts of town I'd never have found before, and Leroy's Bar will help my description of a similar place Jay Desmarteaux makes himself unwelcome in. And I haven't listened to Slim Harpo in ages, and now I have him on repeat. The cemetery itself is good story fodder as well, and I got a feel for the city I'm writing about. All because I wanted to give my respects to Slim Harpo. 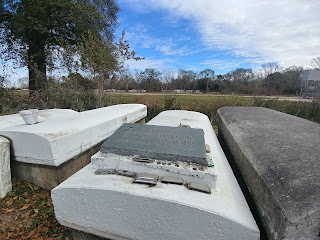 After seeing the King Bee, I went to see the Kingfish. That's Huey Long, of the eponymous bridge. He commissioned the new Louisiana State Capitol Building, the tallest such state building in the United States, finished in seventeen months, but not soon enough for him to still be governor when they cut the ribbon. Pity, because he had a Governor's Elevator built that runs to the top of the 29 floor monstrosity, the Empire State Building of the South, as no one but myself ever called it. Mr Long was a populist politician who inspired the novel All the King's Men, and ran on the slogan "a chicken in every pot, and every man a king" ... until he was assassinated in the new capitol building, just outside the Governor's Elevator. Long shifted taxes from the working people to businesses and the oil barons, was impeached, but kept fighting until they murdered him. His legacy includes free schools, abolishing the poll tax, free school busing, charity hospitals, infrastructure, and of course some patronage, but anyone hated by rich men and the Klan can't be all bad. 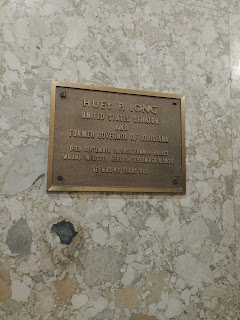 The hallway where he was gunned down is pocked with bullet holes, as his bodyguards fired 60 rounds into the assassin, who was killed on the spot. Long died two days later. The bullet holes are patched except for one in a column, which you can see here. Today Louisiana is back to being "business friendly." 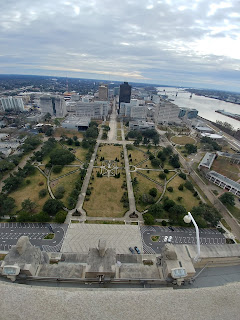 I didn't get quite as much inspiration visiting the capitol building, but from the observation deck I got a wonderful view of the city, and noticed that the park around Huey Long's statue looks like an ornate symbol of power meant to keep him imprisoned... so maybe there is a story in there, somewhere. When I got home, my mother-in-law told me that her husband's uncle Owen had been in that hallway when Huey Long was gunned down and saw it all. I wish I'd gotten to meet him. This family's steeped in Louisiana history. My wife's memaw saw Bonnie & Clyde's corpses paraded through town after they were ambushed. Her cousin was one of the sheriffs who killed them. I wrote about that for Criminal Element.

So the point of this is, get out of the house and do frivolous things, especially if you haven't been writing as much as you'd like. I've been averaging 500-1500 words a day for the past two and a half months, taking some breaks here and there, but steadily chunking along with Riff Raff, Jay Desmarteaux #2. I'm enjoying it, but I recharge every once in a while by getting out and doing things, whether it's shopping, stopping in Bowie's Outfitters to buy a knife for no reason, or visiting a bluesman's grave. Some people can write inside a cell using only their imagination. I won't do that until I have to.