Happy 10th Anniversary to Noir at the Bar! 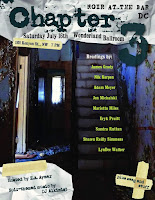 What is Noir at the Bar?

Noir at the Bar functions feature both local and international crime fiction authors reading their work before a live audience.

Truth be told, my initial attempt to jump into a N@B reading felt very covert. Mysterious. I reached out to a writer - friend I knew had participated in the events. This friend said to message another friend and that friend "might know someone who knows something."

I began to wonder if N@B was actually code for something far more nefarious. "First rule of N@B is never talk about N@B." Would we be expected to beat the brains out of each other in front of sweaty, cheering patrons?  More importantly, would the audience throw money at the winner? Or would the night end with writers taking part in a ritualistic group-branding?

Fortunately, there were no forced tattoos and the only violence happened in the dark stories told.

Noir at the Bar is a chance for writers to connect and readers to discover.

In 2008 Peter Rozovsky organized the inaugural Noir at the Bar in Philadelphia. The idea was a success and soon Jedidiah Ayres, Eric Beetner, Glenn Gray, Scott Phillips and Todd Robinson had taken up the flag, allowing the concept to spread coast to coast.

Ten years later, Noir at the Bar events have been held in cities around the country and world, including New York City, Los Angeles, San Francisco, Miami, Vancouver, and many more.

Washington D.C. host Ed Aymar and Baltimore organizer Nik Korpon are currently organizing the Second Annual N@B Crawl with reading events taking place on a single weekend up and down the east coast. The Crime-Fiction version of a Phish tour. Maybe. 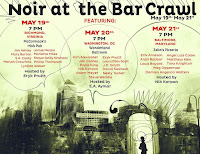 Events can take place in a bookstore or a pub. Several writers can read or only one. There might be a question and answer component or perhaps it becomes a themed event. Published and unpublished writers gather together to hear new ideas and stories. Fans of the genre meet new favorites. Communicating and socializing, unnatural and disgusting when first considered, can be advantageous, if not pleasant.

My first Noir at the Bar was Washington, D.C. almost two years ago. E. A. Aymar was the host and organizer. It was a great night and led to Ed Aymar asking me to assist in organizing the first Virginia function. New cities are climbing on board.

Noir at the Bar is one of my favorite events, professionally and personally. I highly suggest all hobbits, I mean writers, budding and otherwise, get involved.

Posted by Marietta Miles at 7:02 AM

And alcohol. Don't forget the alcohol.