By Claire Booth
Last week, I talked about the wonderful criminality on display during the Sacramento Archives Crawl, where local libraries and other organizations open up their seldom-seen collections to the public. Wanted posters, Folsom State Prison locks, and notorious criminal trading cards were all on display.
But there’s more to these collections than just criminals. Artwork, literature, maps – all sorts of fascinating and beautiful things were out for us to see (but not touch).
The California State Library owns many such treasures, including Birds of America, the towering illustrated work by James Audubon. His artwork was transferred to copperplate etching and then printed on handmade paper. Each engraving was then painted by hand. The printings took from 1827-1838 to complete. And that doesn’t even count how long it took Audubon to do the original paintings in the first place. 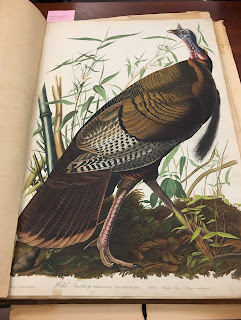 It’s astonishing how extraordinary this book is. The library had one volume out, and it took up almost an entire table when open. It was more than 39 inches tall and 25 inches wide. A curator told us it weighed between 75 and 80 pounds. And it are three other volumes in the set. There are only 120 sets known to have survived. The State Library bought its copy in 1866 for $500. Recent auction sales of complete sets start at almost $8 million and go up to more than $11 million. And I can see why. These books would be worth every penny.
Mere feet away was another amazing piece of history. A first complete edition, dated 1788, of The Federalist: a collection of essays, written in favour of the new Constitution … 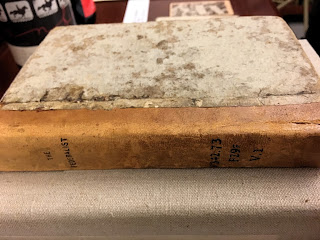 One of the most prolific authors of the Federalist Papers, as every now knows thanks to a certain Broadway musical, was Alexander Hamilton. This particular copy was owned by his father-in-law. Philip Schuyler’s name is handwritten inside the cover. This had me humming “The Schuyler Sisters” for the rest of the day. 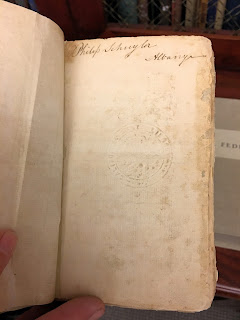 It’s no surprise that I love books. But what I really love is old books. I have a few in my library that date from the early 1800s, and one from 1794. I even have a copy of The Federalist, (not a first edition) in much worse shape than Mr. Schuyler’s is. That’s why I was thrilled to see another displayed treasure at the state library. A Bible, printed in 1501, that is used by governors and other state officials for their swearing-in ceremonies. 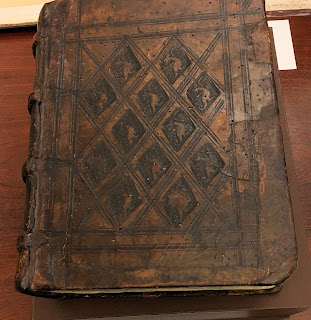 The first to use it was Governor Newton Booth (no relation!) in 1871. The State Library acquired the Bible sometime in the 1850s. I wish I could’ve opened it. There’s nothing like the smell and feel of an old, well cared-for book.
The California State Library sent out these cards for artists, writers, and musicians to fill out. This one was filled out in 1906 by some guy named Samuel Clemens. He had a nom de plume as well. And so today, I’ll leave you with this. A first edition of the story that first made that name famous. And a piece of California history like no other.