Documents and Artifacts and References, Oh My


By Claire Booth
Recently, I had the opportunity to participate in an “archives crawl.” It’s like a pub crawl, but with less booze and more criminals.
Several Sacramento institutions band together and do this every year. They pull out items in their collections that are otherwise inaccessible. This year was the first chance I had to go. A friend and I started at the California State Archives, which houses everything from Spanish and Mexican land grants to state and local government records and genealogy information. It also has – right in my wheelhouse – extensive court and prison records. And some other items that bring the past alive in great ways.
For a non-fiction book proposal I wrote several years ago, I spent a great deal of time in the archive’s big circular reading room. I was able to go through the entire original handwritten trial transcript of a death penalty trial from the 1880s. (Penmanship was WAY better back then.) For another project, I read the capital trial transcript of a 1950s killer and subsequent prison records and court appeals. (Sadly, they’d moved on to typewriters by this point.)
Next, we moved on to the California State Library, across from the Capitol. It’s the central reference and research library for state government and the Legislature. Okay, that’s not terribly exciting. But this is: it collects and preserves priceless historical items. And many of those are on display to the general public only this one day a year. It also has fun with its enormous accumulation of knowledge. 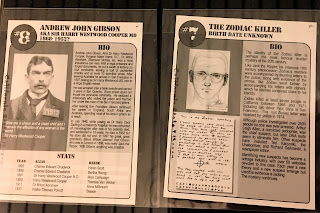 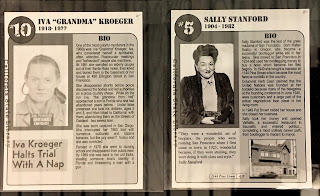 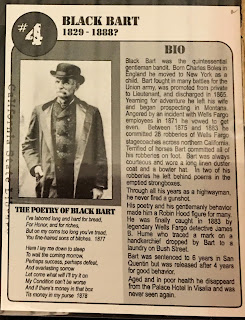 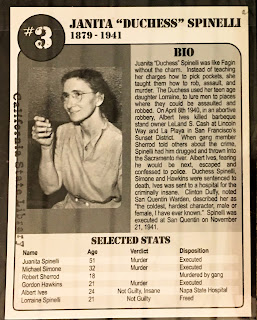 They had the newspaper microfilm archive room closed. Closed! I spent a lot of time there researching the same two capital cases I talked about above. I’ll admit, it’s not the most thrilling
room, packed with nothing but filing cabinets and microfilm readers. Oh, but the information! The collection has more than 2,200 newspapers, and it includes at least one title from each of California’s 58 counties. It dates back to 1846. It’s heaven, to me, at least.
The other two majors organizations that participate are the Sacramento Public Library and the Center for Sacramento History. Next week, I’ll show you some of the non-crime related wonderfulness that was on display. (Hint: some of it relates to a jumping frog from Calaveras County.)
Posted by Claire Booth at 10:36 AM