Why Aren't You Watching Narcos?


Look, I know these things are subjective and my own viewing habits are fairly narrow, but I'm going to go out on a limb and say this: Narcos is the best show on Netflix right now, and possibly, the best show on any network at the moment. So why is it I never hear anybody talking about it? And why hasn't it won very many big awards?

Or maybe, people are talking about it and I just missed it. I tend to miss a lot.

I've tried to avoid spoilers in the rest of this post but if you're concerned, maybe just go watch the show.

I'll admit, the first season fell into what I call the "homework TV" category. While that sounds like a bad thing (and in some ways, maybe it is), when I refer to something as "homework TV" I generally mean it requires a little work on my part to get into. Game of Thrones is, for me, a classic example of "homework TV" because there are so many elements I have to keep track of: characters, families, who sits on what throne, that sort of thing. I love the show, but sometimes I just don't feel like watching it because it requires more brain power than I'm willing to give.

At this point, you might be asking yourself: How lazy can a person be? But hey, I've never made a secret of my poor attention span. The Internet has only made it worse.

Okay, so at first, Narcos was "homework TV," for a couple of reasons. One, much of it is in Spanish and requires subtitles for people like me who are less than fluent in the language. I don't have anything against subtitles except that sometimes they detract from what's happening on the screen. Second, like Game of Thrones, there are a lot of characters to keep track of because it follows a few cartels and government agencies. This, combined with the Spanish, often had me going back to ask, wait, who is this guy? Is he Cali Cartel or Medellin? Is he part of the Policia Nacional or local? These things matter because the jurisdiction of a particular law enforcement agency are sometimes central to the plot.

This is no fault of the show or its writing, I promise you. Based on true events, Narcos is a complex, beautifully acted and well-plotted drama that often has me on the edge of my seat. I wasn't sure how I'd like Season 3, given that the show started out being about Pablo Escobar. In this case, history is a spoiler because we know, more or less, how Señor Escobar died in real life.

Speaking of Señor Escobar, the actor who plays him, Wagner Moura, is magnificent in this role. He was nominated for a Golden Globe in 2016 and, much as I love Jon Hamm (let's face it, I'm a sucker for a pretty face), Moura was robbed. In his portrayal, he struck the perfect balance between vicious psychopath and loving husband and father. Escobar himself would've been honored.

As it turns out, Season 3, in which the Cali Cartel takes center stage, is as strong as the first two seasons and in some ways, I liked it better. Although it lacks a single character as intense as Moura's Escobar, it has a Sopranos/Godfather-like quality, especially because one of the characters it focuses on is a key player in the cartel but desperately wants to get out. He's so good at his job that his employers won't let him. Picture Michael Corleone saying "Just when I thought I was out, they pull me back in." Only in this case, the stakes are far higher for the individual in question.

Once again, the writing and acting is top notch. This cast is multilingual and the performances are absolutely compelling. It helps that I've had a crush on Pedro Pascal, who plays DEA Agent Javier Peña, since his ill-fated appearance in the above-mentioned Game of Thrones, but good as he is, he's not the best actor in the cast, not by a long shot.


If you're looking for a series featuring strong women, Narcos generally isn't it. Part of it is the time and culture they're portraying, of course. And this isn't to say that the women in the series are weak, they just don't take center stage like the men do. You know, like in real life, 2017 USA. That said, as secondary characters they're a bit more nuanced than I see in a lot of popular television shows, which is something to applaud. 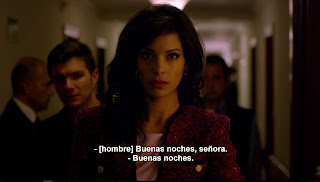 Sometimes, I have to wonder how much I miss in translation. Considering how much I love the show based on the subtitles, I have to assume the dialogue in Spanish is that much better. I confess to practicing my Spanish as I watch the show, and now, as we finish Season 3, I have a much firmer grasp of its profanity and drug lingo. One must ask oneself how many times the word puto can be uttered in one scene. Answer: a lot.

I hope I've convinced you to give Narcos a chance if you haven't already. Since my husband and I've spent the last week or so watching the latest season, it's heavily on my mind and I want you to love it as much as I do.

Note: As I was writing this post, I was looking for video to include and learned that Carlos Muñoz Portal, a Mexican location scout for Narcos, was recently murdered in a violent region of Central Mexico while looking for filming locations. I'm terribly saddened by this news. Condolences to his family and friends.

Second note: As I was finishing this post, my brother notified me that Steve Murhpy and Javier Peña, the agents who took down Pablo Escobar, and on whom Narcos is based, are speaking at a nearby venue next week. Of course I bought tickets.
Posted by Holly West at 3:00 AM

Hey Holly - please tell Javier Pena hello from all of us - and take photos!

Well, that sounds swell. Adding to the queue. Thanks

as great as Wagner Moura was, S3 is the best yet - the narrative is tighter - show's coming into its own. Less voice over is a good call.

I really did love season 3. And I don't miss Boyd Holbrook AT ALL. He was my least favorite part of the 1st 2 seasons.