David Nemeth is a gift to us all

David Nemeth is doing a thing what needs to be done. He's a one-man machine with his goddamn INCIDENT REPORTS.

Each week this mother fucker is posting an amazing write-up of what the hell is going on in the crime fiction world, mostly in the "small press" realm. 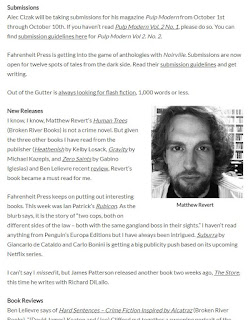 Most of us (yeah, me included. fuck off) have our heads up our asses. Nine out of 10 author newsletters I subscribe to have something like "What Coffee I Was Drinking When I Wrote My Beautiful Words of Beauty Today," complete with links to some schmuck on Goodreads who said some nice words about you and your book because, honestly, why would I care about something that wasn't you, author?? Gawd, we authors can be such self-indulgent cockcanoes, convinced that people want to read the ways whatever goddamn 100-year-old celebrity what died this week influenced said author. Dear Author, No one gives a shit that the first time you wanted to be a writer was when you saw Sir Rupert McDickdoozle in the 1968 film noir "Dark Darknesses." Who gives a shit?

David Nemeth is helping spread the word about other authors, and I give a shit about that. So I grabbed my cup of Death Wish Coffee that I was drinking to honor the memory of Harry Dean Stanton, whose performance in The Avengers: Hulk on a Plane made my balls soft and ever so delicate, and I walked my scabby ass over to the email machine to ask Nemeth some questions.

Sam Belacqua: The fuck made you start this weekly report?

David Nemeth: I don't think I would have ever started "Incident Reports" without the crime fiction community being so welcoming and supportive of the book reviews I was doing. Once I realized that it was impossible for me to keep up with all the new books coming out, a weekly series was a way for me to at least mention them. That was its genesis, but I then I added book reviews, short stories, and articles I read because I'm a glutton for punishment.

SB: What the fuck is it with this weekly shit? That's a fuckload of work, man.

DN: Weekly, damn, yeah it is a lot of work. I did four weeks of dry runs before I published the first one to see if it was a doable thing. It's tough, but I have two things going for me: an understanding and supportive wife who I don't deserve and only one kid, who is in college. So I've got some free time. If anyone cares, technology-wise I am using Newsblur for RSS feeds and Instapaper to store articles. I just started using Scrivener to write the posts using Markdown and that has sped things up.

SB: Yes, people care about that tech bullshit. It's a goddamn nerdfest around here. Christ, in the time it took you to answer that question, seven douchenozzles have written blog posts about using Scrivwhateverthehellyousaid to write their novels that no one will ever publish. Speaking of writing, what kind of creative shit you been up to?

DN: I'm trying to write some short stories, and by trying, I haven't carved out the time just to sit down and write. I'll get there though, but I'm thinking about it at least. Instead, I'm reading, doing lots of reading, and binging Shameless with the Missus.

DN: The most popular thing I've written on my blog was my post on the death of 280 Steps. I still miss them but hate the way they went out. BTW, can Hinkson ever find a publisher that will stay in business to keep Hell on Church Street in print? That book is the balls. What I really enjoy is when I recommend books and people dig them like Marietta Miles's Route 12, Paul Heatley's Motel Whore, or Lina Chern's Sparkle Shot.

SB: Anyone been a jackass? Any pushy authors? I want names and home addresses, goddamnit.

DN: Luckily, I've been under the radar so I haven't gotten bombarded. Will this article take me to the next level? I will say that the big publishers are the worst at rancid promotion on Twitter. How many times do big-time authors, authors I thought I respected, shill for a book that sucks? I hate that. At least with small presses, if a book isn't fantastic, you can see the effort and talent there. I'll support that over a shit-ass book from a major that was only written for a TV or movie deal in mind.
**
Thank Zeus we have this mother fucking David Nemeth showing us how it ought to be done. He's saying, "Hey, there's this cool thing someone else did. Go check it out." I mean, fucking hell, man. That's the shit right there. Pay it forward, or whatever that bullshit is.

If you're doing newsletters and you aren't helping readers discover people who aren't you, then maybe you can take a lesson from David Nemeth's INCIDENT REPORTS.

And, by the way, if this mother fucker ever puts up a tip jar on his site, buy the man a drink each month. Hell, he's working his ass off for you people.


PS - Dear Author, I didn't mean that your author newsletter was bad. You're a goddamn glorious snowflake & everyone loves you so hard.

PPS - I swear to whatever god you love that if you see Nemeth's blog and your first thought is that you ought to send him your own book for him to review, then you're a goddamn monster.
Posted by Unknown at 3:00 AM

Great interview, David. Thanks for the work you do on authors' behalf. And I hope you decide to spend a little bit of time writing your own work, if that interests you (and it sounds like it does). But reading is a great way to stoke one's own creative fires.

Hey Sam, do you have a newsletter? Where do I sign up?

I'm sure there are interesting parts of this interview, but I could just not get past the language.

Why is it necessary to use so many bad words?

The Lord God did not give us mouths and language just so we could use the same four-letter words over and over.

I will pray for you and hope that you learn to expand your vocabulary. But I shan't be returning to this blog.

Holly, There's a link on the Equifax site to sign up.