Hunts Point is the second book in the Sam Free series, following hardboiled on the heels of 2014's Taconic Murda. The first novel introduced Sam as a flawed detective, trying to hold on to some integrity in a police force, and criminal justice system, that pushes people to cheat and compromise. Gribetz showed a strong grasp of what makes hardboiled fiction work, with tense scenes, fast pacing, and dialogue that feels authentic. 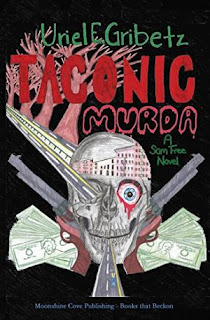 With Hunts Point, Gribetz made a decision I really appreciated as a reader. He didn't stand still. The book isn't a retread of the first, and Sam Free has been allowed to move and change. That's a good thing for the reader, but a bad thing for the character. Sam's life has fallen apart, and he carries the damage from the choices made in the first book. Sam is no longer a cop, which moves the series from semi-police procedural, to straight-up PI.

Sam is hired to investigate a murder, but there's a key difference. The 'killer' has already been found, and Sam's job is to prove him innocent. From this start, Gribetz doesn't hold back in piling more misery onto his character, throwing in twists and surprises to constantly turn up the heat on our protagonist.

To celebrate the release of Hunts Point, I kicked everybody out of the DSD clubhouse for an hour, to have a quick chat with Uriel E. Gribetz. 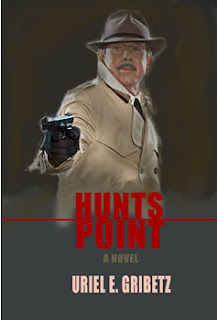 JS: Sam Free fits very much into the hardboiled tradition of damaged heroes. Characters who try to do well, but they have something in themselves that’s just as broken as the world they see around them.

UG: I think these characters resonate with us because all of our lives are such a struggle.  No matter how much we may have in each and every one of us there is strife.  I want my reader to identify with Sam’s struggles in a universal way. He is everyman/woman. I think of myself as a reader.  What do I like to read? Is there no better feeling in the world to pick up a book and become literally mesmerized.  I strive for this.  I want the reader to be entertained most of all, and I think readers are entertained by watching others struggle.  It’s sort of like looking into another person’s life-another’s fish bowl, but I don’t think struggle in one’s life is despair there is growth and beauty to the process.  Truth is beauty, beauty truth. That’s why I think we, who live in a broken world, can relate to Sam’s struggles.  That’s why crime fiction is universal in its appeal to everyone because it captures the human condition in a way that the reader can relate to.

JS: Two books into a series, what lessons have you learned about building a lead character?

UG: What I’ve learned is how important it is to develop the characters around the lead character.  I call them my players.  It’s my crew that appear and reappear throughout the Sam Free series.  There is Celeste Santiago the Assistant District Attorney. David Gold the defense attorney, who rents a store front from an old Bronx power broker named Feldman. Celeste Santiago and David Gold were romantically involved. There is McBride and Ryan the thug cops built like lineman.  In the next Sam Free novel, Frank Cortez, reappears.  Cortez was Sam’s old partner when he was on the job. The stories of these players and their interaction with each other fuels the development of the lead character and, of course the story.Sure you dig deeper and deeper into your lead character the more you write about him. It’s an evolving process. Sometimes I don’t know what Sam may do in a particular scene until I start writing it. The more I know a character the more freedom I have with the character.

JS: The book, and character, is very firmly rooted in the Bronx. Hell’s Kitchen had Matt Scudder, Brooklyn had Moe Prager. Is there something specific to the Bronx that you hope to get across to readers?

In the Bronx the bad guy doesn’t always get caught and go to jail.  They do sometimes get away with doing bad things. It’s a different type of morality.  Do people get what they got coming to them? Absolutely, but in a different kind of way and not always in the way that’s expected.  Hunts Point ends that way. I call it Bronx Justice.

JS: That’s a book title, right there. The plot starts with a question of a wrongful conviction. A sense of corruption and injustice seems to inform the whole book. Do you think Crime fiction is the best vehicle for addressing these issues?
UG: I think so.  Corruption and injustice are rampant, and the people who are corrupt get away with it.  It’s not always black and white. There is always a grey area.  There are certain people that run the show.  They are the power elite and they do pretty much as they please. We see it every day.  Isn’t it true that if you are accused of a crime  and you have unlimited resources to spend you can beat the crime not matter how guilty you are? If you’re rich enough you can get away with anything? Isn’t that injustice?

JS: How much of the plot comes from your own background as a public defender?

UG: I guess when you have worked in the criminal justice system for along as I have you realize that there are certain people of power that you really don’t want to mess with.  These are the people who really don’t want them to know your name.  I believe if someone in power was really out to get you they could. I have seen it happen.  That’s why I prefer to blend in and not stand out from the crowd so that I’m noticed.

JS: Do you think that background makes you see a crime novel in a different way to writers who’ve never walked the walk?

UG: I’ve seen the true darkness of the human spirit both in what one human being afflicts on another and the suffering that people experience.  It has changed me.  I think that this in my writing.

JS: What was the biggest challenge for you writing this second book, and how do you overcome it?

UG: It’s ironic but I wrote Hunts Point, the second Sam Free novel, first.  After I finished Hunts Point, I wrote Taconic Murda, my first novel.  After I finished Taconic I went back to Hunts and wrote it from the point of view of Sam Free.  My next Sam Free novel titled 1275 Webster I wrote quite some time ago as well.  Now I am going back to it.  I tend to write like that.  I’ll finish something and put it aside and then go back to it.  Sometimes getting distance from a piece gives me more objectivity in the revision process.

JS: The book moves pretty fast. You have a good sense of when to throw twists at the reader, and you stack them up in a way that keeps us guessing. What are your influences in crime fiction? If books weren’t shelved alphabetically, which other authors would you want the Sam free books to sit next to?

UG: Elmore Leonard comes to mind.  His noir style is a big influence.I’m always reading. The more I read the more in awe I am of how many talented crime writers there are.  I think the style of the crime novel continues to evolve to adapt to the fast paced world we live in.  We live in age of instant gratification.  With the internet everything is at our finger tips so the crime novel has to be quicker paced to keep up with it all to hold the reader’s attention. Recently I have been reading Max Allan Collins and Robert Crais and I marvel at their writing.

In the end it’s Ed McBain and the 87th Precinct mysteries.  I think I have read most of them. The way McBain  intertwines his characters lives with the plot line of the story is what I aspire to. What a great story teller he is.