Ever since last week’s column discussing my experience during Hurricane Harvey, I created an impromptu series of posts focusing on my little stretch of west Houston. Here is Part 2 and Part 3.

What characterized this week was plain and simple normalcy.

My boy went back to school on Tuesday. His school is out in Katy so the commute was interesting considering the carpool dad (not me) would have to find a way to cross the flooded Buffalo Bayou. The answer was the same for most folks in west Houston: go out to Grand Parkway 99. I heard some insane stories of multi-hour commutes. Houston’s traffic is already legendary. The post-Harvey traffic will likely be the award winners for years to come. A friend on Facebook lives only 2 miles from her hair salon, but those two miles involve crossing the bayou. This week, it took her 1 hour and 45 minutes to get to work.

I have the luxury of living close enough to my office that I could walk or bike, but I’ve not even had to bother. My company has been closed since 28 August, so it’s been an unexpected two-week holiday. I was able to complete a western novel, install a new window A/C unit in my wife’s studio, and continue my bicycling around the area.

By Thursday, much of my stretch of west Houston was all but normal. The water was receding at a glacial pace, but by Thursday, you could see the line of debris along most streets and curbs. I rode to a shopping center on Eldridge, ground zero for the Cajun Navy’s efforts in west Houston, and was able to ride onto the sidewalks directly in front of the stores for the first time in over ten days. A car had emerged from the water since the day previous. Sure, it was a small one, but to think it had literally been underwater for ten days was amazing.

Around behind the center, an open trash dumpster showed the water line. And you don’t have to imagine the smell. It wasn’t pleasant. 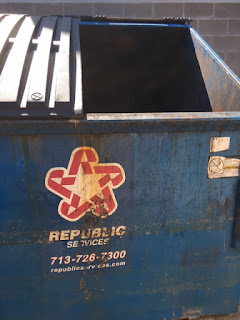 Neither was the line of …stuff floating in this water. That plastic toolkit was floating this way and that. Behind that fence, down Enclave, an alarm bell clanged. I wasn’t sure how long it had been ringing but no one seemed bothered to answer its call. 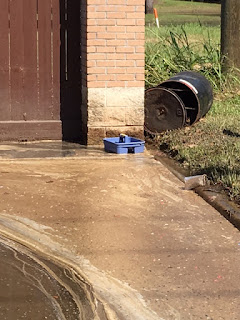 I stuck my phone up to a beauty salon’s front door. The floor looks pretty gross, but the chairs and supplies up on the shelves appeared undamaged. At first I thought there would be salvageable items in there, but after talking to a man who owned a nail salon, he said all the chairs would have to be replaced. Too contaminated. Likely this beauty salon will have a similar fate. 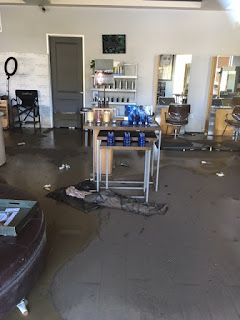 A little way up the street is the St. Basil the Great Greek Orthodox Church. When I got there, they were closed up for the day, but I noted a few things. There was a forklift and platt full of water bottles. Children had taken the time to draw on the sidewalk with chalk. My mind wondered if they were victims of the storm or cheerleaders helping to boost the spirits of the first responders. 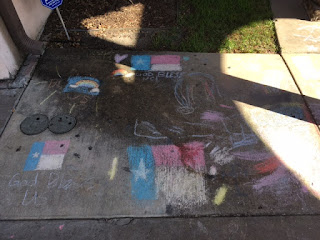 I suspect by Monday, when I join my fellow Houstonians and return to work, most of my daily activities will be all but back to normal. In driving out to Katy yesterday, nearly the entire commute went by without seeing any physical examples of the hurricane. Now, half the commute was along the Barker Reservoir so I knew the other side was still full, but little-to-no damage could be seen. It was a shocking revelation considering I hadn’t had the need to travel far from my neighborhood for over ten days. I expected to see more destruction. I know it’s there; all I’ll have to do is go north once I’m able to drive that way. Highway 6 opened its north/south lanes late yesterday so the commute times should be reduced. When it’s fully clear, I’ll make a trek and see some more of my city and offer assistance.

Speaking of assistance, if there’s one Lesson Learned from this entire experience, it is this:

Form a Social Media group with members of your neighborhood. The information we passed along to each other during the storm was invaluable. It pooled the brains of more than the people in my own house. But as the storm abated and the sun came out, we continued to share information about water conservation, which families were taking food up to the fire and constable and police stations, and any other storm-related news. So, if you don’t already have a social media group—we use Facebook—with your neighbors, make one.

When a storm like Harvey comes ashore, you discover your neighbors aren’t necessarily just the ones living next to your house. You don’t meet a stranger after an event like this. You have to expand your definition of “neighbor” to include your entire subdivision, city, state, and, of course, the nation. We have been blessed with so many people coming to Houston to offer help because the need is here.

And the need is about to be felt in Florida, Georgia, and the Carolinas. As I’ve been following the news about Hurricane Irma, its wind speed, and its sheer size, I’m gobsmacked. That thing is larger than the state! Where the hell do you go? Houston got a mind boggling amount of water dumped on it, but we didn’t get the wind. That’s the one thing that always freaks me out when it comes to hurricanes. So as things get back to the New Normal here in Houston—and we’re not without our own challenges, of which I’ll still write—my thoughts and prayers go to Florida today.
Posted by Scott D. Parker at 1:00 AM