It’s not everyday you get to meet a man who helped open your eyes to a larger world.

About a month or so ago, I was in my local Bedrock City Comics store to see if they had any of the old western pulp magazines featuring Texas Ranger Walt Slade as written by Bradford Scott. They did and I bought one. On the checkout counter was a flyer for something called “The Return of Son on Houston-con.” 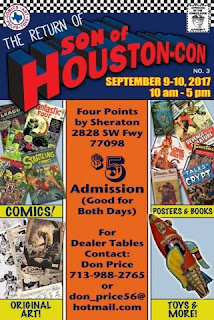 Now, longtime comic readers will note the checkerboard along the top edge
reminiscent of DC Comics from the 1960s. That alone caught my attention and intrigued me. Other than Comicpalooza back in May, all the other comic conventions were cancelled or postponed this year, so I was more than happy to see what this con was about. And for $5 for two days? It was almost like theft.
The other thing that lodged in my brain was the venue. It was a hotel. The first conventions I attended here in Houston back in the late 70s and early 80s were in hotels. Nothing against the way cons have evolved over the decades—with the expansion of what’s on sale to the cosplaying—but there was something cool about a small con. As I walked into the hotel last Saturday, I held hope that the con would be a throwback to the cons of old.

And I was rewarded.

Son of Houston-con was entirely held in two, non-contiguous rooms. One room featured toys. I bypassed that room when I first got there because I want to see the comics. They were there, all in one not-too-large room. Bedrock was there and much to my happiness, owner Richard Evans brought all his pulps! Naturally, I snatched up the remaining Thrilling Western titles featuring the adventures of Walt Slade. (I discovered an interesting story, “The Sun Rises West,” and read it first; here is my take.) I also gravitated to the dollar boxes of another vendor. Slowly, I made my around the entire room, reveling in all the vintage material, including this, a program from Houstoncon ’71. What the cover doesn’t reveal is that Kirk Alyn, the first live-action Superman from the 1940s serials, was the featured guest. 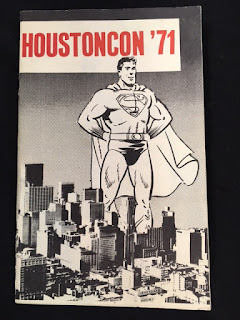 After a walkaround of the toy room—which had an original Six Million Dollar Man 12-inch action figure and the Evel Knievel scramble van—I was just about to leave when a man asked if I had enjoyed myself. I said yes, very much. He wore a name tag so I started asking him questions about the folks who organized the event. Turned out the name on the tag was the same name on the original flyer: Don Price. Very graciously, he told me a bit about the history of the original Houston-con back in the day—he attended that 1971 show; turned out the program was his—and the comic book collecting community here in Houston.

And then he dropped the name Roy.

Immediately my mind reacted. “You don’t mean the guy who owned Roy’s comic shop on Bissonnet?” [Right near Murder by the Book for folks who know where that shop is located.] Price said yes and offered to introduce me to him.

Now, for the younger folks who read these posts, y’all know there is such a thing as a comic book store. Throw in digital and there’s a myriad of ways to get every comic you want. But back in the day (gosh I sound old) the only place to get comics were spinner racks at grocery stores, drug stores, and convenience stores like U-Totem, 7-Eleven, or Stop n Go. And if you missed an issue, especially one with a cliffhanger, well you simply missed an issue.*

My grandfather who lived near Roy’s Memory Shop (that was the official name) would always drive me around to the various convenience stores in his neck of the woods. One day, I saw a shop with spinner racks near the front window. Not only that, his painted sign featured the Human Torch. What must this store be? 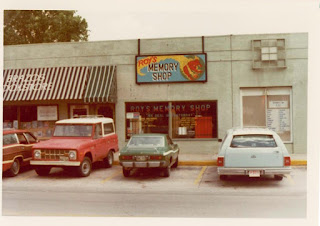 I walked in and it was nirvana. This was a store whose sole purpose was to sell comics and memorabilia. 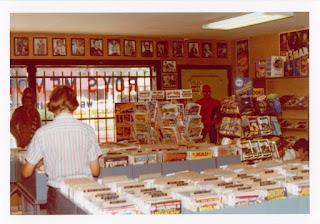 For a kid who devoured comics, this was heaven. Every time I visited my grandfather—probably once a week—he would take me there. It was in Roy’s Memory Shop I learned what day comics were released and was able to ensure I didn’t miss an issue. Once I learned stores like Roy’s Memory Shop existed, I never had to worry about comics again. I found one in Austin when I was in school there, another in Dallas, and again back in Houston with Bedrock City and The Pop Culture Company.

All of that is background and prelude. Mr. Price introduced me to Roy Bonario last week. I am an adult now, but some of my childlike wonder at discovering his store returned when meeting the man himself. I was able to tell him how much his store meant for a young kid like me and thousands of other kids over the years. He began talking about past Houston-cons, the business of collecting, and how much fun he had in talking with fans over the years. It was quite a moment. 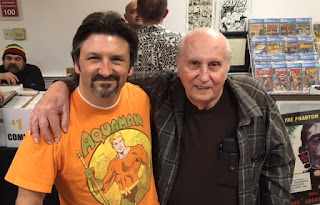 Have y’all ever had a chance to meet your “Roy” and tell them how much what they did meant to you? I’ve had one other moment like this. It was up in Denton, Texas, and I was attending The University of North Texas for grad school. It was an evening class in the history building and we were all hustling to get to our lectures. A man, older than men, was walking in the lobby and his face was instantly recognizable to me. It was George King, my 10th grade world history teacher. He was the one responsible for igniting the fire of history within me. I had the opportunity to remind him who I was (he said he recognized me), why I was there, and that he was the one who flipped on that history switch.


*World’s Finest Comics #246 was one of the comics I bought from a spinner rack at a Stop n Go near my grandfather’s house. The lead Batman/Superman story was a cliffhanger. I scoured all those convenience stores for #247 but never found it. Many years later, guess where I found #247? You don’t really need me to answer that, do I?
Posted by Scott D. Parker at 1:00 AM