Long time Philadelphia resident Tony Knighton has written his first novel, Three Hours Past Midnight.  Set in his home city, the book is fast-paced, no-nonsense crime fiction about a professional thief trying to right a number of wrongs after a heist doesn't go as planned. Has that been done before? Of course. So execution is paramount, and on that score, Tony delivers.  It's a novel that I sped through - a book that starts tense and never lets up.  Tony blends character and action really well and keeps everything plausible.  His main character is capable but not superhuman in any way, and though Tony romanticizes nobody, you can't but help rooting for this career criminal to pull through.  I'm glad I picked it up and after finishing it, I wanted to ask Tony a few things about it.

So here we go: 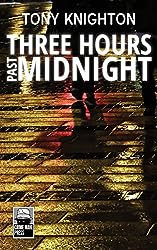 SCOTT ADLERBERG: Three Hours Past Midnight all takes place over a short nocturnal time frame in Philadelphia, a city you know well. That's apparent from your clear and fully felt descriptions of neighborhoods and individual streets. As a reader, you know when a writer knows a place cold, and you obviously do. Did you, as it were, scout out locations for the book, or did you just draw upon your long acquired knowledge of the city when writing? The city is almost a character in the book, it feels like.

TONY KNIGHTON: I wrote about the locations in the story mostly from memory. Some of them are personally significant.

The route the protagonist drives, runs and rides sitting on the train’s back step, all while being pursued, roughly follows my commute to work during the time I was writing the book.

I fought a fire in the real apartment house on Pine Street a few years ago. It turned out that a girlfriend of my wife’s lived there; she got home after the fire.

Other locations I picked more for fun. Over the years, I’ve been to a lot of parties in huge old Victorian homes in Germantown, a neighborhood in the northwest part of town. A while ago, I read Black Friday by David Goodis. In it, his protagonist hides out in a house on Tulpehocken Street. I thought the party in my story should take place on that street as well.

I read in a piece you wrote recently that your main character in the novel, who is never named, appeared in an earlier short story of yours called “Mister Wonderful”. What prompted you to bring him specifically back for more action? And in bringing him back in a novel, how did you expand his character from the short story, if you did?

The short answer to why I brought him back is that I wasn’t finished with him.

That first story saw him injured and on foot, the subject of a manhunt, a hundred miles away from anyone or anything that could help him. It seemed natural to revisit him a few months later, healed and eager to work – eager enough to break a few of his rules.

Three Hours Past Midnight gave me an opportunity to round out his character, not so much by anything he overtly reveals about himself, but through his interactions with other characters in the story, especially those who already know him. I can imagine him and the others he encounters as any other group of people engaged in any other business. Most of these guys have dealt with him first-hand. Their reactions to him are complicated, but they all recognize him as a professional. One or two are even annoyed with him for the fix he finds himself in, but it feels more like a journeyman’s friendly annoyance with another’s mistake.

I also realized things about him that I didn’t reveal in the story. He has a straight job, and I know what it is. I’m keeping that under wraps for now.

So it sounds like you plan on bringing him back. Is that true?

Yes, he’s going back to the Central Pennsylvania location of “Mister Wonderful.” There was a lot of money that was never recovered. He wants it.

The novel is a classic style heist gone wrong story. Are there any books and films in particular that you love in this sub genre and that may have influenced your own take on it?

There are many great books and movies that deal with the “heist gone bad.” Easily my favorites are the Richard Stark books, and some of the film adaptations, Point Blank and Payback (the director’s cut). I also like a few of the films obviously inspired by the Stark books – City of Industry is a well-done rip of The Sour Lemon Score. While more a revenge flick, in The Limey, Terrence Stamp’s character Wilson is clearly modeled after Parker.

I like Reservoir Dogs a lot. I think Ronin is outstanding.

In your non-writing life, as you mentioned, you are a Philadelphia firefighter.   And you’ve been one for many years.  I find that interesting, not just because of the job itself, but also because how that seems like work so geared towards teamwork.  I’d imagine it’s a job where your very life can actually depend on the actions and competence of the people you’re working with. That’s as far from the solitary activity of writing, where you fail or succeed alone basically, as you can get.  Has your time and experience as a firefighter in any way influenced you in how you write or just how you see the world?

That’s a great question, Scott.  The job has clearly shaped the way I see the world, and that has influenced my writing.

Most of us who write fiction have some kind of straight job. I’ve been fortunate to spend most of my life working at something I enjoy.  People who know I write assume that I draw upon events I’ve experienced during my time on the fire department, and I have – I’ve had the opportunity to do and see things that most people in the world never will – but I’ve gotten the most material from knowing and listening to people.

Many of the calls we answer are simply someone with a problem.  We try to make things better for them. There is nothing that someone can tell the operator when he calls 911 that the fire department will not respond to.  Sometimes the dispatch is so nebulous, it feels as though they’re telling us, “We have no idea.  Go take a look.”  Listening to people is key.  A person is never so self-revelatory than when they’re in a panic or in trouble.  Even when they’re lying to you, they’re telling you things about themselves.

The people you work with are the special part of the job.  Work friends quickly become close friends anywhere, but living in close quarters with other men and women who depend on each other is like nothing else.  We’re tight.  I love my brothers and sisters on the job.

Many civilians are under the mistaken impression that the fire department is a macho institution.  It’s not.  It tends to be masculine in nature – function over style – but it’s the least macho bunch I’ve encountered.  Anti-macho.  Most firefighters are self-deprecatory to a fault; members who display cockiness or swagger are quickly cut down to size.  I think that this attitude may have most directly affected my writing style.  I tend towards minimalism.  I try to write in a way that doesn’t call attention to the writing, just the story itself.

Maybe I just don’t want the firefighters talking about me.

When do you usually write?  In the morning, evenings?  And do you tend to plot most stuff out beforehand or wing it? I think your minimalism, as you say you aim towards, comes through effectively, and the writing is very tight.  The sense of someone who cuts everything remotely extraneous comes through. Do you edit as you go or like to just get the first draft out and then go back and do successive drafts, editing that way?

I prefer mornings. I began writing seriously while going through a prolonged bout with insomnia. I needed something that was quiet and felt productive, and writing fit the bill. It had always been something I’d wanted to do, but was too chicken to try. I’m not sure why, now. Later on, I heard Elmore Leonard say that he had written his first book by getting up an hour early and writing two pages every day. It sounded like a good plan.I don’t plot things out ahead of time, but I usually have a framework of sorts – I know certain things are going to happen, and usually in a certain order. That was what made the story “Mister Wonderful” so much fun to write. Rather than any sort of plot or framework, it began for me as a premise – an injured man, trapped in a car that has come to rest upside down in an icy, shallow streambed at dusk. I worked out some of who he was and why he was there, miles away from home or help, as I got him out of the car and through the woods, away from the police. I finished the story but realized that I wasn’t finished with him. I imagined that once he was on the mend, he’d be anxious for work. So then I wrote Three Hours Past Midnight.I edit and revise compulsively. Sometimes I’ll change a sentence immediately after writing it. It takes me a long time to get a first draft together, but by then I’ve gone over it so many times that a lot of it isn’t too horrible. Good writers have told me that I shouldn’t do this. I’ve tried to stop. They say the first step is admitting that you have a problem.

I have the same problem.  So what's next for you then?  The novel that has him going back to Central Pennsylvania or something else before that?

I started a novel a while ago, about a fireman on light duty, activated as an investigator for the duration of a four day city-wide convention.That piece was nearly finished, but sat idle while I worked on other things. I've gone back to work on it, as I also work on the story of the Three Hours guy's return to the Central Pa. scene of the crime (I'll have to come up with something to call this guy, at least while I'm talking about him. He's kind of a pain in the ass).I suppose it all depends on what I finish first.

Whichever it is, I'll be looking forward to it.


You can get Three Hours Past Mightnight right here.