There are plenty of ways to tell a story and there are many storytellers who have talent beyond the written word. For instance, Eryk Pruitt, author of the soon to be released WHAT WE RECKON, is also an award-winning filmmaker. Poet Susie Henry is a talented urban and wildlife photographer. The list of musicians moonlighting as writers is long. S.W. Lauden. Eric Beetner. Joe Clifford. Tom Pitts. Anthony Cowin. Mike Monson.

Continuing to strive for creative storytelling is DJ Alkimist and E.A. Aymar. DJ makes music. E.A. Aymar writes stories. They combine the two mediums, then each finished track is accompanied by a piece of artwork, inspired by the music and story. Music, writing, and visual art equals an immersive storytelling experience! 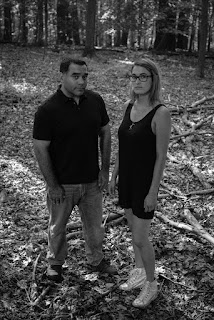 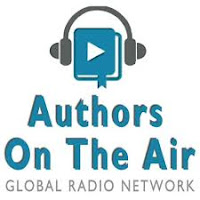 Authors on the Air

⇰"Requiem" is a modern urban-opera that tells the tale of two loyal brothers living life on the streets. The track debuted in November of 2016 on the Authors on the Air radio network. 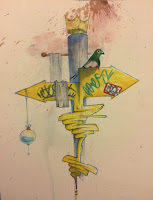 ⇰"Red Room" is the portrait of a woman with a powerful need for acceptance and success. "Red Room" was released in January of this year during Alex Dolenz's Thrill Seekers Radio, also found on the Authors on the Air radio network.

DJ Alkimist has written and produced music for US Soccer, W Hotels, DC’s 107.3, The Washington Nationals, The Smithsonian, The ONE Group, The Washington Ballet, Nike, sweetgreen, Discovery Channel, and Armani just to name a few. An equally talented musician, she has sat first chair viola in dozens of symphonies, orchestras, and chamber groups. She also spins on weekends at many of D.C.'s clubs. With that amount of energy and creative spirit it is no wonder she and creative partner Ed Aymar began working together.

E.A. Aymar, who holds a Masters in Literature, is the author of I’LL SLEEP WHEN YOU’RE DEAD and YOU’RE AS GOOD AS DEAD. He also writes a monthly column for the Washington Independent Review of Books, and is the Managing Editor of The Thrill Begins (for the International Thriller Writers). His short fiction and non-fiction have appeared in a number of top crime fiction publications. Organizer and host of the Washington D.C. Noir at the Bar series, he helped develop similar events in Virginia and Maryland.  Ed tirelessly supports and assists new talent, a writer's best-friend. It's clear Ed has a deep love for good stories.

Together with talented visual-artists, E.A. and DJ create dark narratives, expressed through several mediums, adding depth to the already haunting dramas. Graciously, E.A. and DJ sat down to give us a glimpse inside their drive and process. 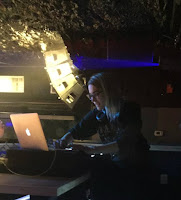 What was the first project you two worked on together?
EA: This all came about because I think readings are usually boring and wanted to add something different to mine. I’d worked with musicians before during readings – they’d sing or play instruments during intervals – but we’d always used jazz standards, and I had a longing to work with original music. Randomly, I'd hired Kim (DJ Alkimist) to do the music at a Noir at the Bar, and we got to talking, and she told me that she makes her own music. She sent me the track for "You Would Have a Queen" and I loved it. The story came easily.


What was the inspiration for that particular endeavor?
DJ:  The music came from the entrance to “The Queen of Sheba,” the subway, and Queens (NY), I suppose.
EA: And as for the story…Kim already had the title (she's a lot better at picking titles than I am) and it had a fairy tale sense to it. The story of girls escaping a giant in the wood came naturally, and its pretty close to what I tend to write about - violence, and the treatment of women by bad men. And there were certain effects in her music (like the soft wails during the "ghost line" at 1:35) that fit naturally. Weird how that happened.


Tell us about your most recent exhibit and the inspiration behind the multi-media presentation.
DJ&EA: The most recent track we've done is called "The March." It's a joint track about people marching through an apocalyptic, ruined Washington, D.C. The music was created around the last election, and we were both moved by the strength and passion in protests at that time. We approached other writers we like and asked them to contribute (Amber Sparks, Tara Campbell, Meg Opperman, and Holly Karapetkova).


We haven't released that track yet because it's going to be on a CD that accompanies Gargoyle Magazines next issue (which is a real honor). But once that CD's out, we'll put it on blast.


We work with different artists to come up with artwork for all the tracks we produce, and the accompanying artwork was done by an artist named Angela Del Vecchio. Among other things, she designs all the fantastic D.C. Noir at the Bar posters. You can check out a sampling of her work at: http://angeladelvecchio.com.


What are some of your other artistic outlets? What mediums to you enjoy working?
DJ: Besides music? Well, I like to write poetry and I also enjoy drawing/painting/coloring, but I wouldn't say I'm any good at it.
EA: I can't do anything outside of writing.


How do you find time for all of your endeavors?
DJ:  Haha, good question. Lots of energy courtesy of a plant-based diet…
EA: Ugh.
DJ: …combined with insomnia. Also, I just make time! I've put a lot of energy into creating a life for myself where I can be creative in between the hustle. And magic, of course.
EA: I do a lot outside of my own writing and, given that, I've met people who know I’m in the writing community, but have no idea that I write. That's the most important part of my identity, and I want to make sure people are aware of it. In the wait between novels coming out (my agent and I are on submission right now), this project helps me remind everyone that, yeah, don't forget I'm a writer first.


What is your current project?
EA: We're working on a joint track with Meg Opperman, who worked with us on "The March" and is a wonderful, award-winning short story writer. If we keep the same idea that we had, then this is going to be more of a collaboration than "The March," because she and I will be alternating verses, almost like trading eights. We have a really cool artist set to design the artwork, and the music is one of my favorite pieces Kim has put together. I'm hoping that it'll be out in late September. Ideally, "The March" in August, and this new track in September. And we're going to do a live performance of "The March" at Gargoyle Magazine's anniversary party on September 13.
DJ: And I'm actually in the process of releasing my first album! Most of it is done and I'm just in the finalization stages now. I'm hoping to release it on Spotify in a few months so keep on the lookout.
EA: I’ve heard some sneak peaks from the album and it’s really good. Your ears are going to thank you.


When should we expect to see the new newsletter?
EA: We worry about bugging people with a frequent newsletter, so we only send it out when we have news: a new track, performance, or something else noteworthy. I'm a big believer in not being annoying (shut up, everyone I know).

Posted by Marietta Miles at 8:01 AM

Thanks for having me and Kim here, Marietta and DSD! I love your work, despite the involvement of Weddle.