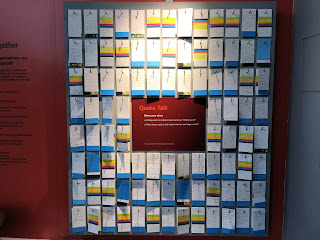 By Claire Booth
Last weekend, I went to the California Academy of Sciences in San Francisco, which is a fabulous place with a little bit of everything. A rain forest, an aquarium, a planetarium, and a swamp with an albino alligator (more on him later).
This time, there was also an exhibit about earthquakes. We are, after all, in California. There were the standard displays about plate tectonics and fault lines. And there was a room that quaked. It rattled with the strength of the 6.9 Loma Prieta earthquake, which stopped the World Series and collapsed portions of the Bay Bridge in 1989. And then it got serious and walloped us with the 1906 quake, which famously devastated the entire city and is estimated to have been a magnitude 7.9.
But what really shook me was the wall outside that room. On little pieces of paper were the stories. Big stories. Little stories. Life-changing moments. Written by people who’d been caught in earthquakes. From all over the world. 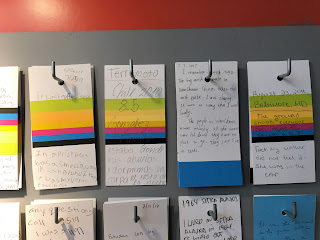 Sitka, Alaska, 1964. Magnitude 9.2
Chile, 2010. Magnitude 8.8
Mexico City, Mexico, 1985. Magnitude 8.0
Edmond, Oklahoma, 2016. Magnitude 5.6
New Zealand, 2001. Magnitude 6.2 or 7.1
How their fish tanks sloshed around, or the bed trembled, or they thought at first that a sibling was playing a trick on them. How they hid under tables, or fled into the street, or continue to have nightmares.
I don’t know how long I stood there, reading. I do know that I didn’t want to stop. This is what made it real. The stories. And how little details knit together to form a big picture that you wouldn’t be able to see otherwise.
I could almost feel the gratitude – that someone had bothered to ask, had recognized individual experiences as significant. And the wall reinforced that importance for me. Stories, whether fact or fiction, are integral to the human experience and our understanding of the world around us. So please share yours. Whether it’s in book form, or simply on a scrap of paper dangling from a hook. Because they’re all important.