"Violent, topical and funny as hell. Blacky Jaguar is my kinda guy, and Colón is one of the best new voices in crime." --Jay Stringer, author of How To Kill Friends and Implicate People 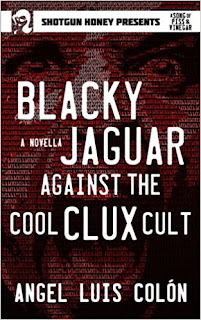 Angel Luis Colón is the Anthony and Derringer Award-nominated author of NO HAPPY ENDINGS, the BLACKY JAGUAR series of novellas, and the upcoming short story anthology; MEAT CITY ON FIRE (AND OTHER ASSORTED DEBACLES). His fiction has appeared in multiple web and print publications including Thuglit, Literary Orphans, and Great Jones Street.


In this, the second installment of the Blacky Jaguar series, everyone’s favorite Doc Marten-wearing, ex-IRA human-bomb is running from the heat and gunning for Graceland. Before he can soak in the splendor of the King’s palace and final resting spot he makes a pit-stop in Nillings, Tennessee to pay a debt to sometime friend and sometime enemy, disgraced former FBI agent Broderick Kimbo. Once in town Blacky finds himself in the middle of trouble.


Though Blacky is gruff, often driven by his anger and given to violence, he has a clear eye for justice that is disarming and it’s hard not to appreciate his backbone. Angel balances Jaguar’s bigger than life emotions and reactions with subtle, humanizing tidbits, making him familiar. He has depth and shows so many interesting sides, this character is a true original.


Blacky is not the only interesting personality to be found in the pages of the COOL CLUX CULT, however. Erica, a typical young woman thrust to the forefront of a dangerous social power play, rises as a strong and brave character who manages to touch and move even the battle hardened Blacky Jaguar. Jaguar’s long-time hacker buddy, Tony, is also one to keep your eye one. Genuine and funny, he supplies his own brand of excitement.


This story will bring to mind images of a community divided, images that spring from the pages of newspapers and the talking-heads on television news, but it is not done with a heavy hand. Angel does not preach. He tells a story and he tells it well.


COOL CLUX CULT is fast and riveting, paced perfectly for those who love a good crime story, but there is also a mystery to be solved. Nillings is a powder keg of hate just waiting to explode and someone is methodically stoking the glowing embers, setting a plan for violence and destruction. Blacky’s fight to find the attacker before they can strike big keeps the story moving at a terrific stride.


FINAL THOUGHTS: Grab a chilly beverage, acquire both Blacky Jaguar novellas, kick back on a breeze swept porch and enjoy. 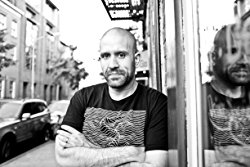 "I sure as Hell hope Angel has more in store for Blacky Jaguar, because this character has more fight in him than can be contained in a single novella." --Bracken MacLeod, author of Stranded and 13 Views of Suicide Woods


Keep up with Angel Colon on Twitter via @GoshDarnMyLife.
Posted by Marietta Miles at 7:20 AM