A Guide to a Guide for the Undehemorrhoided

Ya like Charles Willeford?
One of the great writers. Characters so strange and so alive.
Whether you first read Hoke Moseley in Miami Blues or saw Warren Oates's silent performance as the eponymous Cockfighter in Monte Hellman's adaptation and hunted down the book, Willeford is like none other. He's written books on art dealing, Florida crime novels like none other, memoirs of wartime, and yes, a book about cockfighting. I never met Mr Willeford, but I love reading his stories, as delightfully twisted as they are, because they never wink at the reader or themselves. They're played as straight as they come, and therein lies their magic. If you want to read a fine article by someone who has met Mr Willeford, I point you to this piece in Mystery Scene Magazine by Lawrence Block. I have met LB, and he's a sly character himself. But Charles Willeford left him wondering. Wondering if the man had eaten a cat. You can read the rest in the above article, which sent me on a wild goose chase for another book it mentions, which is the source of this post's title.

A little-known self-published pamphlet by Charles Willeford entitled A Guide for the Undehemhorroided. 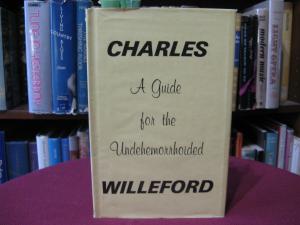 Now, I like writers who invent words. Shakespeare invented hundreds if not thousands. Undehemorrhoided evokes many images, most unwelcome. For one, it assumes you are hemorrhoided, a fate I would wish on my worst and best enemies, but not on anyone I gave a tinker's damn about. There's a reason that you call a relentless pest a hemorrhoid. Because the little SOB's don't quit. But enough about them, let's go back to the word undehemorrhoided. If you're hemorrhoided, you would love to be undehemhorroided. You remember the days when you were prehemorhoidded as a paradisaical time when life was lovely and sadness never lingered and unicorns might peek their velvety alabaster snouts from the nearest copse of woods before springing away, leaving you only a memory. Days when you did not dread that daily constitutional, when you did not eye the revolting bristles of the toilet brush and consider for just the most fleeting of moments, ramming said device where sunlight fears to tread, and giving those little distended blood vessels a thrashing, even if you would shriek in agony and require weeks of bed rest with your tuchis suspended in the air to recover. They are that bad.

Not that I would know anything about it. Research. This is all from research I have done, while looking for this rarest of Willeford tomes. Honest!

The book was written as a warning to all the hemhorroided to remain so. Because, as Oscar Wilde might have certainly said, the only thing worse than being hemorrhoided is to be undehemorrhoided. According to Willeford, the procedure, or at least the recovery, is so uncomfortable that like a bullet lodged next to an artery, it's better to live with this painful invader than to deport it from one's body. This is from a soldier. Not just any, but a veteran of the Battle of the Bulge, who received the Silver Star, the Bronze Star, and the Purple Heart! This man was saying, "wear those painful, itchy, sonofabitching purple welts in your holiest of holies like a badge of honor. Leave them BE."

If that's not more terrifying than a dozen Stephen King novels, I don't know what is. Now, I have not read A Guide for the Undehemorrhoided in its entirety, as the least expensive copy I can find runs for $250, and it's a mere 50 pages, and that's a lot of beer and cat food. The most I've read is the excerpt from the LB article, which I won't reproduce here. You're welcome to bop over to Mystery Scene and read it.

The day this is published, I will be in the hospital for a different procedure, nothing life-threatening, but thanks for your concern. I will not be undehemorrhoided, but hopefully the doc will show me boring images that could be mistaken for vacation photos on a caving exhibition where neither stalactites or stalagmites were encountered.

When I get home, I'm buying myself a copy of the book as a present...
Posted by Thomas Pluck at 1:00 AM

These pipes are clean!

Glad to hear it!