Tom Pitts is a fellow crime writer I consider a friend and mentor, so when given the chance to talk shop about his new novel, American Static, I was eager to jump in. The book isn't out until the end of the month, but anyone familiar with Tom's writing is excited for this one. (Preorder here) We talk about cynicism in politics, Google Maps, and writing in bathrooms among other things. 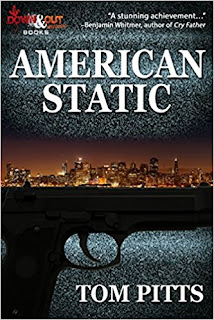 1) A lot of your writing seems to come from your own experiences and interests - I know Hustle drew on your time living rough, and your love of baseball is ever present in Knuckleball - so what was the way in for American Static? Is there anything particular you’re drawing on this time or is this unchartered territory?What I drew from my own life was the city itself. The methadone clinic (which was torn down while I waited for the book to be published, by the way), the donut shop, the secret spot in Golden Gate Park, etc. The city is very much a part of me and I hope it shows in the work.

Truth is, we don’t have any choice but to draw on our own experience as writers. Even if you’re writing sci-fi, you still mine the people you’ve met and the conflicts you’ve battled to build your story. Now that I think about it, we even do the same as readers. How we relate, hate, sympathize, or empathize with a character has a lot to do with our collected experiences in life. That’s why some of us root for the bad guys too.

2) A hardcore knowledge of setting defines a lot of your longer work - reading Hustle made me feel like I knew the neighborhoods. American Static takes us through San Francisco, Oakland, and Wine Country - did you find it more difficult to balance a map-like handle of the setting while still getting those great descriptions in? And do you feel like a hardcore handle on setting is necessary to your work, or do you take some creative license to make scenes work?I do think it’s necessary. I’m definitely one of those guys who crosschecks the internet while I read a book. Not for accuracy but for feeling. When I read Nic Pizzolatto’s Galveston, I wanted to see the coastline he was talking about. Same as some of the desert in No Country for Old Men. It’s not that I can’t envision it from the descriptions, but I want to be immersed. I want the scenery to wash over me. The internet is a gift, use it.

Highway 101 and its tiny towns I knew well from the road to Humboldt and back, but I will admit I’ve never been to Calistoga. There’s a pretty big chunk of the book that happens there. Did I lean on google maps? You bet I did. Doesn’t it have to be perfect? No, the story still dictates what’s needed. As the author, you can move mountains if the story calls for it.

3) Government scandal seems like a really appropriate topic right now, but I know writing a book takes a lot longer than an election cycle (most of the time). When we’re talking about cops, ex-cops, and City Hall scandals how much cynicism and distrust comes from the needs of the story and how much comes straight from your gut?
Are you asking me if Mayor Wong in American Static is based on San Francisco’s own Mayor Ed Lee? No. As much as Lee decimated the city, the mayor in the book was entirely fictional. As for the ex-cop Tremblay, good God I hope there’s no one out there like him. What a monster. It was a blast living in his bitter head. I don’t think I’m that much of a cynic politically. I think a lot of what people view as corruption and conspiracy happens organically.  Sometimes politicians don’t have an evil agenda and they believe what they’re doing is the right thing. They just happen to be wrong. Unfortunately the end result is often the same. Okay, maybe that is a bit cynical.

4) I like to write about how music plays into the writing process here, so I have to ask - did American Static have a soundtrack?
No! I must have silence while I work. I know I sent you a picture of the crowded bathroom I used to write in. My present spot is even worse. I write in the hallway of our tiny one bedroom apartment. I can be seen sitting there with wads of toilet paper sticking out of my ears. I’ve even tried white noise, rain sounds, you name it. So I guess you could say the soundtrack was barking dogs, heavy footfalls from the apartment above, and strained TV sounds drifting down the hall.

5) I know American Static hasn’t been released just yet, and all of your anxious readers are waiting for it - but what’s next? Do you have a new project already started?
I completed a novel called Coldwater after American Static. It’s set in Sacramento but ends in Malibu. And the behemoth I just finished is called 101. It’s my opus to the marijuana trade that completes my quartet of California crime novels. It’s chocked full of bizarre and twisted characters. It takes my plan, my style, my thing, whatever it is I’m trying to do, to the furthest extreme. I don’t believe in sticking with one PoV. I’m trying to create a cinematic experience for the reader. I’ve never been a first person kind of a guy. I like to explore several points of view. Like in film, the perspective will jump character to character, setting to setting. I think a lot of simultaneous action and quick cuts build tension across the board. It drives some of my editors crazy, but I think the reader can roll with the pacing.