A Sense of Wonder


Cheesy is one of the words banned in my world. I’m tired of sincerity being something we have to be afraid of doing. It’s been like that for 20 years, that the entertainment and art world has shied away from sincerity, real sincerity, because they feel they have to wink at the audience because that’s what the kids like. We have to do the real stories now. The world is in crisis.

I wanted to tell a story about a hero who believes in love, who is filled with love, who believes in change and the betterment of mankind. I believe in it. It’s terrible when it makes so many artists afraid to be sincere and truthful and emotional, and relegates them to the too-cool-for-school department. Art is supposed to bring beauty to the world.

-Patty Jenkins, director of Wonder Woman and Monster, in interview.

I saw Wonder Woman last week, and it was the most refreshing action film I've seen in a very long time. It has been compared to "Captain America meets Thor" but it's really its own beast, thanks to its director, who as you can read in the above quote, was unafraid to embrace sincerity. Not once does the story "wink" at the audience. The setting on a mythical island of Amazons and during The Great War certainly helps; to keep verisimilitude, the characters can't be too "cool" like we expect today. Irony and sarcasm weren't common traits at the time. Now, I won't judge the film as a period drama, but as a pulp tale it holds up just fine, and I'm looking forward to seeing it again with my wife tomorrow night. I wish my niece was older, but the violence, bloodless as it is, would be too much (she's 4). 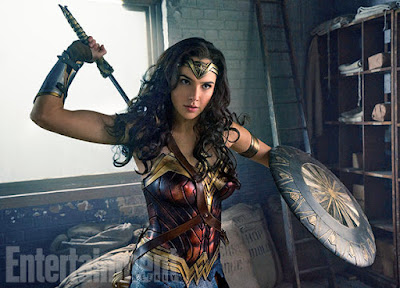 I won't spoil the story, but if you've read Greg Rucka's Wonder Woman: Year One, there are similarities except for the modern day setting. The heart is the same. She is born on an isle untouched by war, where Amazons train to fight war. She is a fighter, but war is her sworn enemy, and she does not have the hang-ups and limited thinking of us in the rest of the world. She is a hero, and not only lassos, slashes, kicks and sweeps her way through battle, but inspires heroism in others by showing what you can do with the power of your convictions (and a little help from your Olympian friends).

"That scene," in the horrific trenches of the first World War, is the most memorable. It has strong emotional stakes. It is not there as a set piece, to show off her moves, or to revel in the horrors of war. She defies her comrades' despair and does what needs to be done. It reminded me of one of my favorite scenes from Band of Brothers, when  Lt. Speirs runs into a village taken by the enemy under rifle fire to pass a message to men pinned down behind cover. And then he comes running back to his men. Like he thought he was bulletproof. 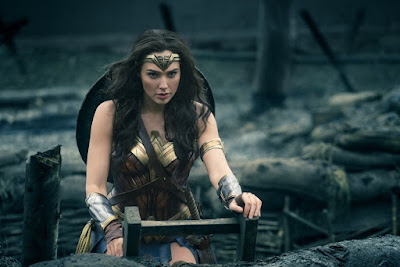 Diana has seen what bullets can do. But like Speirs, she charges in anyway. Because she refuses to do nothing. It is a very moving scene, and I'm not alone in believing so. She turns the tide of the battle and later, sees the true horrors of the war as her enemy strikes back. She sees the lack of all honor on both sides: one who uses chemical weapons on civilians with impunity, and the other sends men to charge to their deaths from the comfort of the war room. She refuses to be part of such a world. That is what heroes do.

In Avengers and the Captain America movies, and the old Superman movies, they are called "boy scouts" for sticking to principles we have long cast aside as "inconvenient" or "unrealistic." We have bought into the cynicism that leaders want us to, to not hold anyone to a standard, as they are "only human." As if we should never aspire to do better than accepting fear, venality, and corruption. Even if all our heroes eventually are shown to have feet of clay, if we hold those feet to the fire, they will harden over time. If that's "cheesy," maybe this story isn't for you. Wonder Woman has always been more than human.

And under Jenkins's camera, she and her island of Amazons are never eye candy. The camera never pans over their bodies like a platter of delights in a restaurant commercial. I grew up watching Lynda Carter play Wonder Woman in her very revealing outfit, and I won't deny that it was part of the appeal. But Carter sold the role that she wasn't just a cheerleader, she was more than an equal. Gadot sells it as well. Her Diana is new to the world of war and corruption, but she is no naif. She holds us to her society's principles of honor and responsibility, and Jenkins never portrays her or the Amazons as women playing at war. They charge into battle and hold to their rules. They never question their validity, in the face of "dishonorable weapons" and tactics. So filming them with utter sincerity was necessary to sell the story to the viewer, and it worked.

That isn't to say that Gal Gadot's beauty was never remarked upon, or that she isn't forced to maneuver around the rules of a pre-suffrage world, where her presence in a war room is an affront, speaking to men of power as equals is an outrage, and her armor would get her mistaken as a prostitute. She has to hide her identity until she is on the battlefield, and then once we see what she can do, her skirt and breastplate aren't sexy outfit, they are armor that represent her actions.

I haven't mentioned Chris Pine's Steve Trevor, spy and soldier, but he is an important ally. He knows from the start that she is extraordinary, but remains shackled to the beliefs of his world until that pivotal scene I mention above. She shows him that these rules exist because we allow them to. And he has lessons to teach Diana of his own. Their interaction is strong and never cliche or predictable, because his convictions are as strong as hers, and they admire each other for it. He isn't a mirror or spoof of the female love interest/sidekick we see, who exists to support our protagonist. He has his own story, his own goals. It's not a perfect film; some parts needed more (Themyscira) and others less (London) but it's the best superhero movie I've seen in a very long time, one that captures the spirit of the character without twisting it to fit our own cultural mores. Superman showed us that a man could fly, Spider-Man and Iron Man showed us comic book stories could make us laugh without being silly, The Dark Knight and Watchmen showed us that serious questions could be asked in a superhero story... and Wonder Woman does it all.

Maybe not backwards, but in heels.

Excellent points, all. And I'm with you re: what this movie gets right. It is such a breath of fresh air for a DCEU movie. I, too, would have like more Themyscira. I have more to say, but I said it here: http://scottdparker.blogspot.com/2017/06/wonder-woman-movie-review.html

Yes, we needed more Themyscira and a little less London, even though Etta was great.