“I want to make beautiful things, even if nobody cares." -Saul Bass

The great Megan Abbott shared that quote on the famous designer's birthday. If you don't know who Saul Bass is, you've hopefully seen many of his film credit sequences, which are brilliant and iconic: 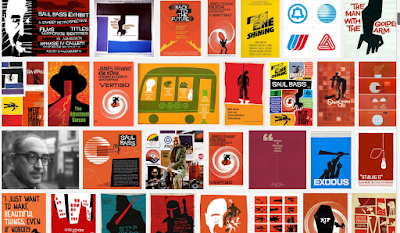 I'm not here to talk about those gorgeous, minimalist poster designs, but his words. Would you still write, if no one read your work?

We know of writers whose fame only came after death. Herman Melville, Emily Dickinson, John Kennedy Toole, Stieg Larsson, Franz Kafka. They tried to be published. Some had little success, but they kept writing. Larsson wrote his entire sprawling trilogy before he sought publication. It was obviously a story he wanted to write. Others wrote one work and let its rejection consume them, like Toole, whose masterpiece A Confederacy of Dunces, one of my favorite books, was only published after his suicide, when his mother soldiered on.

It's upsetting to contemplate, because readers encourage the writer. We shout into the void and even if only a few kindred spirits respond, we know we are not alone. Writing can be a lonely process. I don't write in a coffee shop. I used to walk to my library and sit near the cafe with headphones in, to avoid the temptations of television and cat juggling, but now I seek the solitude of my writing nook to retreat into my inner world. It energizes me to create more, when I hear back from readers, but I know I would write whether other people read my stories or not. Because I used to write in journals long before I sent stories to editors for consideration. I told stories to my sister. I daydreamed to myself, whenever I got a case of the what-ifs? and thought of what might have been, what could be, or what I wish I'd done.

Two weeks ago I mentioned writing fearlessly, and this ties into it. If you would keep writing if no one read your stories, you can write without fear. You do not concern yourself about whether "they" will like it. You trust in yourself as a reader, and a writer. It's not to say what comes out of your pen or keyboard will be treasure, or go unedited, if you choose to share it with the world. You can burn that bridge when you come to it. And you'll come to it with a work that is uniquely yours, that you did not workshop with your own doubts and inner censors. That's what first readers and editors are for.

So to borrow another platitude, write like nobody's reading. (and ignore the snarky inner self's answer to that: "they won't!) Trust your voice, and write with daring. Trust your beta readers. Choose them wisely.

Here's another quote for you:

“The first draft is just you telling yourself the story.” ―Terry Pratchett

Don't forget that you are the first of your first readers. Write for yourself first, clean up later.