Who Cares About the Motive?

Some time ago, I read an article (I don't even recall where) that talked about the question of motive in contemporary crime fiction.  We all know the familiar adage: means, motive and opportunity are needed to prove guilt in a criminal trial, and a mystery writer plotting out a story or novel must supply all three for the narrative's  murderer. For a killing to occur, real or fictional, the culprit has to have the tools to commit the crime (the weapon), a reason strong enough to take another person's life, and an unhindered chance to put into action the intent to kill. In countless mystery stories and novels, one or more killings occur, and the detective proceeds to investigate by sniffing out clues that will lead to knowledge about these three things. As the investigator checks out suspects, he or she eliminates those who may fit the profile for one or two of these points, but not all three. The person who matches up to all three, of course, is the killer. But the article I read asked how accurate this picture is in today's world of forensics. Do police, when investigating a murder, really care all that much about the motive? To the contemporary police, the weapon used remains important (as a way to link the suspected killer to the crime) and the relevance of opportunity will never go away unless one day people are able to be in two places at the same time. But what's the big deal about motive?

If a married woman is killed, for example, then, yes, the first person the police will look at is the husband (statistics dictate this approach). But even in a case like this, what really do the police need to know: why the husband wanted his wife dead, or whether any blood, skin, bodily fluids, etc. provide a DNA match with the husband? If the police find that the blood spatter at the crime scene contains the husband's DNA and nobody else's (and assuming there's no other reason for his blood to be there), they have their murderer. Case pretty much closed, based on forensics. Whether the husband killed his wife for her money, in a jealous rage, because he has a lover he wants to be with, or for any other reason is of secondary importance. Finding out the why serves as nothing more than icing on the cake. 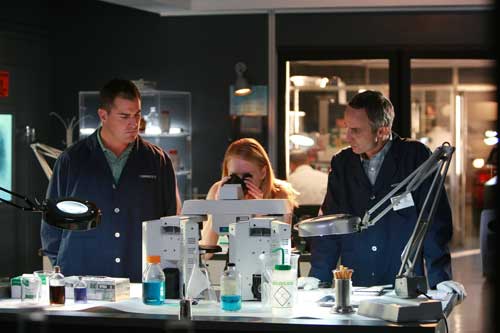 This is the way nearly every episode of CSI and its offshoots (and its many TV show descendants) proceed. The standard forensics team is all about science, following the evidence, and whatever motive they give the viewer comes at the end. There are CSI episodes, for example, and good ones, where the team never gets to the bottom of understanding the killer's motive. But it doesn't matter. They know without doubt they have the right person based on the physical evidence. And, as this article I read noted (and with which I agreed), there is something about this development in investigative technique that seems to make the mystery writer's job harder. Like in real life, a crime on the page can occur where no physical evidence is left behind, and there as always finding a motive to link a specific person to the victim remains of major importance. But with forensics teams able to use tiny fibers of hair as decisive evidence nowadays, it's less and less common that no physical evidence is left at crime scenes. So the crime writer faces a choice: keep concocting mysteries where physical evidence plays no part or (not quite plausibly) a minor part, or write mysteries whose solutions hinge in large part on forensics.

The problem here is that not everyone writing wants to present the minutiae of forensics. CSI may have been a superb show, but I have a hunch that most writers would rather watch that kind of mystery than write one like it.  Most writers, I suspect, are more interested in people — psychology and motive — than in CSI-type science.  To avoid this dilemma, one can always write crime stories from the criminal's point of view,  and here motive and psychology remain paramount. Ditto for whydunnits, where the emphasis is not on who committed the crime but on why the perpetrator did what he or she did. Maybe that's why, over time, whydunnits have become more and more popular. With investigative science central to solving crimes, the whydunnit gives writers a way to explore human motivation without having to make the science a centerpiece. But for those still writing whodunnits of any kind, the challenge is there. How much do you focus on your killer's motive, and if you do, how do you do it while trying to create a world the reader believes?

I don't even write whodunnits (Or, anyway, I haven't written one yet.  In the future, who knows?), but as a crime fiction fan I find the question worth thinking about.  Funny, science is under attack in the real world, at least in certain quarters, but in mystery fiction, it gets more and more important all the time.

I want the science to be realistic, but I read for the characters, which means that if you can't give me a convincing motive, I consider the book a failure. That's not to say the motive has to be reasonable TO ME, you just have to convince me that the motive is reasonable TO THE VILLAIN. For example, I would probably not kill someone and eat his liver, but if your villain has always been susceptible to quack medical theories and he has some terrible illness, he might find the murder totally reasonable.

Agree entirely, Laura. I read for the characters also, and I want to know what makes the criminal tick. But the science aspect is just one more part of the equation the writer probably has to consider if the writer's trying to make the investigation a plausible one in today's world.

The reader cares about the motive. (At least readers like us do.) The fictional cops might not. Paraphrasing Sherlock Holmes, when one has eliminated the impossible, whatever remains must be the truth, however improbable. It doesn't matter why. If only one person could have done it--physically impossible for anyone else--he done it. Case closed.

The prosecution has a higher barrier, as they much convince a jury. That's almost certainly going to involve a "why?"

“The crime scene provides the greater share of physical evidence, the first part of a detective’s Holy Trinity, which states that three things solve crimes:

Without one of the first two elements, there is little chance that a detective will find a suspect capable of providing the third. A murder investigation, after all, is an endeavor limited by the very fact that the victim - unlike those who are robbed, raped or seriously assaulted - is no longer in a position to provide much information.

The detective’s trinity ignores motivation, which matters little to most investigations. The best work of Dashiell Hammett and Agatha Christie argues that to track a murderer, the motive must first be established; in Baltimore, if not on the Orient Express, a known motive can be interesting, even helpful, yet it is often beside the point. Fuck the why, a detective will tell you; find out the how, and nine times out of ten it’ll give you the who.” -- David Simon, Homicide: A Year on the Killing Streets

Well now. This must be an excellent example of an idea that soaks so well into someone's head they assume everyone knows it. I've read HOMICIDE at least three times, so I know this, but I didn't for a second think where I got it. I suspected I wasn't smart enough to have thought it up[ on my own, but thanks for the reminder.

I've been pondering another re-read. Now I'm going to actually put it on the shelf.