I’ve been binging a show that I never in a million years thought I would watch. Because it’s about two seventy-something women. Which is, um, not me. By almost two generations. So when I saw the Netflix ads for Grace and Frankie, I ignored them. I watch things like Justified, and Luther, and Sherlock. Then a wiser – and not much older than me – friend sat me down one weekend and forced me to watch. After fifteen minutes, I was hooked. 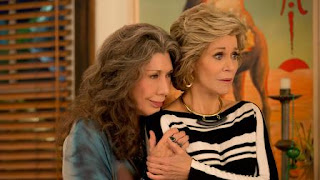 Grace and Frankie (Jane Fonda and Lily Tomlin) are married to law partners. In the pilot, the husbands (Martin Sheen and Sam Waterston) finally decide to tell their wives that they’re gay and have been having a love affair with each other for decades. Divorces ensue and the two women are forced to move into their jointly owned beach house together, where they become wacky roommates.
Yes, I know. I can hear people right now saying the same thing I did originally. “No, thanks.” But the show’s full of surprises. It’s profane, soaked in booze and pot, and occasionally slapstick. It can be poignant and unkind, which is exactly what you’d expect of people in that situation. It also features the main characters’ adult children, who are struggling to adjust after the earthquake their fathers have caused in their lives. 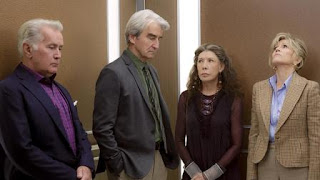 
But what really makes it something I ended up binging? The writing. Granted, that wouldn’t matter if the acting was subpar, which it most certainly is not. But it’s the writing that makes this comedy/drama something that most anyone can relate to (unless you’ve never gotten screwed, or heartbroken, or hated someone you love, or medicated away your sorrows with questionable substances). And that is what masterful writing does. It takes one experience and makes it universally relatable.
And that’s why I gave my friend a sheepish apology. She was right. When you step off your own well-trod path, you might find something fantastic. So whether you’re watching, reading, or listening, give something new a try this week. I’d love to hear about it. And if you can’t think of anything, may I suggest Grace and Frankie? You’ve got three weeks to catch up. The new season starts streaming March 24 on Netflix.

I like all four performances so much that I also stuck with it and look forward to its return. I especially think Sam is brilliant. So soulful.

Pattinase, I agree! And it's so fun to see him play such a different character from the one on Law and Order!

I haven't watched, but this is the second review and recommendation I've read that is making me consider it. And I loved Sam Waterston and Jane Fonda together on the Newsroom.

We tried this and gave up after the first episode. Just could not get into it.

I love this show so much. Thanks for writing about it!