The Distraction of Reality

It will come as no surprise to anyone who knows me that I'm a fan of the Fargo TV series. There are few crime series that I think rival The Wire as best ever, and Fargo is a contender for the crown. The first two seasons of Fargo have been exceptionally tight, for viewers like myself, who love a series with a long overriding arc and strong characters, Fargo is top shelf.

We've recently been re-watching Fargo in preparation for the upcoming third season. It isn't necessary. Each season is a standalone season, with a different story. Most of the characters are different, and in the case of season 2, the few returning characters are much younger than they were in season one, and you're delving into a part of their history that informed them in season 1.

The real reason for the re-watch is simple. This is a great show that holds up to repeat viewing. As I told Brian yesterday, I think it's more enjoyable the second time around because there are so many things you pick up on that make more sense or have relevance that you may have missed in the first viewing. The attention to detail is phenomenal, and it's just that layered. 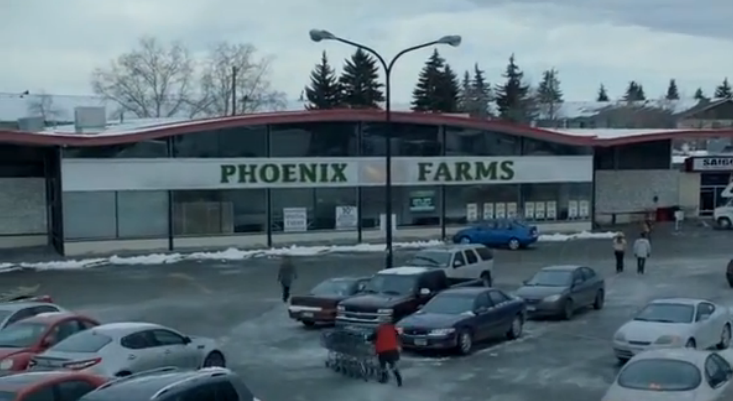 The actual grocery store used? My grocery store, from when I was in college. I lived about a block and a half from it.

This weekend I learned that the third season, again filmed in Calgary and the surrounding area, would venture even closer to home for me.

Parts of the show have been filmed in Beiseker, where my ex and I owned a house and lived for several years. And another filing location is the Beiseker library... A place that I worked at. Other locations included Bragg Creek, where North of 60 was filmed. Personally, I'm really excited to see familiar sites and how they play out on the small screen. However, I also realize that this season will cut the closest to home. There may be flashes of stores I shopped in dozens of times, as well as restaurants I ate in. And part of the backdrop will be a place I worked in for a period of time.


While I don't think that will detract from my enjoyment of the show at all, I'm aware that when things cut close to home for some people it can be very distracting. How many cop shows follow police procedure to the letter? How many police procedures follow every detail precisely? They don't. Reality is almost always filtered to accommodate the needs of fiction.

The balancing act that writers must contend with is weighing the needs of the story versus the credibility of the content. When you can get a reader or viewer to completely embrace your work and dispense disbelief, or buy into your fiction, then you can successfully tell your story.

The setting may inform the story. There are things about specific places that, if gotten wrong, may make a local cringe or even abandon a story. I think as a Canadian, I'm accustomed to the distortion of Canada in story. One of my favorite slips was a reference to a town named Muskoka, when Muskoka is a district and not a town. Others might ignore than, but when you grew up in a town in Muskoka you can't deny they didn't do their homework. Did I stop watching the show? No. Canada is used as a fictional film backdrop for so many American shows it's just become something I think we overlook. Fargo isn't the first series to feature filming in Calgary or the surrounding area, and it won't be the last.

However, there is something distinct about how they've utilized their settings and created their world. It really works as a whole. I think Ewan McGregor said it best when he talked abut filming in the brutal cold winter this year. "I quite like it. I think when it gets really down to the minus 20s, I’m like ‘This is the real deal.’ This is what it’s meant to feel like. This is what it should feel like.”

The authenticity of the experience informs the art. How many of you have had that moment, when something in the fiction spoke to you as being so real that you connected with it deeply? I had that reading Laura Lippman's To The Power of Three, because the description related to the foot injury was so real that I - as a person who had their foot partially severed as a child - knew Laura must have suffered a foot injury she drew inspiration from, which she confirmed in an interview I did with her over ten years ago. Or when I read the opening of The Murder Exchange, and knew - as someone who almost drowned as a child (I was a nightmare kid, okay?) - that the author must have had an experience where they thought they could die.


When a setting I know is utilized in a way that creates a new setting, that makes it really become the fictional universe, it enriches the story. Done wrong, it can be a black mark. It's easier to do this in film than it is in books, but if you feel daunted by writing about a setting that you haven't visited or lived in, consider this: most people determine whether a work feels authentic to a location based on their perception of the location, rather than their experience with it. Sometimes, being believable is more important than reality... And if you're really stuck, there are usually community associations where you might be able to get in touch with someone who is more than happy to answer your questions and help you create an accurate representation of their world.

Back to Fargo, I'm going to put this challenge out there. If you haven't experienced Lorne Malvo messing with the minds of those around him for his own amusement, if you haven't watched Mr. Wrench and Mr. Numbers in action, if you haven't experienced Mike Milligan and the Kitchen brothers, if you haven't watched at least one season start to finish and weighed it as a whole, then you cannot argue that there's a better crime fiction show currently on television. This is one of the best shows that writers can watch to study villains who are so damned entertaining, you almost hate to see them brought down.

Posted by Sandra Ruttan at 6:30 AM