The Commander
“The Handmaid’s Tale”

Hulu’s trailer for “The Handmaid’s Tale," expected in April, dropped on Twitter and it looks amazing. Terrifying. Disturbing. Appropriate. I can’t wait.
“The Handmaid’s Tale,” Margaret Atwood’s richly visualized dystopian chronicle, takes place in the near future. Some consider it a work of Science Fiction, Good Reads lists it as such.


Others see it as speculative. Amazon, for example. Margaret Atwood stated in an interview with the Guardian, “Science fiction has monsters and spaceships; speculative fiction could really happen.”
Recently there has been renewed interest in the title as many in the US liken the story to our current political atmosphere. There are those who might even say it is or will be our reality.

The “Handmaid’s Tale” takes place after a violent overthrow of the US government by a militarized Christian extremist group. Once in control they quickly regain order by suspending the constitution and creating a police state.
The group behind the coup replaces the government with a totalitarian theocracy dedicated to creating a “better” society based on teachings from the Old Testament and the institution of a strict class system. 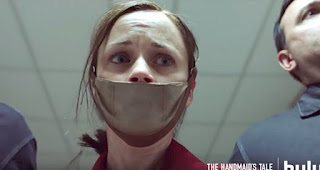 Minorities within the community are segregated for easier management. Women’s rights and freedoms are abruptly withdrawn. Finances seized. Employment stripped. They lose the right to vote. It becomes illegal for women to read.
Devalued, women become property and are eventually divided into classes. Marthas, a name taken from the New Testament, are domestic servants, needed for cooking and cleaning.

Wives are of a higher status, seen as care-takers of men. Examples of traditional values. However, the community is blighted with toxic pollution and rampant sexually transmitted diseases rendering many of the husbands sterile and wives infertile.

Handmaid’s, on the other hand, are still fertile women, valued only for their working wombs, assigned to elite couples unable to conceive. They are sexual slaves used to increase the birth rate. Instruments of repopulation. Bodies no longer their own.

Outrageous. Ridiculous. Impossible. Science Fiction. Or not. The greatest threat to the rights of women in “The Handmaid’s Tale” was complacency. Satisfied with their own lot, the elites allowed those below to be stripped of almost everything. When given the slightest comfort even the protagonist, although enslaved, seemed to find her life tolerable. She forgets to fight.
The story told in “The Handmaid’s Tale” is cautionary. Caught up in our own interests, we let things slip past us, things we should be watching for. The tiny cracks we almost don’t notice. As we read the story of Offred once again, maybe we take it as a warning given just in time.

Posted by Marietta Miles at 2:34 AM