Like most things involving fictional detectives, it started with Sherlock Holmes.  Or maybe it started before Holmes with Edgar Allan Poe's C. Auguste Dupin.  I'm talking about the detective, amateur or professional, who is brilliant but eccentric and troubled.  He or she is a committed and gifted investigator, but the gifts come with serious baggage - like deep neuroses or some type of addictive and destructive behavior.  Over the last 20 years or so, it's been as true on television as in crime novels and stories. Among a few of my favorites of this type: Robbie Coltrane's Cracker, an inveterate gambler, heavy drinker, and chain smoker; Helen Mirren as Jane Tennison, who's not eccentric or odd but who as the series progresses uses alcohol more and more as a crutch;  Idris Elba as the dark-souled and violent John Luther. The current Sherlock, of course, has played up the neurotic qualities of Holmes to the nth degree, at times presenting him as an outright mess, though he's as sharp as ever at solving crimes. Other examples abound.  And perhaps it's the familiarity of the type that has led television crime writers to take the next step and create investigators who are not merely eccentric or flawed but gripped by psychological maladies.  As they do their jobs investigating cases, they have to contend not only with the difficult world around them, but also with whatever their mental condition happens to be.

The series Hannibal on NBC gave us a Will Graham who gets deeper into imagining and visualizing the killings he investigates than any Will Graham we've seen or read about previously.  He suffers from encephalitis at one point (though nobody discovers this for awhile) and winds up institutionalized. The show takes us past the cliche of the investigator who shares enough of his serial killer quarry's darkness to understand it and thus catch his prey. Hannibal starts there, with Graham's ability to empathize, if you will, with a serial killer, his ability to think and feel as a serial killer thinks and feels, and then the show goes into a different psychological realm entirely.  You don't always feel certain that Graham will return from the realm of derangement he has the ability to access.  In fact by the show's end (assuming it is the end and doesn't return anywhere for a fourth season), a part of Graham's mind may be permanently damaged, something his nemesis Hannibal takes pride in having contributed to.  What happens with Graham, though, is progressive. He starts out as the brilliant but eccentric investigator who has unique talents, but because of what he undergoes pursuing and interacting with Hannibal, he slides into an area along the fringes of madness.  In the show, over the course of three seasons, we see him change. 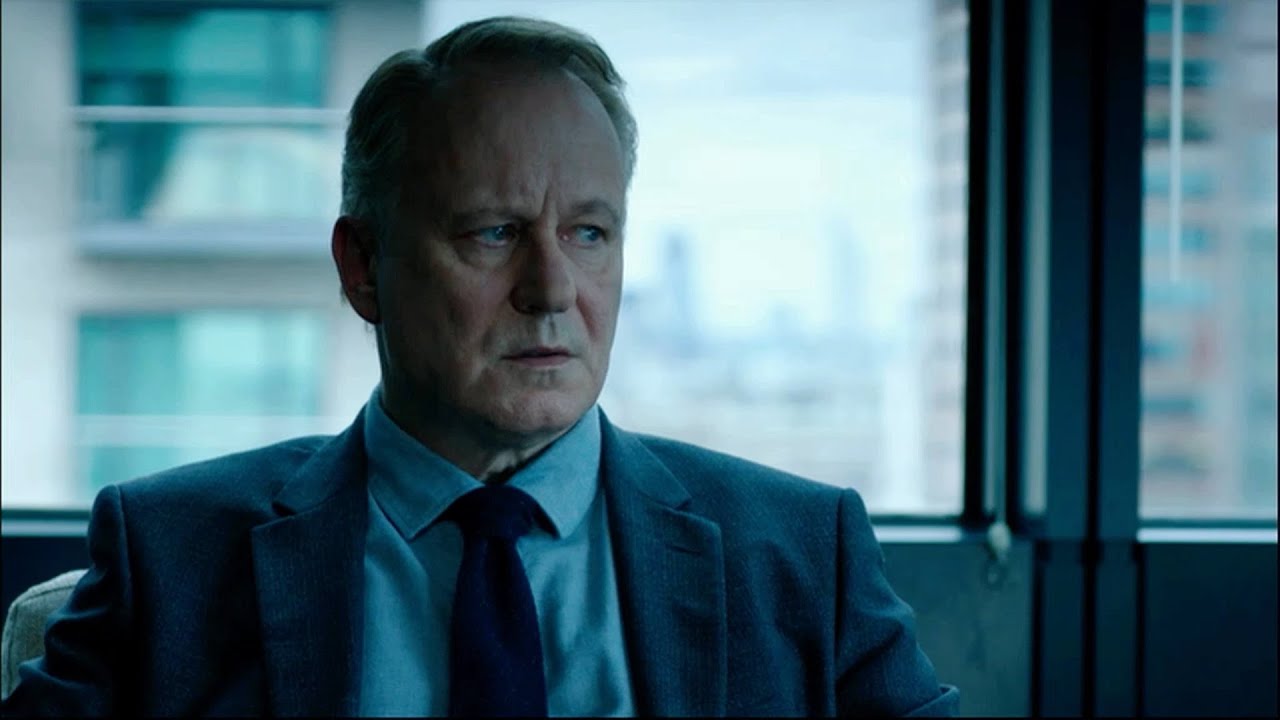 Not so with London DI John River of the British series River. The show stars the great Stellen Skarsgard as a police detective who hears voices in his head and has whole conversations with people he's known.  He even converses with long dead historical figures. This is not a condition that comes upon River during the course of the series; it's the show's basic premise.

The person John River sees and talks to the most is his former partner, who was murdered. She was both his partner and a most sympathetic friend.  Though extremely good at his work, John River can experience his visions without warning, at almost any time.  It's no secret that he has these visions, and his superior officer demands he undergo a psychiatric evaluation, expecting River to fail it and be taken off the force.  But what becomes clear to both his psychiatrist, some of his colleagues, and the audience is that River relies on his voices to cope.  The show's creator and writer, Abi Morgan, has come up with a character who is a starkly original variation on the melancholy, middle-aged, gruff cop who has trouble connecting with people.  But instead of holing up in pubs (like, say, Inspector Morse would do), he communes with people not there.  His condition becomes a metaphor for how to deal with and endure loneliness, and it also gives him a way to mourn his ex-partner.  By talking to her, he works through his grief.  As such, there's nothing about his mental health issues that strikes the viewer as exploitive or cartoony, and despite his unusualness, he quickly becomes a character you can relate to.  He's an original creation, John River, and I for one hope he comes back for another season.  What's fascinating, as Stellen Skarsgard has noted, is that River's condition "doesn't really exist as we know it. It's a combination of problems, because he's not like people who hear voices - they're usually schizophrenic and lack empathy and he does not. But it doesn't make it less truthful."

Marcella, which I just finished watching, is an eight part British series centered around London detective Marcella Backlund, played by Anna Friel.  When the series begins, she has been off the force many years, but she rejoins it after a detective on the murder squad visits her to consult her about a string of murders that seem to replicate murders that she investigated, but never solved, eleven years earlier. Marcella is a hard-driving, very focused and observant detective who clearly has a high IQ.  She also happens to be a person with an explosive temper, and when she loses that temper, if she's under great stress, she goes into fugue states in which she does things she can't remember later.  In those fugue states, it becomes apparent, she's capable of just about anything, including, perhaps, deadly violence.


So here we have another police detective struggling with a psychological condition that threatens career ruin.  She too visits a psychiatrist.  But besides her propensity for blackouts, Marcella is not a flamboyant eccentric in any way, nor does she have self-destructive habits. She does happen to have an intense, thorny personality, and her relationships with her two school age children and her husband, who she discovers has been cheating on her for three years, are complicated.  You feel for her, tortured as she is by her fugue states, but her affliction serves much less as a vehicle for audience sympathy than John River's.  Marcella doggedly investigates the multiple murder case, but she may also have killed one of the people thought to be among the wanted person's several victims.

In Marcella, we get a convoluted but very entertaining tale that involves a police person who may simultaneously be a pursuer of a killer and a killer herself, and though the series has so much going on that at times it becomes difficult to link every single plot point, I found it compelling from first episode to last.  The key, I think, is how the show withholds information, keeping you in the dark about certain points as much as Marcella is.  What she can't remember, we never see.  We feel her disorientation.  And though the main case is solved, there is no final catharsis for Marcella and not much granted to the viewer.  We end the series with the same sense of strong unease that is gripping her.

I really liked this show despite its convolutions and perhaps because it does not follow a strictly conventional linear line. From what I hear, a second series is coming. But will Marcella, who loses it when her flip is switched, find any peace?  I don't know, but I'll enjoy watching her struggle with her demons - a prime example of a contemporary type, the unstable detective.

We loved River, but haven't watched Marcella or Hannibal. Sometimes it feels like my TBW (to be watched) list is longer than my TBR pile. At the very least, they are strong rivals.

Holly - I know what you mean. Same here. Hannibal will take awhile to watch at this point since it's 3 full seasons. Marcella is 8 episodes of less than an hour each, something you can binge watch in one or two nights. Well worth it. She's a great character and there's a lot of tension throughout the series.

Hi Scott - interesting piece! I thought that River was great, but I gave up on Marcella after a few episodes. I feel guilty about hijacking your comments to state my case, but my favourite UK cop shows of recent years have been the ones that have kicked back against the 'unstable detective' character, such as Happy Valley and The Line of Duty - but that is a discussion for a whole other article! For what it's worth, I think that Happy Valley and The Line of Duty will be the shows that go on to achieve the same status as Prime Suspect and Cracker over time.

Tom - I certainly have nothing against the cop shows where the detective is stable, assuming of course they make the character or the world that character inhabits interesting. Happy Valley, I agree, is great, and that is indeed the opposite entirely of the unstable type. The main character is the center of the storm in her world. She is the rock surrounded by people with all sorts of problems. I have to see Line of Duty still. Another good one with a solid and stable lead detective is Hinterland, set in Wales. Great use of locations and landscapes in that one also.

Agreed, Scott - that stable cop/volatile environment dynamic is definitely one of Happy Valley's main strengths. Glad you enjoyed it!
I'm not sure if you have seen it, but the Scandinavian cop show The Bridge is another good one that can be slotted in alongside the other unstable detective dramas. The female detective, Saga Noren, has (unspecified) Asperger's-type personality traits, and it gives the proceedings a different dynamic. (The UK-France remake The Tunnel was very good too.)
I remember Hinterland being very striking, although I only ever watched the first episode. It seemed like a decent show. (The Line of Duty was great if you get the chance to watch it, although the second series is the best of the bunch.)

I haven't seen The Bridge yet, but the same guy who wrote the original Scandinavian version also wrote Marcella - Hans Rosenfeldt - so the detective with mental/behavioral issues is his thing right now, no question.