Folks in town have created a “crime watch” page on Facebook. A great idea, in theory. Mission, keep people up to date on the ins and outs of the neighborhood. The site helps reunite lost dogs with their owners, tracked down missing Christmas deliveries and organized a community meeting at the local elementary school to discuss, with police and other community leaders, the increase in crime on our streets.

I’ll admit, most of the time my interest in the site is less about information and more about amusement. There is something side-grabbingly funny to the random response from an angry armchair hero who, alone too long with his beer, emphatically and repeatedly announces the generous size of his man accessories in response to a bewildered post questioning strange popping sounds on the fourth of July.

I realize the page has a greater purpose. When there is trouble afoot, say tire slashing or mail stealing, involved individuals will post their story in hopes of warning others. It’s a social media version of the general store and we’re the old people talking and complaining on the bench in the front window. Except, the weight of social media chatter has far reaching and long lasting consequences.

For instance, we have our share of teenagers and these teenagers have evolved as all teenagers evolve. Slowly. Very slowly. They do teenage things. Knock over flower pots. Drop trash. Curse loudly. Smooch under on the steps of the church. They act like dogs with the gate left open. Do. Everything. Now.

This is where the execution of the community page gets a bit dicey. People are snapping photos of the kids they believe are taking part in criminal activity and posting to the Facebook page. After pictures are posted a string of comments usually follow stating the police record of said kids, their parents or any other juicy tidbits someone can pull from the archives.

All of this information brought to you directly from the general public, with little to no evidence backing up most of the claims. It all comes down to “I have a friend and they heard from their friend…”

It’s gossip. Gossip that is seen by hundreds of people on a page specifically created to circulate information on local criminal activity, a page that is not associated with the police department or burdened by the requirement of facts. It is gossip and it can haunt a kid for a lifetime.


There is also a certain amount of rabble rousing on the page. Recently, the call to arms has been so urgent I fear for the man or woman unfortunate enough to sell or market door to door.


A typical posting is distrustful and, at times, threatening or violent. “Some guy knocked on my door. Asked if I needed lawn care. Lawn Care? Shit. I told that guy he should run.”

Ugly responses and comments follow. “Better be glad he didn’t come to my door. I’d introduce him to Smith and Wesson.”

A few days ago, a young man knocked on my door, explained his boss would be coming through the neighborhood giving free estimates on gutter and window work. Would I be interested?

“No, thanks,” I said. Visibly relieved with the simple and underwhelming response, he motored on. I felt bad for him. I wanted to give him a juice box, a can of mace and prayers for safe passage. 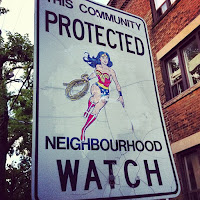 There is definitely a use for these sites, these new world community boards. We don’t really have block parties or founder’s events. No potlucks or over the fence chats.

Around these parts, most parents work two jobs to make ends meet. The days of Gladys Kravitz sitting in her window, keeping watch on the suburban sprawl are gone. This is how people touch base, remain involved but a mass bulletin, forever filed on the web, probably needs better execution.

I don’t believe this page should be taken down. Please, no. It’s a favorite stop. Frankly, you could arc an entire novel in one post and its kooky replies. The inspiration!

Perhaps the answer is as simple as someone keeping watch over the neighborhood watch.

Posted by Marietta Miles at 9:14 AM

Welcome to DSD, Marietta! There's a novel in this community watch thing!

sorry. that was me. don't know why it marked me as anonymous. lol.