Hiding Bodies with Your Family

My husband took three weeks off of work for the holidays and while we were all at home, I said something to the effect of, "I want to go to Julian to look at old mines."

"I need to research good places to dump bodies in our area."

And because we've been together nearly ten years, he didn't ask anymore questions and we went to Julian to look for good places to dump bodies. 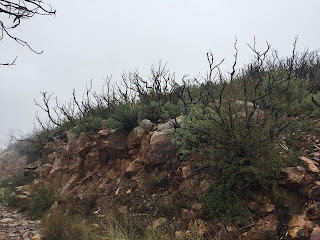 Trudging through the mud and walking the same trail my characters walk was a pretty cool experience. It opened up a lot of possibilities for things that could happen on their hike, and ways things can go wrong. Having my husband and kid there made it fun, of course, but we also got to talk about how the terrain would affect things, how assumptions I made in writing were wrong, and come up with new ideas for how this section of the book will go. There's definitely something to be said for being somewhere versus looking it up on Google Earth or simply having been there once.

There are also all kinds of cool details you get from actually being somewhere that don't strike you as much, scanning over photos taken at all different times of day and year. One of the things that drew me to Julian as a place for my characters to run to when left holding a dead body was the fact that the abandoned mines off the trail are more accessible now due to repeated wildfires burning the brush away. It was too rainy (and we were basically inside the cloud) to see the slopes, but I was struck by how the blackened, burnt trees jutted out from flowers and rocks. 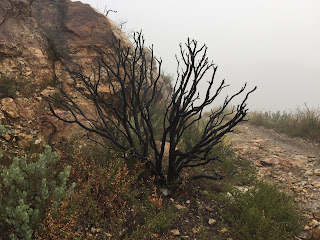 The biggest revelation was that dumping a body down a mineshaft is a hell of a lot harder than I assumed (and I didn't think it was easy). The mines I scurried around on hikes in my childhood are up in the foothills of Central California. I made the assumption that a mine shaft in Central California and in Southern California would be relatively similar. We were unable to take a look at the more dangerous, better hidden mines off the trail because of the rain, but we visited Warlock Mine and I was surprised to see that it looked nothing like the mines I remembered from my youth. 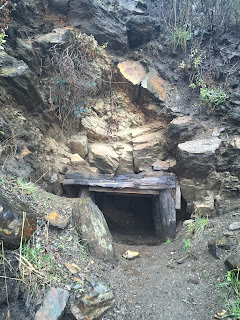 Now, this could have been a problem. An "Oh shit, this major part of my story doesn't fucking work," problem. But I had the benefit of my husband there to talk through how the scene would work with a mine like this, and it turns out this doesn't ruin anything - it is going to make everything way more fucked up and interesting. You can thank my husband for what will possibly be the most uncomfortable moments in this WIP, and you can thank him for crawling into an abandoned mine in the mud to get me interior photos.

Seriously, give this guy a round of applause. 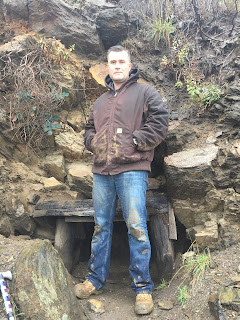 The kid was really disappointed that we didn't let her slither in there, too, but we've got limits. Besides, if someone offers to crawl in the mud into a dangerous space for you, you just let them and tell everyone else to stand back.

And if you're feeling bad for him, we all rewarded ourselves with one lb slices of fresh apple pie when we were done.