Our beagle, Indy, passed away yesterday. He wasn't sick long; a week ago he was still walking around the yard. By the weekend he couldn't get to his feet at all. 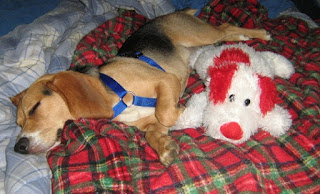 There's a lot of sadness that comes with a pet passing, but there are also a lot of good memories. Indy - Indiana - was so named because he came with a docked tail. No explanation, and as a failed hunting dog who found his third home with us, there was a lot of his history we didn't know, but could only guess at.

Like the way he'd cower when we pulled out a broom to sweep the floor.

He had his distinct traits. He loved pizza crusts and bread. He would walk around the house whimpering with a pizza crust hanging out of his mouth like a cigar and things would go one of two ways. If he went outside he'd bury the crust. If he stayed in, he'd hide it under Brian's pillow.

We have a lot of pets. We also have farm cats that aren't ours, but we feed and they hang out inside a fair bit, because they were born in this house. One of the things that Indy's passing got me thinking about was the distinctions between all of our four-legged characters. 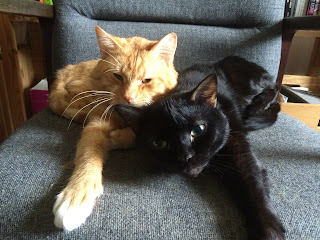 Pumpkin will meet me at the bottom of the stairs and escort me up to the bedroom when he thinks it's bedtime.

Echo is so fearless that he thinks sweeping the floor is a game he should get in on. 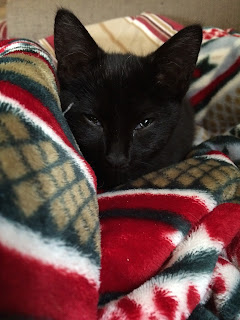 Sasha loved Indy, and would greet him at the door every time he came inside. 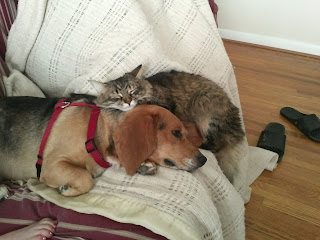 Boots has security issues. He either sleeps on a kitchen counter or in our recycling bin. He freaks out if you take him upstairs or into another room.

Mo has always been a bit of a butthead, especially to our Cookie, who passed last year. Cookie didn't like other cats. We adopted them from the human society together, and they insisted they'd be fine together, but it turned out Cookie didn't like other cats at all. Mo would hide in a nook in our hallway and when Cookie would come down the hall he'd jump out at her and freak her out. 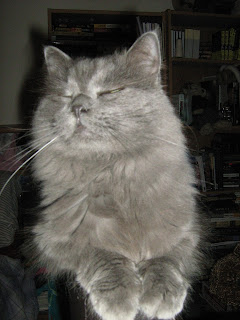 For many of our pets, we're their final home, but not their first. They're rescues or strays. All of their quirks prompt me to consider how that trait developed.

If you're struggling to think of ways to flesh out your characters, if you're wondering how to ensure they're all distinct, think about your pets. I'd had many dogs before Indy. Bingo, Suzy, Bandit, Taco, Chinook, Nootka. And yet Indy was the only one who had a thing for pizza crusts.

Our four-legged friends aren't just part of our family. They can inform us of the ways an individual distinguishes themselves from another. And when you don't know a character's past, their quirks may offer hints.

There will never be another Indy. We were so so lucky. He had the perfect personality for being a family pet, and has been a vital part of our family for 7.5 years. And even in his passing he's with me today as I think about writing, and what it is that breathes life into our characters. 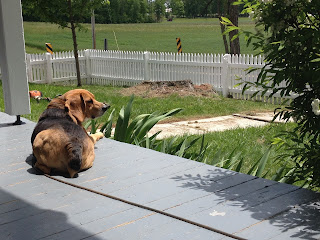 Posted by Sandra Ruttan at 8:28 AM

A lovely remembrance for a pet lost. Thank you.

Great post, Sandra. I'm so sorry for your loss. Having only had rescue pets (including two dogs currently) I get what you're saying about wondering how their pasts shaped their personalities. My dog, Stella, is a rescue from Los Angeles, and she rarely listens to us. For awhile I thought her first language might be Spanish. Unfortunately, she doesn't listen to us in Spanish, either. We'll have to keep trying languages.

And I'm assuming you're sure she doesn't have hearing problems. There really is a market for pet psychology isn't there?

She definitely doesn't have a hearing problem. Girl can hear the kibble jar opening five miles away.

So sorry for the loss of your beagle. I've had three in a row and they break your heart.

Lou who is snoring on my ottoman also eats pillows, so there's that.

Chester and Cheeto cat in my house vote for more beagles. It's the best thing ... being a home for another. It helps.