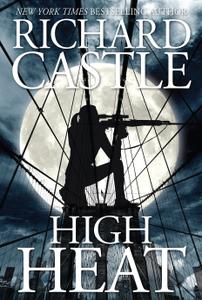 Anyone who knows me or has followed my blog knows I am a huge fan of the “Castle” TV show. I was crushed when, at the end of season seven, there was talk of cancellation. Then we got the glorious news that “Castle” would return for an eighth season. Was there anything better than more “Castle”? Well, if you watched season eight, you knew the answer to that question. Yes, sometimes more of something isn’t always a good thing.

The books by the heretofore unknown author behind the pen name of “Richard Castle” have almost all been uniformly excellent. Naturally, some are better than others, but on the whole, they are all very good books that capture the spirit of the television show as well as echoing and mirroring some of its contents. For example, when the TV show characters Castle and Beckett kept playing “will they or won’t they,” their counterparts in the novels — Jameson Rook and Nikki Heat – got together by the end of the first novel, HEATWAVE. So, for the first few years, readers got to see what it would have been like had Castle and Beckett got together. Now, with book eight, much of what clogged the eighth season of the television so has also clogged HIGH HEAT.

What am I saying? In short, I liked HIGH HEAT, but I certainly didn’t love it.

The novel opens with a scene that you could call ripped from the headlines.  A group calling themselves American ISIS has released a video. In the video, a hooded victim is decapitated. As gruesome as the video is, what really chills the blood of Captain Nikki Heat is the final proclamation from the masked terrorists: their next victim is to be Jamison Rook, famous journalist and her husband.

Naturally, the crime is committed in the 12th precinct, and Heat and her squad jump into action. The victim is identified—no spoilers here—and they are well on their way to working out the case when the Feds show up. Guess what? The NYPD class with the Feds. Also as you might expect, Jamison himself is nowhere to be found. When last Nikki heard, the famous journalists was following one of the three presidential candidates, Legs Kline, the Donald Trump stand-in for the novel. For the record, there is a Hillary Clinton Stand in as well as third-party candidate Gary Johnson. Again, with the events of the novel mirroring real life, the author all but reveals his opinion of our own recently completed presidential election even though the book was readied for publication long before the results were counted.

The supporting cast are all back in this one. This little universe of Nikki Heat novels is pretty good. I have always enjoyed the stand-ins for the TV characters, but the ones unique to the Heat-verse are equally good. There is one aphorism that says the sum is greater than the whole. In other books in this series—NAKED HEAT especially—that is true. In the case of HIGH HEAT, I’d say the sum is just equal to the whole. All the ingredients are there and what is spat out is exactly what you’d expect. Nothing more, nothing less.

I listened to the audio version and Robert Petkoff, as he has done since he replaced original narrator Johnny Heller, does a good job of narrating with his ruggedly handsome voice. The way he reads the prose and delivers the dialogue, it really is as if Nathan Fillion AKA Richard Castle is reading the novel.

Oh, and if you hated season eight of the TV show, well, there’s a tangent in this book that, well, ugh. Don’t want to give too much away. There’s certainly going to be a ninth book in this novel series. I’ll certainly read it because I’ll consume everything related to Castle. And there’s an ingredient that literally shows up in the penultimate line of this novel. That alone will make Book 9 special. And, most importantly—and I fully expect this to happen—the ninth book, likely the last in the series, will give Castle fans, and Nikki Heat fans, true closure, the kind of closure we didn’t really get from the TV show.
Posted by Scott D. Parker at 8:29 AM

I've never read Castle or watched the show. Maybe I should?

CASTLE the TV show was one of my all-time favs. The conceit was that Richard Castle, famous author, had writer's block. At the same time, there was a killer who staged his crime scenes like scenes from Castle's Derek Storm novels. NYPD Detective Kate Beckett ends up working with Castle to solve the crime. Castle enjoyed the process so much that he used his influence with the mayor to allow him to tag along with Beckett as she serves as the inspiration for a new series of detective novels featuring a NYPD detective, Nikki Heat.

Then, in real life, in the second season, they started publishing real novels. So you'd have the situation where you'd see the cover for the new book on TV and you could go buy the novels. It was a trip...and it was awesome.

The show is quirky, funny, and geeky. Nathan Fillion does a great job at being a man-child most of the time. But the real star often was Stana Katic's Beckett. As a show billed as funny, CASTLE could knock your socks off with drama. The slow burn build between the two leads definitely payed off as the years went on. There were times in which I thought the show could have been called BECKETT. The chemistry between Fillion and Katic along with the two other main detectives--whom between themselves also had great chemistry and grew to be just as fun as the leads--all were great.

There were 7 mostly great seasons. Then there was the 8th. Not kidding: if you choose to start watching, I'd recommend ending with Season 7's finale.

And the books themselves are pretty good examples of good, decent police thrillers. And I'd also advise listening to them. The narrators are wonderful.

CASTLE was good at planting Easter eggs for fans, such as the Halloween episode where Castle's costume was what Mal used to wear on FIREFLY. (Both characters played by Nathan Fillian.) Esposito's costume was also what Jon Huertas wore in GENERATION KILL.

My favorite was always setting the stories in the 12th Precinct, Barney Miller's old stomping grounds.

CASTLE's early seasons were a real treat, less so after Beckett made her abortive FBI move. I stopped watching altogether after Richard didn't make it to the wedding and they wrote the whole "He'd been living on the beach and remembered nothing" plot line. That's when I thought it jumped the shark.

You've convinced me. I'm gonna watch it. It doesn't appear to be streaming anywhere, but I can buy it if I want. I'l probably wait and see if it streams anywhere.

We watched the DVDs from Netflix. I'd imagine they'll still be there.

Dana - I never caught the Barney Miller reference. Granted, I never watched Miller as I was too young.

Holly - Great! Now, if we lived in the same city, you could borrow my DVDs. I'll echo what Dana said: Lots of in-jokes and such, especially early on. Now, to get the true experience, I'd recommend you watch a season then read the corresponding book. So Season 2 starts when Book 1 is on the shelves.