There’s this meme you might have seen on social media. It’s a recent picture of two punk icons: Henry Rollins of Black Flag fame, and Ian MacKaye of Minor Threat and Fugazi.

I had a good laughed the first time I saw it years ago, and I’ve definitely shared it a couple of times since then. It always seemed like a good way to poke a little fun at a self-series scene, while acknowledging that my punk-loving friends and I are getting older too. But lately something has changed. 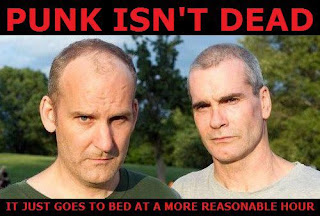 Writing the Greg Salem series—about a disgraced East LA police officer by day and a punk musician by night—gave me the opportunity to fall back in love with 70s and 80s punk rock. I mean, I never really stopped listening, but long ago lost that childish fascination with the people who made the music and their lasting legacy.

Doing research for BAD CITIZEN CORPORATION and GRIZZLY SEASON has meant diving deep into the catalog of my favorite bands, but something unexpected happened along the way—my passion for punk got reignited, and now I can’t get enough of these fantastic stories.

So here’s a list of some punk books and films I’ve consumed in the last couple of years. As the Descendents would say, “Enjoy!”

S.W. Lauden’s debut novel, BAD CITIZEN CORPORATION, is available from Rare Bird Books. The second Greg Salem novel, GRIZZLY SEASON, was published on October 11, 2016. His standalone novella, CROSSWISE, is available from Down & Out Books.
Posted by Holly West at 3:00 AM

Good list, Steve. Another good one is American Hardcore. And some others whose names escape me and I'm too lazy to go in the other room and see what they're called. But there's a lot of good stuff out there.