This week, S.E. Hinton was asked on Twitter whether she'd intended for two characters in her novel, The Outsiders, to be gay.

I spent years in academia, arguing that the white whale was Jesus, that Holden Cauliflower was a communist, that Nathaniel Hawthorne was readable. Heck, five years ago at this very site, I wrote a thing about "what the author meant."

And I've seen many, many, many authors get beaten about on Twitter for saying things about their own writing. One sci-fi author caused trouble when he said he didn't think he was very good writing women's voices. Another best-selling author was in the middle of trouble when he was asked why he, a white guy, didn't write more about race in his novels. The author said, well, you know, I don't have many black friends. And so on and so on. You could spend days reading the results of "author twitter controversy."

Which brings us back to Hinton.

As a white, cisgen middle-class dude, I had plenty of people to identify with in books. At times, it seems to me that nearly all of the books in the stores, on the shelves, being reviewed are books written by people like me about people like me. While I was writing this paragraph, another coming-of-age novel about a white guy in Brooklyn was published.

I don't know what it is like to grow up gay. I do know that if I were a gay kid reading a book and found someone who seemed to be like me, I'd think that was pretty cool. Before social media, I'd just kinda hope it to be true, I guess. But, imagine if you were that kid and you could ask the author something along the lines of, "Hey, I think maybe I can kinda identify with this character. Is that cool?"

Again, I can't really know what that must be like, because so many of the books I was handed as a kid were about people like me -- straight and white and middle-class. Hell, even the guys in Murakami's books listen to the Beatles, you know?

Anyhoo, on Twitter @MrCadeWinston posted about The Outsiders and asked Hinton the question:: 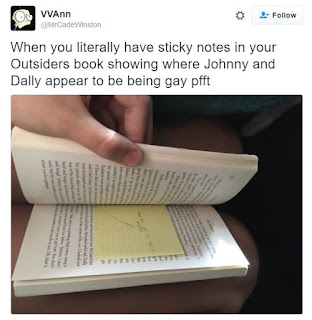 Now, there we go. Boom. Done. Here's my copy of this book. Here's my reading of this book. I can identify with these characters and love this book. Or maybe you're straight and this character seems gay, and so it makes you dig the book more. Or a parent in a book, who is written as a nice guy, seems to have an undercurrent of meanness that you've picked up on.

Your reading of a book is super personal. Which, you know, is why I like books and hate movies. In movies, actor read lines. In books, you're allowed to read between the lines. It's cute, but it's cute. And speaking of cute, well, here we go (screenshot from Vulture.com's story): 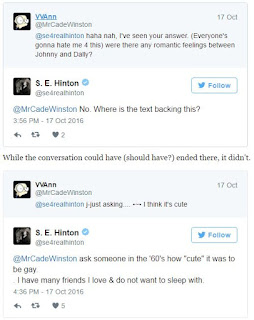 Yup. They nailed it. "Are they gay?" someone asks. "No. Did you read them that way?" or whatever. Or, as others have pointed out, it could have gone something like this: "Are they gay? They seem gay to me?" the reader says. To which, the author responds, "Well, I didn't write them that way, but it's totes cool if you read them that way. Cheers." or something about how there are 13 ways to look at a blackbird or skin a cat or whatevs. But, as everyone has said, the "cute" response was a bit of a turning point. If you've been on social media for more than three or four minutes, you can look at that Tweet and know you're about to see some fireworks.

Which, you know, is understandable. Next week folks will move on to something else, of course. Heck, maybe sooner if Franzen gives an interview somewhere.

What's left after the smoke clears is a kid who maybe identified with two of the characters. While you can scroll through Twitter (at your own peril) and see the many mistakes made by many people, what we're left with is someone asking about a hope, a dream, a connection. Yeah, we've got an exciting Twitter squabble and everyone gets to take sides and it's fun and political and share-worthy and all that.

Out there in Tulsa or Wichita Falls or Lyons, someone is reading a novel a little differently than the author intended. Someone is finding something hidden in there, making a connection that the author set up, but maybe didn't quite mean to deliver on. So what? Who cares? That kid who isn't like me cares. That kid who was assigned a dozen books in school to read, each book about straight, middle-class cisgen white folks. Who is going to write about race? Not Franzen. Who is going to write about gay boys? Not Hinton, it seems. But who is going to read about them? Who is going to read about people like you? You are.

If you're reading one of the Greasers as gay, please be careful asking the author if your reading is the "right" reading. If a character seems like you and you're digging the connection, I dunno. I get wanting to have "the answer" and how validating that would be. It's just, well, you should never meet your idols. I mean, you can if you want. Don't let me stop you. Just, be prepared for disappointment and sadness and vague nausea that hits each time you hear an Air Supply song afterwards. Believe me.

That Hinton appears to have shut down this reading of characters saddens me, but it's understandable. She was asked a question and answered honestly. Things went sideways from the "cute" exchange. You know, if you're asked a question, it's reasonable to think you'd want to answer it honestly.

Of course, we're fiction writers. We should know better how to lie our way to something better than facts, something more beautiful than the truth.

If you're looking for LGBT reads that are, ahem, open about their characters, here are some lists:

Quirk
Posted by Steve Weddle at 7:20 AM

I don't mean to tell Hinton what she should have done, but the answer seems obvious: "I wasn't thinking of a gay character when i wrote him, but there's no reason he can't be. If you picked up on something that helped you enjoy the book more, that's great. Thanks for letting me know." Period.

This comes with one caveat: If the character turns out not to be the way the reader envisioned, for whatever reason, that's not the author's problem.

Finally someone says it. Nathaniel Hawthorne is indeed unreadable.

Fan entitlement. If imagining characters were gay helped you, that's great. It doesn't mean the author has to change their intentions. It doesn't make Spock and Kirk gay even though reams of slash fan fiction was written about them. If Hinton acted offended there'd be something worth talking about here.