Jane Got a Gun - review 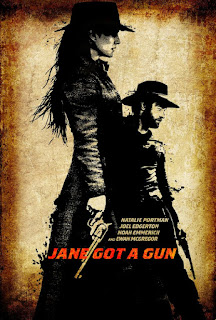 Jane Got a Gun is a western from earlier this year.

A woman asks her ex-lover for help in order to save her outlaw husband from a gang out to kill him.


The Good - The middle section of the movie is pretty strong. Dan, Jane, and Bill are under siege. They have to prepare the homestead for battle, then defend it when it happens. Tough talk and gun play is on display here. And even if it all feels a little familiar, it all works nicely.


The Bad - The film utilizes a simple flashback structure to flesh out the parts of the story that you need.  The flashbacks serve to tell us more about the Dan and Bill characters; and since Jane is connected to both of them, we learn more about her too.

The first Dan/Jane flashback works because it establishes, briefly, the foundation of their relationship in an economical way. The rest of Dan's journey is told in the present and augmented by flashbacks. These Dan only flashbacks serve the story well. The additional Dan/Jane flashbacks doesn't really add much more to the story that we already know. The flashback basically serves as setup for a line later in the movie and both scenes fall a little flat and don't land the way that they were probably intended to.

The beginning is too rushed. I understand that an in medias res start was desired but this one was too rushed.Since we know nothing of the Bill character from the moment we meet him, and he is bed ridden and recovering from being shot in the entire present timeline, his flashbacks come off really well and give us VERY necessary character development and relationship development.


The Weird - There are two things that, historically, have shot well in westerns: landscapes and men's faces. Both are on full display here. Jane Got a Gun was shot in New Mexico and the exterior shots are gorgeous. The scope, scale, and beauty are are all wonderfully captured.

The second quality of westerns, one that rarely gets discussed, is how westerns are great showcases for men's faces. This about some of your  favorite westerns over the years, some of the best westerns over the years. Now think about those faces. Weather beaten faces with crooks, crags, crevasses. Unshaven faces with scruff, mustaches, and beards. From John Wayne and Ben Johnson to Robert Ryan and Woody Strode to countless others. When you think of the best character actors of all-time the list will be dominated by western actors. The western is so kind to the male face that it even does wonders for non-traditional faces like Jack Elam. There are tons of modern equivalents too: Sam Elliott, Jim Beaver, Clint Eastwood, Sam Shepard. Jane gives us two good male faces. Noah Emmerich has a pockmarked face meant for the rough living conditions of the western and Joel Edgerton has an interesting face and a full natural beard ( I hate fake beards).

Conclusion - The first 15 minutes or so of the film are rocky, the middle siege section is strong, the end is a little to pat. Jane Got a Gun is streaming on Netflix and is recommended.

Posted by Brian Lindenmuth at 8:35 AM

Watched this awhile back and enjoyed it.

And the current holder of the World's Craggiest Man title, Scott Glenn.