Yes, another Bouchercon post. But in my defense, this is my first con so I’m all excited.
Last week, I wrote about my first impressions of the convention itself. Today I’m focusing on the panels that I attended. I’m not sure which person or group determines the subject of the panels, but they did an excellent job. There were so many panels to choose from, and the ones I liked best work on at the same time (natch) so I had to make difficult choices. 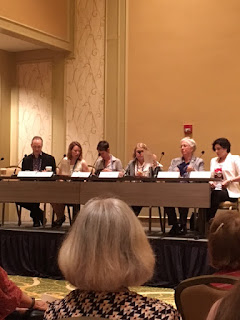 First up was “Of All the Ladies I Know.” The subtitle of this panel was “Corsets and Crime.” What this panel ended up being was how these authors—all women save the moderator—wrote historical fiction from a female author’s point of view. The big name that I already knew was Laurie King, author of the Sherlock Holmes and Mary Russell stories. One of the reasons why I write my stories set in the past is echoed by a quote from CS Harris: “Historical fiction eliminates technology and gadgets and relies on the wits and brains of the protagonist.” When moderator Andrew Grant asked why many of them picked a male lead character, most of the women had come to the same conclusion, because women just couldn’t do what a man could do at the time their stories were set. One particular note about dialogue was made by King: If something is factually correct but would kick the reader out of the story, she changes the word. 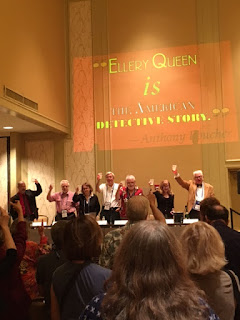 “Murder by Numbers: Ellery Queen, Their Works, and the Magazine” was a great panel. James Lincoln Warren was the moderator and the panelists included not only the current editor and book reviewer for the magazine, but Otto Penzler and Shelly Dickson Carr, the granddaughter of John Dickson Carr. This panel started with a history of Ellery Queen, the character and author. Next it touched on the magazine, its genesis and how it’s doing today. What fascinated me most was the behind-the-scenes details provided by Janet Hutchings and Steve Steinbock of how the magazine operates. 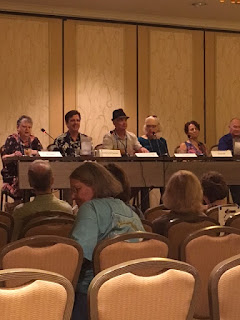 “On the Nickel: PI” focused on private eye fiction. The biggest name on this panel was JA Jance. One of my characters is a private investigator so I wanted to see how veteran authors covered the subject matter. One of the biggest revelations was the difference between a private eye in real life and a private eye in detective fiction. No matter the medium, when dealing with fictional private eyes, they seem to always be in conflict with the police. More than one writer on this panel concluded that a good PI works with the cops and the cops accept the PIs because, in the end, they’re all going for the same thing. Good private investigators work with the cops, and that becomes their bread-and-butter cases. That would certainly make PI fiction more difficult to write. 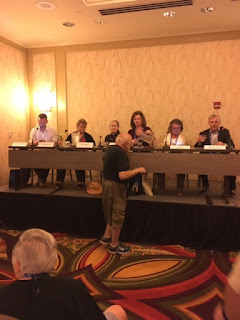 Another great panel was “Golden Years: the Golden Age of Mystery.” Martin Edwards was the moderator and Do Some Damage’s very own Claire Booth was among the panelists. I had to chuckle when I looked around the audience wondered by how much I brought down the average age. Martin was very well prepared for this panel and even sent out questions ahead of time to give the panelists time to think about their answers. An idea that never occurred to me was that the torch of the traditional mystery has been carried on by cozy mysteries. It makes sense. Martin dug deep into the topic, trying to figure out why Golden Age mysteries fell out of fashion but also why the authors on the panels still wrote them. When asked what they had learned from Golden Age fiction, Claire was the first to respond. “Structure.” Moreover, she liked the idea of playing fair with the readers—every author repeated this comment—yet still keeping them guessing. All of the panelists concluded that entertaining readers was most important when writing. What I particularly enjoyed were the responses from the audience when the panelist named their favorite unknown Golden Age authors. 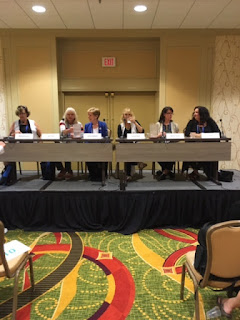 Perhaps the most surprising panel that I attended was “Bleeding Love: Romantic Suspense.” Allison Brennan was the moderator and hers was the only name I knew ahead of time even though I have not read any of her books. I like the opening question: what is romantic suspense? The panelist concurred that is a dual ending, namely a Happily Ever After ending and the Bad Guy getting caught. The hardest part, Anne Cleeland said, was having to get the love interests to fall in love quickly. This was the only panel at which I asked the question. I asked if the TV show “Castle” could be considered romantic suspense. I thought the answer was yes, and every panelist concurred. My big takeaway from this panel was from Allison herself, saying that you could do almost anything you want in romantic suspense as long as you have an HEA ending. In fact, she said that if you figure out the setup, the book all but writes itself. 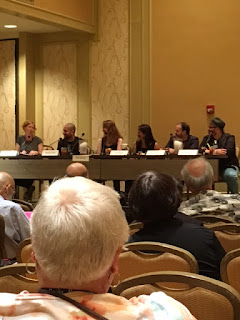 Naturally I attended the “Once in a Lifetime: How Did I Get Here?” panel because it featured some Do Some Damage writers, namely Russell McLean and Jay Stringer. I had met Russell once in Houston, but I had never met Jay. The panel was as entertaining as you would expect it to be and it was fun to hear the stories of how these authors became authors and all the interesting jobs they had before they were able to quit their day jobs and write full-time. I especially liked Jay’s commentary on the difference between a “writer” and “an author.” If you look at the photograph, you’ll see Jay, far right, wearing a hat. He took off the hat and said “this is a writer.” Then, putting the hat back on his head, he spoke in a more professorial style: “And this is an author.”
Side note: that leaves only Steve Weddle as the only DSDer I haven’t met. BTW, did you read his column on Thursday? Brilliant.
So, yeah, I had a great time in New Orleans. I even managed to dictate some new chapters on the commute back to Houston. I expect this will be the last post on this subject for a time, but you never know.
One of the people I met was Susan Simpson. She’s from Alabama, and she helps run KillerBooks. For all you mystery fans out there, I have to say this is a nicely curated site devoted exclusively to mystery fiction. If you haven’t had a chance, you should head over there and take a look.
Posted by Scott D. Parker at 1:00 AM

Email ThisBlogThis!Share to TwitterShare to FacebookShare to Pinterest
Labels: Bouchercon 2016

It was a treat to get to meet you in person, Scott. I'm glad you could make it and hope to see you at another Bouchercon soon.