Your book is not my book

For whatever reason, I live on the same planet as lunatics. Sometimes they attack writers online because, heck, I don't even know anymore. Not even writers. Ellen DeGeneres got called a racist. 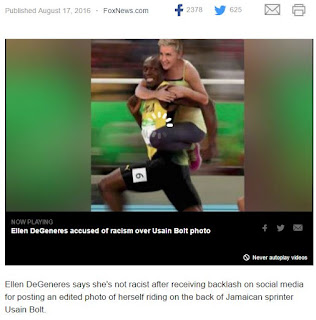 I see folks online going after a movie star or an author or someone who works at Taco Bell for something or other. Your characters are homophobic. You need more Lithuanians working at your store. No one in your book looks like me. I think your main character is a stereotype.

OK. You think someone doesn't have enough women in their novel? Or enough people of color or enough rural Americans. Yeah, I get that. Cool. Let's discuss it, if you want. These are important discussions for us, especially on a planet with lunatics. Let's understand each other, listen to each other. Yelling and threatening aren't nice.

It's great that you're passionate about the novel you saw reviewed or about photos posted on Twitter or comic books that are changing. The Hulk is Asian-American. Ms. Marvel is Pakastani-American. Captain America is African-American, unless you're talking about the other Captain America who is a Nazi.  We have all kinds of new stuff happening and if you're attached to characters, I get that you're passionate about them. Coolio.

But attacking authors -- or Ellen -- online for a posted photo or a novel doesn't seem helpful.

When everyone is a racist, no one is. (I think that was in The Incredibles movie.) If you call Ellen a racist, then what happens tomorrow when someone does something that's really, for real, truly racist? Or when you see some subtle form of racism that's more pervasive and can't fit into 140 characters? Or when you've hit five racists today and five tomorrow and so on, what's left this weekend when you really have something to say? Believe me, there's racism out there, and Ellen ain't it.

And when social media is used as an attack zone, many creatives will retreat and avoid social contact with folks, and that's a shame. Twitter is a great leveller in that I can tweet to some of my favorite authors, jugglers, musicians and maybe they'll hear me and tweet back. How cool would it be to get into a conversation with your hero on Twitter? But if we're attacking artists, maybe they'll just sign off altogether. We make the fellowship hall so toxic, no one will hang out. Lauren Zuke left, as have many others. Soon, Twitter is just a billion angry people and my 47 fake accounts. Where's the fun in that? Social media is supposed to be kinda social, you know? We should be nice.

And, I guess the point that really stands out for me is this: If the people in a book don't look the way you want, then write your own book. If you don't like a movie in which all five people on the rescue party are white, I get that. I totally get that. And maybe something could be done about it. Maybe after all the outcry with the new Star Wars movie being almost all white, maybe that caused them to do better. That's cool. A discussion. A working together without the assumption that the artist is evil. But what really helps, at least in my thinking, is for more folks to write more stories with different folks in them.

Jonathan Franzen got blown up on social media when he said he wasn't the person to write a race relations novel because he didn't have many "black friends." So Twitter went after him. Well, would you want to read a Franzen novel about race relations? Would the people yelling at him read that? Or were they just seeing another dumb thing someone said and going after him because it's kinda fun to kick people around? I don't know that Franzen is the dude for the job. I would imagine the world is full of folks with honest experiences who would do a better job. So instead of bashing Franzen, write your own damn book.

If you don't like Franzen's books, don't buy them. Use that money to buy some pens and paper and write your own damn book. Please. Tell the stories you want to share. Your book is not my book. My book is not your book. You don't have to kick Franzen in his testicles, you know. Please, tell your story.

That being said, we could all probably do a better job of sharing positive stories about people doing good things, you know? Look what yelling and being mean have gotten us. Sad!

Being nice is cool, but sometimes that's asking too much. Maybe we could share nice when we see it?

Oh, and Alyssa Rosenberg at WaPo says the some I would have said if I were smarter:

Anyway, be nice and write your own book, I guess. And when you see a book or comic or movie doing a good thing in terms of uplifting us, let us all know. Some of us are still on Twitter and would like to hear about the good stuff. Thanks.
Posted by Steve Weddle at 3:00 AM

All very true, Steve. And said without judgement.

Thanks Art and Kristopher

I've been kicking around writing a post on this subject myself. You have raised the bar for the discussion considerable with what you have here. Thanks a lot, prick.

Thanks Dana and JJS

Which is why I don't read or use social media. All that static.

RR, Yeah. Sometimes a nice signal can come through all the noise. The ratio is pretty dismal though

Do you think it's going to go away, though? I don't. I think it's only going to get worse. And I even think it's wise for celebrities and other people who are easily targeted to withdraw. Who needs the hassle?

On the other hand, websites like this one and most of the blogs with commenters I read tend to be quite supportive and humane. There might be a rant about a topic, but rarely does the poster or commenter get raked over the coals. So maybe it's just a case of where you get your social media fix.

SG, This place is much nicer since Dave White left. That dude was trouble.

And here I was, thinking it was John McFetridge who was the rabble-rouser.

Well said. And I think a lot of writers tend to second guess themselves these days, worried about the possible reaction toward what they write. And I think that's a bad sign.