On Bonnie & Clyde and Tropes.

It's no secret that I love working with tropes. Tropes get a bad name because it often feels like an excuse not to do the work of creating something new, but I don't think that's the full truth. A lazy writer will write lazily regardless of tropes and archetypes, and even a mythical "original idea" can be ruined by a writer unwilling to do the work.

The reason tropes exist in the first place is because people relate to these stories and archetypes strongly enough to repeat them over and over again. And as Joe Clifford is fond of saying, "there are really only two stories - a person goes on a journey, and a stranger comes to town (which are really the same story from two different perspectives)." I gave up the desire to create something "wholly original" not because I'd rather riff off other people's work, but because I'm a realist. People have been writing fiction for thousands of years, and it's all "a person goes on a journey or a stranger comes to town." What makes fiction compelling, interesting, and original, is what we do with those two premises.

So when I set out to write my modern Bonnie & Clyde story, I wasn't worried about inventing a new story. I was worried about creating two characters that are interesting and compelling, and putting them in situations the reader doesn't fully expect. I focused a lot on what made the real Bonnie & Clyde so popular in their time - which isn't all that different from today, really. Historically, Bonnie & Clyde got a lot of adoration for sticking it to the banks during a time that poor people were really fed up with the financial status quo, watching people lose everything while the rich still managed to get richer (sound familiar?). 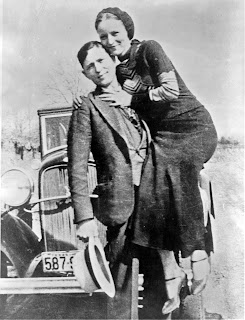 I worked with this idea a lot through the first ten thousand words (and that first ten thousand actually got started and ditched a few times, so maybe the more accurate number is thirty thousand words). It's a story for our time, as much as it was a story for theirs. The thing that jumped out at me, reading up on their lives and the conflicting details that have managed to work their way into the popular consciousness is that the reason they were popular then, and the reason they resonate now - is not the reason their story has lasted over the decades. It's been over eighty years since they died in a hail of bullets. In those eighty years, the economic climate has rippled and spiked enough that their long lasting appeal can't be attributed totally to sticking it to the banks.

When it hit me, goddamit it was so obvious.

Bonnie & Clyde is a story about two people who opted out of the American Dream, sure. It's a story about sticking it to the banks. The power of celebrity. The way we view violence and crime.

It's all those things.

Depending on which version of the story you believe, Bonnie was a garden variety hybristophiliac, turned on by Clyde's criminal past and eager to join in the fun. Others seem to believe that Clyde would have been okay if Bonnie hadn't pushed him further in her thirst for fame. There are a dozen different variations on their specific story, and a million ways to tell a story like theirs.

My characters aren't a whole lot like the public image of Bonnie & Clyde, but they are criminals who've seen the lie inherent in the American Dream and they are two people bound to each other for a variety of reasons that have to face off against a world full of people who'd sooner see them dead or behind bars. The more I work out what makes their story special and meaningful, the happier I am that I'm taking old stories, tropes, and archetypes, and fucking with them until I get what I want.

That sounds great, esp the lie in the American dream. Also weird because my current WIP is set in 1933 and features the real Bonnie & Clyde. Small world.

I really think we're going to see a lot more of these two real soon!