A Note on Community

You ever have one of those days so full of different emotions you feel wiped out by five?

Now, aside from being pretty cute, and fun to watch, the mouse wasn't a big part of our family. Mice aren't the most interactive pets, and I hadn't really formed a strong bond with the little furball. But I'm not six. My kid is six, and she still isn't over the unexpected death of a pet rat last fall. There was a lot of ugly crying and confusion in our home this morning.

No parent likes to see their kid that upset.

Ugly crying kid or no, I had a lot to get done today, and in the process I bought the new record from one of my two all-time-favorite bands. I've been trying to keep the perma-grin off my face in front of the kid who is still struggling, but it's hard. I had planned on writing a whole blog about how music affected who I became and what I write, but you know - dead mouse.

The next thing that happened was, I went to the mailbox and found the most amazing thoughtful gift from the people I work with at Dirge Magazine. I recently wrote about how I shelved a project I'd been working on for too long and started a new project I was excited to write and totally in love with. In the biggest vote of confidence I could get from a fellow writer, I got a custom made pendant with the title of my WIP done in the perfect lettering for the vision in my head (H/T: Torture Couture). 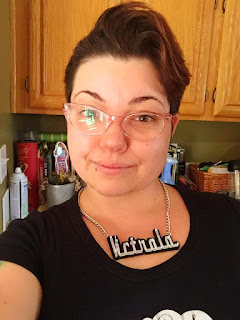 So instead of writing about how punk rock made me, and made my writing, and made a lot of things (we'll get to that next week, possibly). I want to take a minute to talk about the people I surround myself with. You don't have to spend long on Facebook to realize that there are more than a few writers who love to see others fail, who enjoy saying horrible shit to people, who are just cancerous to the community. They're everywhere. If you're lucky, you've only encountered them after they've been an asshole to someone else.

The people I've got in my little bubble are the opposite. I'm friends with people who offer to read for each other, who talk positively about other writers, who give me super meaningful gifts telling me that "Now, you CAN'T quit." I've got family that supports my writing and the late nights, and the neuroses that comes on when I'm waiting to hear back about something on sub.

I don't know how writers who don't have that stick with it. I don't know how you get through this gig without a ton of awesome people lifting you up and helping you out. This isn't exactly a plea for us all to be kind to each other (but hey, could we?) but more of a long winded appreciation for the good people in the writing community, and the constant bouying we provide each other.

It's hard to keep perspective when you hit the half way point of a story and you feel like the worst writer who ever lived. Maybe you're used to rejection letters, but you get one on a bad day and it's back to the way you felt on the fifth one (not the first one - because let's face it, we all expect the first one). But if you've got good people around, shit still feels pretty good most of the time.

Now that I've got you all hopped up on good feelings, who's buying me a drink at Boucher? Eh? Eh?

Yeah. A positive group supporting what you do makes a huge difference.

Also, sorry about the mouse.