There are a few things I want to discuss today:

Why aren't more writers using Snapchat? Or if they are, why can't I find them? I feel like there's some potential here for brand building (yes, I know that phrase is an anathema to some, but I can't think of a better one right now). At the very least, we can have some fun with Snapchat. 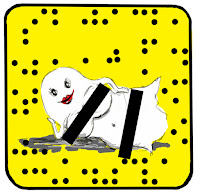 I am so very tired of Facebook and Twitter. These days, my social media app of choice is Instagram, but I've been playing around with Snapchat a little bit lately and now that I understand it a bit better, I like it. Being a writer, the "story" aspect of it intrigues me. Sure, most of the people I follow (myself included) post silly little snippets consisting of puppy dog filters and funny voices, but what if we took it a step further and really made a "story" of it? Quick, off-the-cuff stuff that follows some sort of narrative, even if its just an occasional glimpse into the snapper's life. It doesn't have to be complicated, but does require some creativity and maybe even some scripting.

Well, maybe not scripting. That seems at odds with the spirit of Snapchat. I'm attracted to the spontaneity it encourages and also to its temporary nature. Sure, I know people can screen save and whatnot, but in general, a post is automatically deleted in 24 hours. It allows me the freedom to post things I might not post elsewhere. I'm less image-conscious on Snapchat. I have the sense that I'm snapping into the void (which, considering my minuscule audience, I am) so I just post whatever I feel like.

I'm no Snapchat expert (my hairstylist had to teach me how to use filters yesterday) so I won't try to educate you. But if you're game, follow me: hollywestwriter. Let's have some fun with this.

2) I'm not sure I mentioned it here, but I'm an Anthony Award nominee. I KNOW. I'm thrilled to pieces and still can't quite believe it, even though I found out months ago.

On her way home from a night of partying in the valley, a troubled young movie star hits a bicyclist on Malibu Canyon. Does she stick around and take the heat or does she run? Oh boy, you don't know the half of it.

This post turned out a bit more promotional than I'd intended. Sorry for that. But my own take away here is that I've never really considered myself a short story writer. Mostly, I write them for charity anthologies and while I'm happy to do it, I sometimes wonder if the time it takes away from other projects is worth it. After this year, however, I'm convinced it is. "Don't Fear the Ripper," which was originally written for a charity anthology, was picked up by a much larger, paying publication, and this, combined with the Anthony nomination, it's the highest profile piece I've written, including my two novels. Sales, of course, might be another issue, but sometimes, my writerly self-esteem needs a boost. This was a big one.

Until next week, folks. In the meantime, FOLLOW ME ON SNAPCHAT.