Murder in the Pool

Here's a few films that are fun to watch in July and August, all featuring swimming pools and one person killing another. It's summertime, the late 60's, the south of France. Alain Delon and Romy Schneider look their best as a vacationing pair renting a huge, gorgeous house. They seem to be in love and have a lot of time on their hands.  They both like to swim and frolic in the property's spacious pool.  Enter Schneider's former boyfriend, a wealthy music executive, who brings along with him his pouty teenage daughter (Jane Birkin).  The ex seems to still have designs on Romy, and Delon, though laid back, may not take too kindly to these intentions. Jealousies, resentments, and rivalries simmer.  If you want to spend two hours with decadent people living it up in hip late sixties style, knowing that the dream summer will not end well for them, this movie is pure candy.

The murder here seems to be something that occurs on the spur of the moment, because opportunity presents itself, but it is a killing about as cold-blooded as a killing can be. 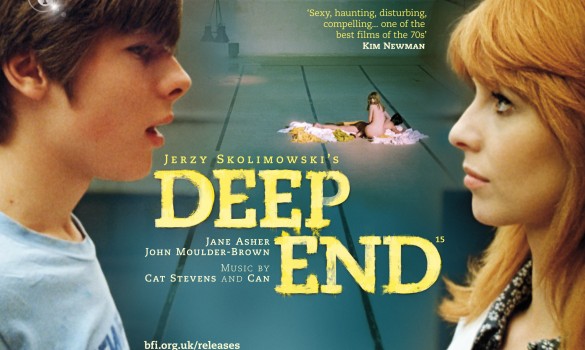 I'm still not sure why this film is not better known.  Set in London, it's a disturbing and blackly funny film that charts one teenage boy's sexual obsession for his fellow bath house worker. The woman is older than him but young, in her mid-twenties, and she has a boyfriend her own age and much more affluent than her dangerously earnest admirer.  John Moulder Brown (superb and creepy) plays the boy, Jane Asher the woman.  The less said about how this movie's story unfolds the better, but it's enough to say that it keeps you queasily engaged for its entire running time.  And the murder, which occurs at the very end of the movie, in a pool filling up with water, is one you won't forget. It's sad and messy and upsetting.  Death in a pool has never come in a bolder shade of red. 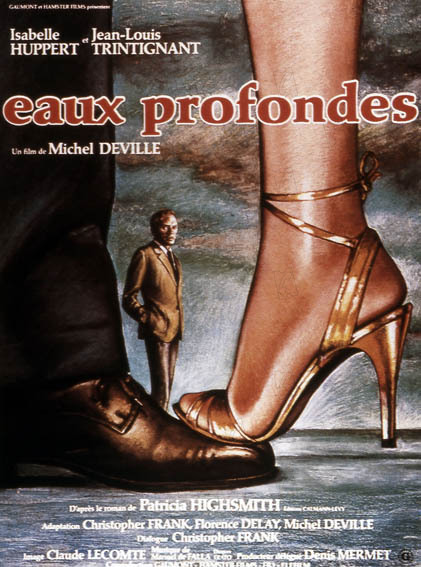 Adapted from Deep Water, the Patricia Highsmith novel, this is a wonderfully perverse film about a very odd marriage.  It's hard to track down in the US (I got it as a DVD copy, in good condition, from a grey market seller), but it's worth finding. French greats Isabelle Huppert and Jean-Louis Trintignant portray the married couple, and you're never quite sure whether he accepts, or even condones, the erotic shenanigans she keeps engaging in with other men. I say condones only because, though not a voyeur, he keeps inviting her potential lovers over to their house for dinners with the both of them (And he's the one who cooks the dinners!). But this is Highsmith land, so you know nothing is what it seems and the face people present to the world is hardly a reflection of what's going on inside their minds.

Features an extended and pretty brutal, hands on hands, forced drowning in a pool. The murder in this takes place on the deck around a pool, not in the water proper, but that's close enough since so much of the action revolves around what is in fact the title of the movie.  Charlotte Rampling plays a British crime writer who during the height of summer gets to use a house that's in the French countryside. Her publisher, a fellow Brit, owns the house, and he's let her use it so she can have a quiet place to work on her next novel.  All goes well until her publisher's half-French daughter shows up, and this young woman proves to be almost stereotypically French. She's sexually promiscuous, loves to lounge naked by the pool, and overall is an apparent hedonist in every way.  She's everything the buttoned up Englishwoman is not.  When a man both may be interested in enters the scene, well...

That is, if what we're seeing is happening and not a product of the crime writer's imagination.  Swimming Pool does not provide the closure you expect in a murder tale, but it's the kind of movie that rewards multiple viewings and improves each time you see it. It's a good look at a particular type of crime writer and how that writer's mind may be transforming the dross of everyday life into the material for crime fiction.

A Bigger Splash loosely reworks the plot of La Piscine.  Except this time we're in southern Italy (the island of Pantelleria, between Sicily and Tunisia), in summer. Tilda Swinton plays an ex-rock star who has lost her voice and is spending time in a lovely house with her current boyfriend, Matthias Schoenarts.  Enter their mutual friend and her ex, Ralph Fiennes, who comes with the daugher he's just getting to know, Dakota Johnson.  In the most luscious of locations, with much sexual tension in the air, the four people circle each other and couple and uncouple, and once again things climax with one person drowning another in a pool.  This is a visually sumptuous movie and it's a pleasure just to sit back and watch masters like Tilda Swinton and Ralph Fiennes do their thing.

Five movies, five pools, a number of watery deaths.  For sheer summer movie escapism, you can't do much better.
Posted by scott adlerberg at 3:00 AM

Email ThisBlogThis!Share to TwitterShare to FacebookShare to Pinterest
Labels: Pool Murders in Movies