When Comics Told an Entire Story in Every Issue 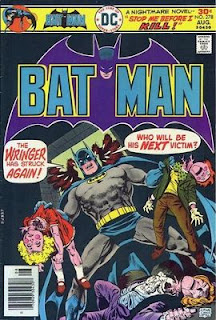 With DC Comics's new Rebirth initiative this summer, there is some excitement. Perhaps the company is going to return to some of what made them great: telling good stories with awesome characters.


Other than the flagship title--Rebirth #1--other titles are getting the 'rebirth' treatment. Unfortunately, they are coming across as 0 Issues, books that are meant to introduce storylines but not fulfill them. That's why I tend to wait for the trade paperback collections.

Now, contrast that with an issue published the summer of the American Bicentennial. I recently picked up Batman 278 at a comic convention. Here are my thoughts on it and how it told an entire story.

Anyone else wish they'd do that again?


The cover date is August 1976, but the ads inside the book indicate the street date as May 1976. The author is David V. Reed with art by Ernie Chua and Tech Blaisdell. The title is “Stop Me Before I Kill.” The villain in question is someone that they call The Wringer. There is a partner for Batman, but it’s not Robin. The man’s name is Inspector Kittredge from New Scotland Yard. He’s there riding shotgun with Batman on his nightly excursions and he wants to have one of Batman’s more bizarre cases. Enter the Wringer.

I’ll be honest, The Wringer was a bit of a cheesy villain. He wears green leotards with a purple hood/robe with eyes cut out so that the hood can act as a mask. Batman and Kittredge are presented with a few bizarre clues all dealing with little dolls that walk and talk add up to a rather interesting conclusion. Surprisingly one point, Batman crushes the Batmobile into a truck to stop it with no apparent damage to the Batmobile. Must be made of something really hard.

Inspector Kittredge is staying with Bruce Wayne at the mid-70s Bruce Wayne foundation penthouse. Always love the way this building was built with huge giant tree in the middle. Of course, if you find the one issue where the breakdown with the tree really is, it’s a series of elevators and walkways.

Naturally, Bruce Wayne is pretty far ahead of Kittredge, but he is not Bat-God that he is nowadays. One of the neatest things is that Bruce Wayne and Inspector Kittredge go to the Bicentennial Expo the Gotham Coliseum. Sitting as we are 40 years after the bicentennial summer, I am fascinated with the comics that were released in the summer of 1976. I just so happened to find a few of them at the SpaceCity Con in Houston over Memorial Day weekend.

I have to say, the art work is pretty decent. Very kinetic especially with the use of the “grayscale” version of characters to indicate starting position versus the ending position. And of course I love it when the book characters manage a repartee as they’re punching out the bad guys. My favorite line is got to be when The Wringer— who has strong hands — throws what appears to be a lamp base at Batman. The Dark Knight Detective picks up a fireplace poker and swings and hits the lamppost. Batman’s quip “You can pitch them – can you catch?” And Batman says it with a smile. Yes, Batman used to smile!

The closing panels, with Batman’s reasoning, is, frankly, cheesy. But, in 1975, where young readers were given clues to the capers, it may have been just the type of thing they were looking for.

Also noted at the end of the comic book is the Daily Planet/Direct Currents column. This is when you got to read about a few of the titles coming up, the closest thing you had to the internet back then. There is something charming when the titles include Justice League, Hercules, DC Superstars of Space, Kung Fu Fighter, House of Mystery, Metal Men, and Ragman. The trivia quiz for this issue is the following.

Villains are all the rage these days so let’s test your knowledge on some of ours. Do you know the real names of

Note: you gotta love the fact that Joker’s first name, back in 1975, would not be known. In fact, I think it’s this summer 2016 when DC is supposed to announce the real name of the Joker. I could tell you my thoughts on that — don’t like it — but that’s another blog post altogether. But now are focused on Batman of 1976. Cheesy, but a really fun time.
Posted by Scott D. Parker at 1:00 AM

Tara Man. I wasn't reading comics at that time, having stopped mid-Sixties, not to take them up again until late Eighties, but I don't recall a bad guy named Tara Man.

Actually, it's a misspelling. The name should be Terra Man. https://en.wikipedia.org/wiki/Terra-Man. He's a cowboy sort of guy.