Dharma Kelleher writes about "renegades, outlaws and misfits," but what's immediately clear upon cracking open her debut novel, IRON GODDESS (out from Alibi on June 28), is that she also writes characters with heart. Shea Stevens is an ex-con who's worked hard to make a happy life for herself, only to be sucked backed in when her bike shop is burglarized and she has to confront her troubled past.

I'm delighted that Dharma graciously agreed to an interview about IRON GODDESS, how her life experiences inform her writing and diversity in crime fiction.

HW: Tell us, briefly, what IRON GODDESS is about.

DK: IRON GODDESS follows Shea Stevens, an ex-con and custom motorcycle builder, whose finds that her shop has been broken into, an employee shot and three custom bikes stolen. She immediately suspects the Confederate Thunder, an outlaw biker club once run by her father.

When Shea reaches out to her sister, who is married to the club’s current president, she learns that the same drug dealers who robbed her shop have kidnapped her niece. Shea reluctantly agrees to join forces with the Confederate Thunder to save her niece and recover the stolen bikes.

HW: There are a few LGBT characters in the book, and Shea herself is a lesbian. While such characters exist in mainstream crime fiction, they are few and far between. Was it important to you to write a character that could serve as a role model of sorts or were you simply interested in writing a good story?

DK: I wanted both. I’ve read a LOT of lesbian fiction where the story focuses on the protagonist’s sexuality. But most thrillers and other crime fiction with a straight protagonist doesn’t focus on their sexuality. I wanted a lesbian protagonist where her attraction to women is not the most interesting thing about her and isn’t a leading part of the story.

Yes, Shea is a lesbian, but she is also an ex-con who grew up in an outlaw biker family. She runs a shop for second-chancers that builds custom bikes for women. Her relationship with Jessica is the least interesting thing about her.

HW: How does your own life experience inform your writing and the themes you want to explore?

DK: I came out as transgender about 25 years ago in the Deep South, so roughly half my lifetime. My family rejected me and even after all this time, our relationship is troubled. So I wanted to explore the idea of family estrangement, dysfunction, and reconciliation.

Also, I’ve been a biker for several years now and love the biker subculture, though there are some very dark and sinister parts of it that are fun to explore in fiction. There is a lot of camaraderie and solidarity, but also rampant racism, sexism, and homophobia, not to mention a lot of substance abuse and violence.

HW: IRON GODDESS is set in the biker world, so the crime fiction genre seems an obvious choice. But you’ve been writing for years and you’re an avid reader, so I’m curious if you considered other genres for Shea?

DK: I did write an early attempt at a contemporary, almost chick-lit style novel which featured both Shea and Rios, but the characters were much different than they are now.

HW: Who are your influences, both in and out of the genre?

DK: So many influences. Lawrence Block, for starters. Both his Matt Scudder and Bernie Rhodenbarr series are wonderfully written. I love Elmore Leonard and the complex characters he creates. Jim Butcher (of Dresden Files fame) has an unrivaled talent for vivid description with an economy of words. And more recently, I have fallen in love with the writing of Christa Faust for her unconventional characters.

HW: Job-wise, your background is diverse: you have a degree in journalism and have worked as a news director, a construction worker, a goldsmith, a caregiver and a web developer. Given the breadth of your experience and interests, is working as a full-time writer something you’d like to do?

DK: YES!!!!! I have enjoyed most of the fields I have worked in for varying reasons, but my first love has always been creative writing.

I first started as a teenager typing out short stories on a manual Smith Corona typewriter and reading Lawrence Block’s fiction column in Writer’s Digest magazine.

Then I fell away from it for the better part of 25 years to get my sh*t together. For the last ten years, I’ve buckled down to master the skills that creative writing requires, so as I turn 50 this year, I finally have a book to show for it.

HW: What’s next for Shea and/or your own writing?

DK: In the next novel, Shea finds herself forced to infiltrate an all-women’s motorcycle club as a confidential informant to find out who’s been selling lethal drugs laced with strychnine. My editor and I are still working on a title, but it promises to be filled with lots of plot twists and action.
I have some ideas for future novels in the series as well. So we’ll see how these first two do and go from there. 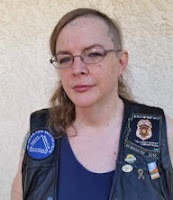 Dharma Kelleher writes gritty tales about outlaws, renegades, and misfits. Her hobbies include riding motorcycles, picking locks and getting inked. Her debut novel IRON GODDESS will be published by Penguin Random House’s Alibi imprint on June 28, 2016. Learn more about her and her writing at dharmakelleher.com.
Posted by Holly West at 3:00 AM

Dharma, thanks so much for the very generous mention!

By Scott D. Parker A couple of weeks ago, I was talking to my cousin and he asked about any upcoming books I’ve written. I mentioned “...