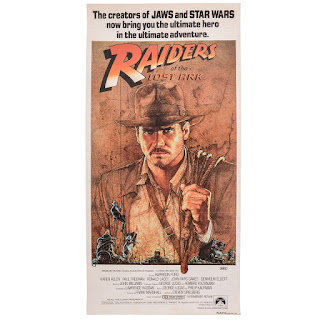 Thirty-five years ago tomorrow, the creators of Jaws and Star Wars introduced the world to the Ultimate Hero in the Ultimate Adventure. His name was Indiana Jones and the movie was Raiders of the Lost Ark.

It’s a safe bet that Raiders is on most people’s list of greatest movies of all time. It’s on mine. Top 5 for sure, probably Top 3 or so…but I can’t really think of another I like better. Well, except Star Wars. But as a movie, Raiders is probably tops for me.

Many readers who come to DoSomeDamage are also creators. We know what it’s like to hole up in a room and create our stories out of our imaginations. We can look at a movie like Raiders—which seems so effortless—and wonder how the magic was made. We long to be a fly on the wall during story conferences.

Well, guess what? You can. (And you can also go back in time!)

In January 1978, George Lucas, Steven Spielberg, and a young Lawrence Kasden met for a few days to talk over this new movie featuring the hero Indiana Smith. It is utterly fascinating to read the transcripts of these meetings and see how much effort went into a final product that, as I said, feels so effortless. When I first learned about this PDF back in 2009, I eagerly devoured the entire thing.

You want to know how genius ideas happen? Hard work. Long work. And a few sparks of inspiration
.
Here’s the link. It’s a PDF.

So, celebrate the 35th Anniversary of Raiders by watching the movie and then read the story sessions.

Oh, and I’m doing something interesting: I’m reading the novelization. I either never have or did and can’t remember. That was the summer between sixth and seventh grade. I want to see what, if any, liberties Campbell Black took with the story and the character before Indiana Jones exploded and became what he is today. I’ll report back when I’m done.
Posted by Scott D. Parker at 1:00 AM

I remember seeing it like it was last week. A real thrill ride.

It's a hoary old saying, but just as true if converted to movies: easy reading is hard writing.