The Narrative and the Talisman

Like America, I have a complicated relationship with guns. One of the first memories I have of my father is him shooting a Colt Junior automatic in the basement when I was six years old. The last memory was the call to tell me he’d committed suicide with a snub nose .38 revolver.

So when Eric Beetner asked me to contribute to a collection of crime stories without guns, I was eager to join. I own firearms but I don’t keep them in my house. They’re in my stepfather’s gun safe. I have been assaulted, but the last thing I would have wanted at the time was a gun. It was three on one. I left with a bloody nose and one of them with a wrenched neck. None of us died that day. But that’s just my experience. I wouldn’t force that opinion on anyone else. Ten years of boxing and grappling in a dojo where the teacher made us practice every move on him, someone who had been stabbed, shot, and fought bareknuckle in Burma, I feel much more comfortable in possibly dangerous situations than I ever did when I carried a gun.

In stories, guns are instant tension. They appeal to our fears and desires for power. Chekhov’s “law” was that if you see a gun in the first act, it must go off in the third. Which has its own problems. Why can’t it be a red herring? What about Hitchcock’s adage about suspense? If a bomb goes off, it’s a surprise. If we know it is ticking under the table, that’s suspense. I’ve written stories where the gun doesn’t go off, and readers have told me how the suspense gnawed at them long after they stopped reading. But with no gun at all, you have to look elsewhere for that fix. For my Denny the Dent story, “The Final Encore of Moody Joe Shaw,” I chose different avenues of suspense. Is someone trying to kill the sweet old lady who’s hired Denny to clean up her mangled fence? She’s based on a woman I used to deliver groceries to in college. The real Mrs. Kolb worked for Houghton-Mifflin and loved books, so it’s fitting that now she’s in one. She didn’t have jazz records, but first editions of Hemingway and many others, and I wondered if someone pilfered her shelves when she died. I was out of state when it happened, and only learned of her death long after, but the mystery formed in my head, as they do.

The other source of suspense is the yearning that Denny’s friend Ike feels for connection, which for me, was the stronger. That sense of loss and what might have been comes from the death of my father, and that we never fully reconciled. He gave me the chance, when he had made his decision, but I was too young and headstrong to see it then. So I had a well to draw from.

I didn’t sell my guns or bury them in the ground when he killed himself. Guns are a tool, it’s our brains that are the problem. We mythologize them. The American hero is a lone killer with a gun. How many stories end with a man setting off to right things with his gun? It’s a narrative we’ve embraced, so that when our problems are too complicated to shoot our way out of, we shrug our shoulders and say “what ya gonna do?” There are few easy answers. We say we admire gumption, then why do we love stories where instead of hard work, the hero just kills everyone giving him static? Some of my favorite stories do this. It’s become The Narrative.

And who can change the Narrative? If stories matter, then we who write them hold some responsibility to change its course. Does the mere presence of a gun in a story inspire violence? I don’t think so. If it’s a magical talisman that solves all our problems and the stories end before the consequences of violence are explored, then perhaps it can. If the villain is simply “evil” and exists for the hero to kill with impunity, then maybe it does. My upcoming novel BAD BOY BOOGIE from Down & Out Books does not shy from the consequences. Jay Desmarteaux enjoys meting out vengeance, and those around him have used that to fire him like a hate-seeking missile at their enemies since he was a child. The scars from vengeance run deep, and an eye for an eye leaves everyone blind. And if you think “consequences” is “killing ten bad guys every novel in a ten book series just means the hero is a lonely whiskey aficionado,” I direct you to Lt. Dave Grossman’s excellent book on the subject, ON KILLING: THE PSYCHOLOGICAL COST OF LEARNING TO KILL IN WAR AND SOCIETY. There are people who can kill without being deeply affected; in the end, most are in prison or hold long-term careers in the military where their skills can be directed toward socially acceptable targets.

Does this mean we can’t enjoy a good action story? I hope not. I love reading them and I love writing them. But part of me is glad that the new action tale involves grown men in leotards flying around shooting lasers or webs out of their hands and moving battleships with their minds, where the villains are defeated and imprisoned rather than blown away. Maybe the kids growing up on these will see a different Narrative than those of us who were weaned on Rambo and Schwarzenegger mowing through a small city of stuntmen? Say what you want about the immaturity of superhero stories, but the part where the bad guy is never truly defeated, and sometimes we have to join forces with them, even though we have irreconcilable differences.

That sounds a lot more adult than the story where one bullet solves all our problems. 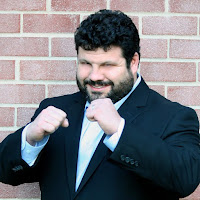 Thomas Pluck is the author of Bad Boy Boogie, a Jay Desmarteaux crime thriller coming from Down & Out Books in 2017. He has slung hash, worked on the docks, and even swept the Guggenheim (not as part of a clever heist). Hailing from Nutley, New Jersey, home of Martha Stewart and Richard Blake, Thomas has so far evaded arrest. He shares his hideout with his sassy Louisiana wife and their two felines. You can find him online at www.thomaspluck.com and on twitter as @thomaspluck.
Posted by Holly West at 3:00 AM