Adam Howe is an author I'm glad I believed the buzz about.  I picked up his collection of novellas, Die Dog or Eat the Hatchet, based on the good things I'd heard about it and because I'd enjoyed reading some blog pieces he wrote for Jed Ayres' Hardboiled Wonderland site.  It was obvious from his writing there that he has a funny, incisive sensibility, a view of the world that comes from a sharp, sometimes threatening, angle. All of this is on full display in the three novellas in Die Dog, a collection that mixes horror with satire with noir with pulp with a complete lack of narrative inhibition. I had a great time reading the book and raced through it. What's clear is that Howe, with only Die Dog and an earlier novella collection called Black Cat Mojo under his belt, is an accomplished storyteller and quite a craftsman - a writer in total command of his extreme material.

I had the chance to talk with Adam about his books and the films and writing that have influenced him.

SCOTT ADLERBERG: When did you start writing, and did you start out writing the kinds of stories you write now?
ADAM HOWE: started writing at an early age, even dictating stories to grownups before I could write myself.  My mum recently sent me one of my earliest efforts, about a bulletproof werewolf.  Illustrated, no less.  According to my scrawled signature (maybe it’s an autograph, I was an ambitious kid), I was six-years old when I wrote this masterpiece.  So yeah, it seems I was writing much the same shit, just without the sleazier elements of my current work – that’d be worrying, a six-year old writing about dwarf porn stars and sodomite orangutans.  As a kid, I was drawn to horror.  I’d haunt the horror section at my local video store, soaking up the lurid box art, and write stories based on what I imagined the films to be.  My parents divorced when I was very young, and I moved with my mum to her home country of Australia, while my dad stayed in England – so maybe I was filtering my anxieties through horror.  More likely I was just hardwired for horror.  Most young boys like blood and guts and nasty shit.  I just never really grew out of it.
It’s apparent that movies, B-movies, horror movies, are something you love and that you draw upon them perhaps as much as fiction as an influence?  What kind of movies did you like growing up, when you were 12, 13, a teenager?
Hey man, I like good stuff too!  But yeah, busted, I’ve got a soft spot for schlock. As a kid, the movie that made the biggest impact on me was Jaws, after which I was fiend for killer animal flicks, most of them Jaws knock-offs, and monster movies.  At a way-too-young age, my mum innocently rented me a video double-bill of An American Werewolf in London and John Carpenter’s The Thing, which I watched alone.  She monitored the first five minutes of American Werewolf to check it was suitable for an impressionable young child.  The opening scene in The Slaughtered Lamb seemed harmless enough, so she left me to it.  Moments later, I was traumatized by the sight of a werewolf savaging David Naughton and Griffin Dunne on the moors.  In terms of graphic content, American Werewolf and The Thing are a considerable step-up from Jaws, and it’s fair to say they blew my tiny mind.  But after that, I couldn’t get enough.
I subscribed to Fangoria magazine, pinning the pullout posters to my bedroom wall.  During the UK’s ‘video nasty’ hysteria, many of the movies described in Fango were either slashed to ribbons by the censors, or banned outright, and it was hard to track down a lot of this stuff.  Again, I used my imagination, writing my own versions.  Wish I’d kept those stories.  It’d be interesting to see how my bootlegs measure up to the real McCoy versions.
Around age eleven, I moved back to England, where under my dad’s tutelage, I received a crash course in action movies, and was fortunate to be around for the Golden Era of 80s action – what a time to be alive!  I particularly enjoyed producer Joel Silver’s oeuvre, and the early work of Steven Seagal.  I pity the kids of today for their lack of potbellied, ponytailed heroes. 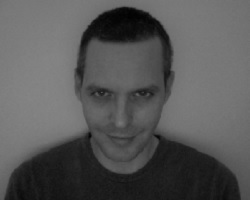 Each novella in Die Dog has, in some way, to do with animals.  Or creatures anyway, that may or may not exist.  In each case, having an animal in the story adds a great element of unpredictably.  You never know what an animal, or skunk ape, will do.  Any idea where this interest, engagement, with animals comes from?  Is it an interest that extends outside fiction, like to pets or an interest in wildlife?  Did you want to be a biologist when you were a kid?
The animal motif in my work came about after I wrote the story "Of Badgers & Porn Dwarfs" for the Black Cat Mojo collection.  The story was inspired by a hoax news article, which claimed that celebrity chef Gordon Ramsay’s dwarf porn star lookalike had been discovered partially devoured in a badger sett.  The image of a dwarf versus badger battle royale was too good NOT to write.  I envisioned it as a scale version of the David Mamet-scripted killer bear flick, The Edge, in which Sir Anthony Hopkins and F.A.G. President Alec Baldwin fight a grizzly bear to the death.  After that, the floodgates opened, and a menagerie began stampeding from my brain.
As for where it really started?  I guess I never grew out of that boyhood phase of dinosaurs and predatory beasties; a rite of passage, I suppose, in which boys tentatively tests the boundaries of danger and fear.  Growing up in the Australian countryside, there was never any shortage of exotic critters.  I’d embark on backyard safaris, trapping venomous creepy crawlies in jars to keep in my bedroom (to my mum’s delight), or take to school for ‘show and tell.’
Today my interest in wildlife is much more casual.  I have a Jack Russell terrier called Gino, named after Steven Seagal’s character in Out for Justice.  I watch the odd nature documentary here and there.  YouTube clips of animals going berserk on live TV are always good for a laugh.  The interaction between man and beast is a constant source of schadenfreude.
As I’ve said, Jaws made a huge impression on me as a kid.  So initially I planned to be a shark hunter, like Quint.  I sang a mean Spanish Ladies, and even affected Quint’s habit of nibbling crackers and crushing beer (OK, soda) cans.  When it was pointed out to me that this profession didn’t end well for Quint – visions of Robert Shaw gargling blood as ol’ Bruce chomps his guts – I decided instead to become a marine biologist, like Hooper.  Unfortunately, Jaws had also implanted in me a mortal terror of the ocean, so that was a non-starter.  Somewhere along the way, I cottoned on that Jaws was fiction, that someone had written it, and so I chose the safest course of action and decided I’d become a writer. By Claire Booth I took a road trip yesterday to a nother city in California’s Central Valley to film an appearance on a TV show called The D...