Why I Went the (Sort of) Traditional Route

Holly's note: I was happy when Dharma agreed to write about her path to (sort of) traditional publishing since her route (and reasons for pursuing it) are similar to my own. Before we begin, some takeaways: Dharma sent queries to ninety agents and four were interested in pursuing her project. Four out of ninety. These numbers are depressing, but par for the traditional publishing course. The important thing to note is that querying widely is a vital part of the process. It doesn't matter that eighty-six agents didn't feel they could sell her book, it only matters that one did. And a good one, at that.

There's a perception that self-publishing is somehow easier and perhaps in some ways, it is. But it's by no means the easy way out and some of the rejection that occurs in the front end of the traditional publishing biz often happens on the middle and back end of indie-publishing in the form of cost, marketing and closed industry doors for self-published books (reviews, bookstore shelf space, awards and such).

Regardless, the work involved in writing and publishing books is staggering and sometimes demoralizing, no matter what path you take. Persistence and educating oneself about the business are some of the keys to success, but in the end, the most important key is writing the best book you can. Then, write the next book and the next.

But I'll shut up now and let Dharma tell her story.

There’s not a lot traditional about me. I’m a rebel at every turn. I’m a Zen punk, transgender, lesbian biker chick who’s done just about everything from broadcast news to web development.

So as untraditional as a I am, why would I publish my debut novel with one of the “Big 5” publishers? Especially with the popularity of self-publishing?

Goals
As a kid growing up in the 1970s and 1980s, I was writing short stories on a manual Smith Corona typewriter, religiously reading Lawrence Block’s Fiction column in Writers’ Digest, with dreams of one day publishing a book with one of the major houses.

Cut to 30+ years later and when I rediscovered my love of writing, that dream was still on my bucket list. 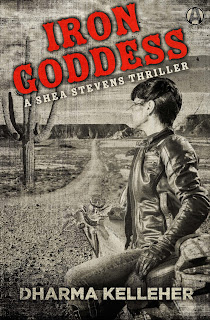 Part of it was the challenge. Writing a quality novel was daunting (because it’s freakin’ hard). Getting an agent (most agents accept less than 1% of submissions) was even more challenging. And the coup-de-grace, breaking out of the pack to sign a deal with a big name publisher. Yeah! I wanted to prove to myself that I could do it.

You can call it an ego thing or whatever, but that was one of my goals. Not simply to see my name in print, but to know that my book had risen out of the slush pile and caught a publisher’s eye.

You may have different goals where self-publishing or a small press might be appropriate. Maybe you’re a consultant looking for an additional income stream and you have the money to invest in a freelance editor, a book formatter, and a cover artist (don’t skimp on these), so self-publishing seems a better choice for you.

But for me, my childhood/bucket list goal put a +1 in the traditional publishing column.

I wanted my book to have a high level of professionalism. This meant that a professional editor (and maybe more than one) would go through my book on multiple passes, helping me work out any structural issues and plot holes, along with eliminating crutch words and typos.

An experienced professional book cover designer would create the cover that would immediately enthrall my target readers. A professional formatter would turn the books interior into a work of art.
And a publicity team would help me market that book and connect me with people, organizations, and events that I otherwise had no access to.

A small press would get me part of the way, but wouldn’t necessarily have the connections a big publisher would. At the same time, small presses often give more personal attention to debut authors than a traditional press. So a small press was still in consideration.

The self-publishing route was less favorable on this issue. The stigma associated with self-published books (caused by the majority of indie authors not hiring professional editors, formatters and cover artists) has blocked access to many networking and distribution channels.

So in this case, I gave points to both traditional and small press.

Money
Here is where the rubber meets the road. Writing is both a craft and a business. While I am no business guru, two mantras are burned forever in my tiny, twisted brain.

• It takes money to make money.
• Whenever possible, use someone else’s money.

Why should I pay thousands of dollars to a professional editor, formatter, cover designer, or publicity manager, when a traditional publisher could do it for me and the two of us can split the profits 50-50? And maybe even an advance to boot.

Some fear that signing with a traditional publisher or even a small press means giving up creative control, but it doesn’t have to. Not if you have a good agent.

Based on all of these factors, traditional publishing was the best route for my literary goals, professional standards, and financial situation. Small press (like Midnight Ink or Poisoned Pen Press) was a backup plan if I couldn’t sign with a big house. And self-publishing was a last resort. So I decided to swing for the fences.

The Deal I Struck
I sent queries to ninety agents, four of whom were interested. I signed with Sharon Pelletier of Dystel & Goderich, a New York–based agency with a solid reputation. After a few rounds of edits, she shopped my book to publishers for a few months.

I saw rejection after rejection from publishers who loved the book, the writing, and me, but consistently said they “didn’t know how to market it.” Turns out that’s code for “we ask for stories with more diversity but only buy manuscripts about straight, white men.”

Then my agent notified me that Alibi, a digital-only imprint of Penguin Random House, was offering me a two-book deal. Yay! Wait, what? Digital only?

Yeah, no print books. And yet they insisted as a matter of company policy that they purchase the print rights (perhaps to avoid diluting e-book sales).

I was torn. I wanted to see my book in print. On my bookshelf. Next to the Pulitzer I would one day win.

Teri Bischoff at Midnight Ink was interested in reading my manuscript after I pitched it to her at the WriteNow! conference.

I knew from talking with other Midnight Ink authors that Teri does a lot for her authors. Not uncommon for small presses with a limited stable of authors.

Compare that to the horror stories of authors who sign with a big publisher who are all but ignored because they’re not a famous celebrity with a huge following.

Then again, I had no guarantee of an offer from Midnight Ink. And because Alibi was part of Penguin Random House, they had access to resources that Midnight Ink might not due simply to PRH’s behemoth size.

It was a gamble either way. There are no guarantees in publishing, especially with constantly changing technology and thousands of new books published daily.

I read that article John Scalzi had written a few years ago all but calling Penguin Random House the anti-Christ over their four digital-only imprints. I also talked with several Alibi authors who loved what Alibi had done for them. And I had some deep discussions with my agent and my wife.

Ultimately, I decided a bird in the hand was worth more than the two in the bush. I signed with Alibi and I am glad I did.

First of all, I get 50% of net sales (minus my agent’s well-earned cut). And I retained creative control over editing, title, and cover design, as well as foreign rights, audio rights and TV & film rights. Because you never know.

My editors at Alibi have blown me away with their ideas about how to improve the story. The design team created a badass cover. And the publicity team is doing all kinds of things to spread the word about my book including designing marketing materials, an appearance at Phoenix Comic-Con, a blog tour, blurbs, BookBub (and related services) and much more.

My debut novel, IRON GODDESS, launches June 28, 2016. The support I’ve already received and the pre-sales at Amazon, Barnes & Noble, Kobo, etc. have shown me that going the (sort of) traditional route of publishing with Alibi was the right choice for me.

You have your own goals, your own professional standards (I hope they’re high), and your own financial situation. Make your own decisions. Live with the consequences. Don’t whine about them.

And in the words of Neil Gaiman, “Make good art.” 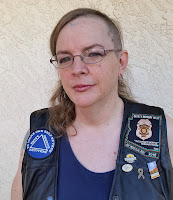 Dharma Kelleher writes gritty tales about outlaws, renegades, and misfits. Her hobbies include riding her motorcycle, picking locks and getting inked. Her debut novel IRON GODDESS will be published by Random House’s Alibi imprint on June 28, 2016. Learn more about her and her writing at dharmakelleher.com.

Great post, Dharma! And I agree, "Make good art." Congratulations on your debut novel -- I'm excited to read it!

Great post, Dharma. I felt myself nodding along to everything you said (not that I'm there yet but I feel the same way about publishing, goals, validation, etc.). Congrats and can't wait to read the book!