Doing Time: My Path to Publishing

I recently announced signing a two-book deal with Crooked Lane Books and when Holly West asked me to blog about my path to getting published, I thought—that’s nothing special. I did the same things every other author does, write, edit, query, repeat.

Holly’s request got me thinking. Why do I write the kind of stuff I do, namely crime fiction with a bit of a dark edge? After hours of navel gazing, I came to the realization that I’ve been preparing for crime writing my whole life. I learned about crime and the people involved in it from my time in prison.

I grew up on prison grounds as a kid. My father was a career Department of Corrections employee and as he moved from prison to prison, so did I. Some of my earliest memories are meeting my dad after his shift at San Quentin, watching an inmate crew at a Conservation Camp pull a black bear out of a garbage pit, riding in a wheelbarrow pushed by an inmate groundskeeper (serving life) and learning about racing pigeons from an inmate named Renell Lindsay. Not the typical childhood experience, but I didn’t know any different. I saw the darker side back then too. I witnessed my dad come home bloodied after being assaulted and watched him go out on escape details. 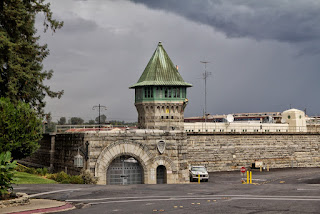 One of my first jobs, while going to college, was in Parole. And the man who helped me get it—Renell Lindsay, an ex-convict who went on to champion re-entry programs in the 1970’s. From there, it wasn’t long before I went to jail (as a probation officer) and then off to Folsom Prison.

When I started at Folsom, it was a time of rampant gang violence, stabbings, murders and assaults against staff. One of my first days on the job found me in a riot in the prison license plate factory. You’ll never look at a license plate the same way after one goes whizzing past. The pace of violence and bloodshed continued to the point where you begin to become accustomed to it, desensitized to the stabbings, slashing and shootings. The bonds with your fellow Correctional Peace Officers become deep and everlasting in a place like this.

After twenty-nine years, (Not all of it in harsh prison conditions. I helped deliver substance abuse treatment programs to inmates, transportation, classification, back to parole and other headquarters assignments where the bad guys weren’t wearing orange jumpsuits—they wore suits.) I’d had enough of corrupt legislators, lobbyists and one or two unsavory administrators.

What to do with all this background (or baggage, depending on your point of view)? I knew there were stories to tell and I’d been a crime fiction junkie for years. The two seemed to go together and the line between fiction and real life is pretty damn thin. So, I started to write and write. About two manuscripts in and I felt like I was getting the hang of this writing thing. I felt really good about it, until I began to query the work. <cue the crickets>

Rejection is a bitch! Being a fledgling writer, I didn’t know what I didn’t know. It would have been easy to give up, but working in prison thickens the skin—a handy thing for a writer. I began reaching out to other writers, learned more about the craft of writing and attended writing conferences. Most importantly, I continued to write.

I chose the traditional publishing route over self-publishing my work. The self-publishing avenue is great for some of my author friends and they swear by the freedom and total creative control of the process, from cradle to grave. I found a small publisher who was willing to publish my first novel, LITTLE RIVER, a human trafficking thriller set in the Caribbean. She turned me onto social media (and yeah, an old dog can lean new social media tricks) and it was a blast to see my book in a brick and mortar bookstore.

The publisher closed up shop and I knew that I needed something more to reach the next level in the market. I researched literary agents, heard horror stories of predatory contracts, agents sucking authors dry for excessive “extra services,” and never selling the author’s manuscript.

At a Book Passage Mystery Writer’s Conference, I listened to a panel of agents talk about what they look for in a client, how to pitch a story to get their attention and above all, don’t come off as a total douche-bag (that may not have been the exact wording). One agent really stood out to me, Elizabeth Kracht, of Kimberley Cameron and Associates. This woman had substance. She believed in her authors, gave them active support and knew the publishing industry. A year later, at the same conference, I had the chance to pitch my latest manuscript and Liz agreed to take a look, in spite of my sputtering elevator pitch.

After the conference, I shipped the manuscript off to an editor for a final pass because I didn’t want the thing to end up as birdcage liner. When it went to Liz, I was confident that the manuscript was as good as I could make it. Over the next six months, Liz and I went on an extensive back and forth on the storyline, plot holes and edits. Her perspective on the manuscript was such a tremendous help and when we were done, I knew I had someone who could champion this book and would have my back when it came to marketing the story.

Liz had a bite on the manuscript less than a week after she sent it out. Crooked Lane Books, a crime fiction publisher, made an offer on the manuscript and Liz arranged a telephone conference with Matt Martz, the Editorial Director. Matt explained the company’s editorial process and what I could expect if we entered into a contract. Matt’s experience and connections in publishing, distribution and author support were a perfect fit.

The novel, AT WHAT COST, is tentatively set to release later this year. I’m really excited how all this came together. Stay tuned for a cover reveal very soon. I’ve seen the draft artwork from Crooked Lane and it’s killer. I’ll post the book updates over at jamesletoile.com.

So, that’s my path to getting published. It may not be perfect, or the right way, but it’s mine. If a guy from prison can do it, so can you. Don’t give up the fight—keep writing. 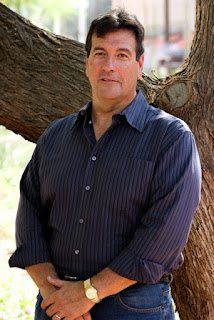 Author James L’Etoile’s crime fiction work has been recognized by the Creative World Awards, Acclaim Film and the Scriptapalooza Television Script Competition. His complex, edgy stories are fueled by two decades of experience in prisons and jails across the country. Realistic crime fiction requires an eye for detail while immersed deep within the darkest criminal elements. James brings these stories to life with his background in probation, parole, investigation and prison operation.  An experienced Associate Warden, Chief of Institution Operations, Hostage Negotiator and Director of Parole, James is unique among crime fiction authors.

Thanks for the opportunity for a guest post, Holly!