What DC’s Legends of Tomorrow Can Teach Writers


Rip Hunter is on TV.

For those that don’t know who he is, Rip Hunter is a time traveling character from DC Comics who debuted in the 1950s. (1959: thank you Wikipedia.) 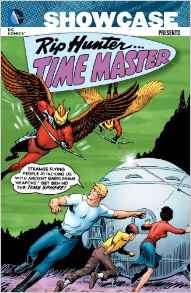 He is a deep bench character, one who even this life-long comic book reader wasn’t too familiar with by the time I started reading comics in the mid-1970s.It wasn’t until the Crisis on Infinite Earths storyline in 1985 that I even knew his name. I very much remember him from the Batman: The Brave and the Bold cartoon where the writers brought out all the deep bench character to team up with the Dark Knight. 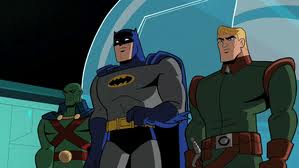 But that’s a cartoon, a mere step away from a comic book. Now, in 2016, Rip Hunter is a character on a live-action TV series, DC’s Legends of Tomorrow. The new show is a spin-off of the Arrow and The Flash TV shows. All air on the CW Network. In Legends of Tomorrow, Rip Hunter travels back in time and recruits eight heroes—six actual heroes and two villains—to battle the immortal Vandal Savage. Hawkman and Hawkgirl have their fates tied to Savage wherein he gains immortality each time he kills them. For millennia, the pair get reincarnated and find each other and the cycle repeats. Firestorm (actually two people merged into one figure, for those of y’all counting at home), White Canary, and The Atom round out the heroes. (BTW, he has the best reaction when the twist occurs in episode 1.) Captain Cold and Heatwave are the crooks and scene chewers par excellant. (“And this bunch must somehow form a family…”) Together, they’ll fight in various time periods of the DC universe, enabling other DC characters—still deep benchers—to have a turn in the spotlight. It’s already been announced that non other than Jonah Hex, the bounty hunter from the old west, will be on the show. It's awesome! 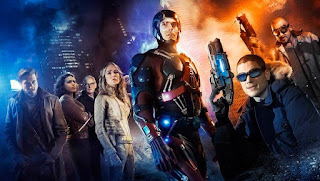 So, to recap, there’s actual live-action television show featuring super-heroes fighting an immortal villain…through time. Rip's up there. Far left. For a comic book person, this is a fantastic time to be alive and watching shows like this. For a comic book person, I never thought there’d be a Green Arrow show, a Flash show, and a Supergirl show. But, these latter three are basically well-known, or known enough to launch series.

Again, Rip Hunter is on TV. Heck, if you want to get really deep, the villain King Shark—think a huge man with a shark’s head—showed up on an earlier episode of The Flash this year. I’m well-versed in comic lore, but even I had to Google “Flash villain shark man” to get King Shark’s name. 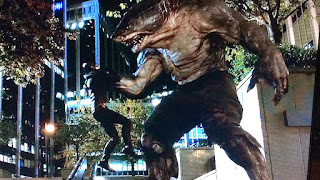 The point I’m trying to make here is this: the folks behind Legends of Tomorrow—Greg Berlanti, Marc Guggenheim, Andrew Kreisberg, and Phil Klemmer—wanted to make a show where time-traveling super-heroes fight bad guys through time. And they did it. They weren’t afraid to pitch the story. They probably said, “Hey, you know what would be cool? Time-traveling super-heroes!” “Yeah,” another one chimed in, “and we can play in the DC sandbox!”

They were fearless in their love for the show. They had to be, because they sold it. And it’s on the air for everyone to see.

What does this mean for writers and other creatives? If you love something, do what you’re passionate for. Infuse that project with all the joy you can muster. It doesn’t matter if it’s a little out there, a lot wacky, or something weird. Do it, for yourself and for those out in the world that love what you love. They’re out there, but it starts with you.

Rip Hunter is on TV.  Is anything impossible?
Posted by Scott D. Parker at 1:00 AM

Not the writers but costume designer, i found the all character costumes available in the market. Read here Legends of Tomorrow Costumes Blog

The World's Biggest Crime Fiction Convention: Coming to a Screen Near You

By Claire Booth I’ve missed a few Sundays and I thought I’d explain why. For the past four years, I’ve been involved in planning the 2020 ...