Cover Reveal: All Chickens Must Die: A Benjamin Wade Mystery

A little over a year ago, WADING INTO WAR introduced the world to private investigator Benjamin Wade. He made a cameo in THE PHANTOM AUTOMOBILES, but now it's time for his second solo mystery.

Back in May 2013, I wrote WADING INTO WAR, Benjamin Wade’s first story. I went on to write a couple of book featuring a completely different set of characters. Late that year, I wanted to return to the world of 1940 and Benjamin Wade. Thus, ALL CHICKENS MUST DIE was born. At the time, I hadn’t written THE PHANTOM AUTOMOBILES, Gordon Gardner’s first novel. The ending of that book meant that I had to fix up a few things here in CHICKENS. It proved to be a fun challenge.

The title of ALL CHICKENS MUST DIE, however, proved elusive. Very elusive. For the longest time—up to and including when I delivered the manuscript to my editor—I had no title. I can’t even say for sure how the phrase “all chickens must die” entered my head, but it did. And it stuck. With a title that would have been at home on an old 1950s or 1960s pulp novel, I wanted a cover that matched. I love the two intricate covers of WADING INTO WAR and THE PHANTOM AUTOMOBILES but I wanted a different vibe for this novel. After examining all the old novels I have here in my office, the concept of a solid color “main field” and a secondary color/field at top gave me the old-school pulp fiction look I wanted. For the longest time, I had a stock image of a silhouetted man, kneeling, and aiming his gun off screen. I liked it. A lot. You’ll see it in the future I assure you.

At my day job, David Hadley is our company’s graphic artist. We have many similar interests—Star Wars being one—and we stuck up a good friendship. Along the way, I’d ask him design questions as I tried to train myself in the art of cover design. I showed him my first concept. He appreciated the old-school look and feel and offered a few suggestions. Then, one day, he asked if he could just work with an idea he had. No problem. I was eager to see what he would do.

The cover was so much better than I had imagined. He used my kneeling man figure and introduced the arcing bullet you see on the cover. The kneeling man didn't really fit in this new scheme, so I suggested showing a man fleeing. Viola. Front cover done. He suggested the idea of the front and back covers showing one scene. He made it happen.

Presenting, the front cover of 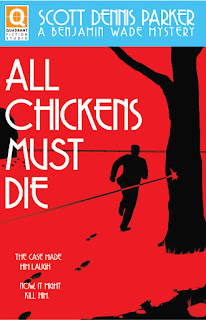 May 1940, the last days of the Great Depression, and private investigator Benjamin Wade isn’t exactly rolling in the dough. He doesn’t even have a secretary. So he’s in the unenviable position of taking any client that walks in his office.

Elmer Smith, a local farmer, has a problem: all of his chickens are scheduled for slaughter. He’s desperate to save his livelihood. He got a court injunction to slow the process, but time is running out.

Instead of laughing Smith out the door, Wade suppresses his pride to take the case. It seems like a simple, straight-forward paycheck. He zeroes in on a central question: What really happened the night police chased someone through Smith’s farm? Wade isn’t the only one asking that question, but he could be the only one who might die for it.

ALL CHICKENS MUST DIE is scheduled to go on sale Tuesday, 2 February, as an ebook. The paperback will follow later this month.