Thanks so much for coming back to read Part II.
I have to tell you a little secret - Alex Segura is one of the most supportive crime fiction writers around. And he's a super great guy.
When my editor and agent told me to go seek blurbs from fellow mystery writers, Alex was the first one I turned to and he was incredibly gracious and supportive and I'm very lucky to count him as a friend. (That's the secret part, you all already know what a great guy he is.)
And besides all that, he's a great writer. I love reading about his protagonist, Pete. If you haven't yet met him, I recommend you check him out, as well.
Here is the rest of our conversation.
Cheers!

ALEX: What are some of the series you like to read, or that influenced your series work?

KRISTI: When my first book came out my editor said “Fans of Laura Lippman’s Tess Monaghan series will enjoy this book” So of course I went out and read everything by Lippman I could get my hands on.

And now I’m obsessed, flat out crazy about Chelsea Cain’s Archie and Gretchen series. I am a huge fan girl of Cain. I first heard about her in Jon Jordan’s bedroom at Crimespree Castle. (I just sort of want to  leave that there, but I”ll explain!)

I was in his room with Todd Robinson and I think Jeremy Lynch and Jon and my husband and Jon was showing us his flat out mind-blowing collection of books and all those guys started talking about Chelsea Cain with this awe and reverence and I thought, “Who the hell IS this woman.”

It took me about a year to pick her one of her books for the first time after that and as soon as I read it, I was starstruck. Gaga. Fangirl. I love, love, love all her books.

ALEX: Isn’t it awesome to discover a “new” writer and be able to dive into their entire run? I love that. I am a huge fan of all of Lippman’s work, particularly the Tess novels. They were a big influence on my own writing - the ability to show a flawed, human protagonist who didn’t fall into some of the more overused tropes that have become repetitive in detective fiction. I think Tess feels very real, and i wanted the same thing for Pete - if not the same traits and life. I wouldn’t have written a word if I hadn’t read George Pelecanos’s A Firing Offense, the first in his three-book Nick Stefanos series. Now there was a flawed hero! And he had NO desire to be a detective, he just kept getting into trouble. Just as it began to feel like it’d become routine, Pelecanos ended the series and moved onto something else, which I respected a lot. The Dennis Lehane Pat and Angie books also really loom large for me. I liked how he portrayed a dysfunctional and sometimes romantic friendship, how vivid the Boston setting was and how nasty his villains could be. The books just felt creepy and dirty and they didn’t resolve cleanly. I’m really interested in the gray areas of life, and in books that don’t fix everything in time for the peaceful epilogue, and Pelecanos and Lehane are both masters of that. I also have to point to the Lawrence Block Scudder books - what a trip. Scudder feels like such a NY landmark by now, but those first few books were totally different than the last few - you’re on this epic journey with Block as he creates this entire world of people and places. I visited the diner Scudder hangs out in a lot just for fun a few years back - I don’t do fanboy stuff like that often, but I really wanted to experience it. It almost felt like I was hanging out somewhere an old friend visited. All these series share protagonists that aren’t detectives per se - and if they are, they’re not your typical fedora-wearing tough guys looking for a lost dame, you know? I think we have enough of those stories done remarkably well, so I’m always curious about the ones that come from a little left of center. 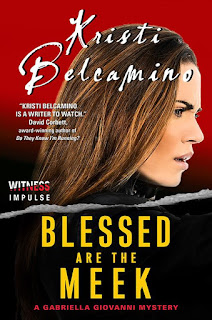 KRISTI: You sparked a thought here - I am not really doing this in my standalone, but in my series books, I also really wanted to write an Italian-American protagonist. I wanted to write somebody who I related to on that level. There have been a few really great characters like this. Nobody as badass as Jackie Collin’s Lucky Santagelo, but also Adriana Trigiani’s Big Stone Gap books showed Italian-American life. For me, in my series, it was important to have that background and culture and close family ties and big Sundaydinners for Gabriella Giovanni. And like her, I have two Italian-American brothers who are very protective of me and I think people might think it’s a little bit of a caricature. But there is a level of family loyalty in this culture. Not totally Godfather stuff, but I’ve had family members offer to go to bat for me on a level that might seem a little scary. I did go into that a little bit more in my fourth book and I really enjoyed it. It’s hard to walk that fine line between showing those unique cultural aspects and coming off like a cartoon world.

ALEX: I’m so glad you brought this up, because it’s a part of the Pete series too - in a slightly different way. If you read Silent City, you realize that Pete is Cuban-American. He was born in Miami to Cuban parents. But it’s not something that’s hammered home throughout the book - by design. I really wanted to show someone who had this heritage, was defined by this heritage, but was also an individual with quirks and a unique perspective, you know? It was challenging, because you don’t want to seem like you’re shirking his culture, but I knew a lot of people like Pete and I wanted to show that - a Cuban-American guy who does regular things (and some crazy, not-regular things!). I think that says a lot in its own way. It’s funny, because your answer got me to thinking about character descriptions - I try to go pretty light on them, for a variety of reasons. As a reader, I hate getting bogged down by long, descriptive ‘graphs explaining what someone looks like, what they’re wearing and so on, unless it’s relevant to the story. If it isn’t, skip it, I say. So, with Pete and his friends, I kept it pretty light - you know Pete is of average build with brown hair and he sometimes has stubble. But that’s it. I leave the rest to the reader to tinker with in their head as they go on this trip with me. I don’t think I even go into his friends’ backgrounds in much detail, though they are very vivid in my mind, because I want it to be a collaboration with the reader to a point. I like envisioning characters in my head when I read and get really gummed up when the descriptions weigh things down.

That’s a bit of a rant, but I hope my point is clear! I think it’s important to show not only where the characters are going and facing, but where they come from. Pete’s dad is a big part of Silent City and the whole series, and his Cuban heritage, while not front and center in Book 1, is a major part down the line. The past is always relevant to the present.

KRISTI: Nice! I TOTALLY agree with the character description philosophy, although my style is to put a bit more in than you - I like to read about the clothes a woman is wearing! : ) But not too much. I want the reader to come up with her or his own idea of what a character looks like which is why I am still - 15 months after my first book was published - chapped about my cover which has a giant face of a woman on it. It just kills me. What a wake up call to me that I would truly have no say over my covers. I’m still holding out hope that they can be repackaged one day - that carrot was dangled before me once -- but not sure how to make that happen.

Do you like your covers? You probably wouldn’t say if you didn’t, right? I guess at first I wouldn’t either but after BOLO books wrote about how he wouldn’t read my books at first because of the covers,I  I sent his blog post to my editor - they are pretty clear about how I feel about the covers! ; ) HA!

ALEX: I love my covers, actually - and I’ve been extremely lucky so far. Polis has been very proactive and engaged in terms of running stuff by me and explaining why things look a certain way. It also helps that they get the book, want to create a consistent series design and know the market. I couldn’t be happier with the first two Pete covers. Really curious to see the next one. In terms of covers in general, I do LOVE them, but I can’t say they make or break a purchase for me. They can definitely help - I think Sara Gran’s Claire DeWitt books have stunningly simple and iconic covers - but I would have bought those books anyway, you know? I think a great cover can be additive and a terrible cover can hurt your casual buys, definitely. I know people who won’t buy a book if they think the cover is off, which isn’t me, but that’s the way it is. I see the cover as a teaser trailer for what’s coming - either a key scene, moment or even feeling. It’s a really hard thing to do well, and I’m not a designer, so I’m always in awe of great covers and the people that make them.

I get what you mean about your first cover, though, especially if you want people to create their own mental picture of Gabriella - I think I’d be frustrated if that happened to me, too, because you want to keep some mystery in the reading experience.

I think this is a good spot to close out - thanks again, Kristi! This was an informative conversation!

Thanks for another shout-out Kristi. I do want to clarify that while covers do influence me, I try to make educated choices in my reading. The real problem with the first two covers of the Gabriella Giovanni series is that they look like self-published covers PLUS they don't scream crime fiction. At best, they probably made me think they were romantic suspense - which is not my genre of choice - so I didn't investigate further until I started to hear the Belcamino Buzz (yes, you can trademark that).

Like you discovered with Chelsea Cain, there are so many books out there, it's almost impossible to keep track of what everyone is doing and in that way, covers do influence reader's desire to investigate further.

The Belcamino Buzz!?!?! See, why I love Kristopher so much!?!
And thanks again for clarifying and for giving the books a shot ...